Turf Wars continue to take place in the fourth volume of the Splatoon manga, with Team Blue facing ever tougher opponents. They are participating in the Square King Cup, and there are a few familiar faces appearing as well.
This volume of Sankichi Hinodeya’s Splatoon manga chapters twelve through to fifteen of the story as well as one bonus chapter. 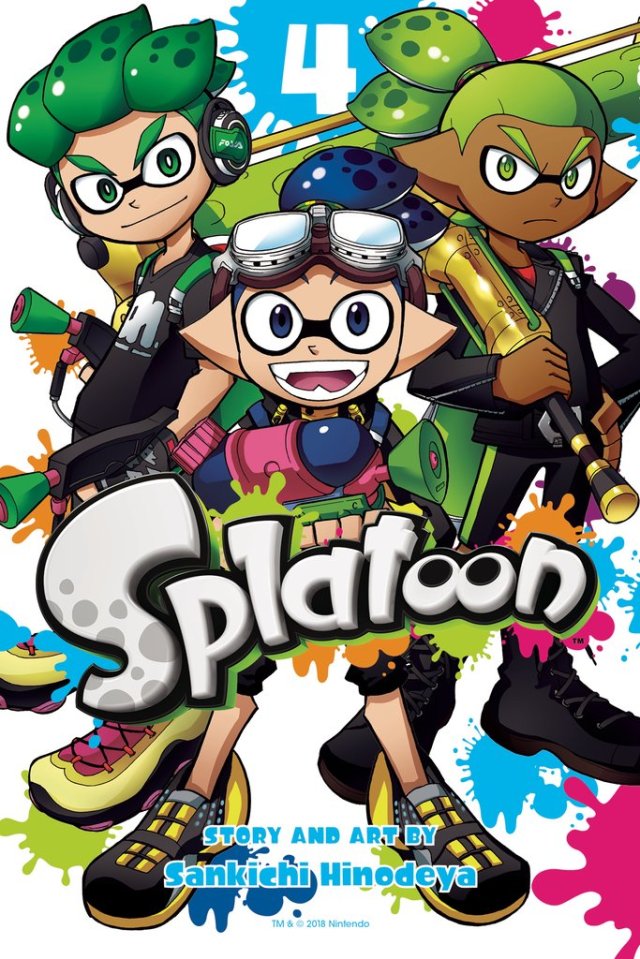 The preliminary rounds have come to a close! And Team Blue has made up. As the Inklings gear up for the main rounds of the Square King Cup, they must prepare for all kinds of teams that are way stronger than they are, and may even have to battle the undisputed Splatoon champion – the player known as Emperor!

So it is pretty much business as usual for Team Blue in this volume of Splatoon. Whilst they serve as the central characters, Team Yellow-Green (captained by Rider) and Team Gloves also get a fair bit of focus in this volume. In fact, Rider and Gloves even form something of a rivalry.
Team S4 has some of Team Blue’s most powerful opponents join forces, whilst Team Emperor are undisputed champions.

Amusingly, whilst everyone is in awe of the powerful teams appearing one after the other, Team Blue are fairly casual about the whole thing – particularly Goggles. That overly relaxed attitude might just be the key to victory, though…

Making their manga debut in this volume is Off the Hook. Unfortunately, Marina and Pearl are only present to give a play-by-play on the Square King Cup matches, so they don’t really have much of an opportunity to let their personalities shine through. Hopefully they’ll get a little more to do in a future chapter.

The Splatoon manga gives us some fun Turf Wars with its fourth volume, supplying plenty of humour with Team Blue just being their usual, ridiculous selves. It’s a nice contrast to all the other overly serious teams.

I enjoy writing, manga, anime and video games, so naturally here on my blog, you will find anime reviews, Nintendo news and other such things that I deem interesting.
View all posts by Rory →
This entry was posted in Manga and tagged Manga, Sankichi Hinodeya, Splatoon, Volume 4. Bookmark the permalink.