Thoughts on Yuri Is My Job! Volume 2

The second volume of Yuri Is My Job! continues telling us Hime’s story, as well as giving us a glimpse into her past.
This volume contains chapters seven through to eleven. 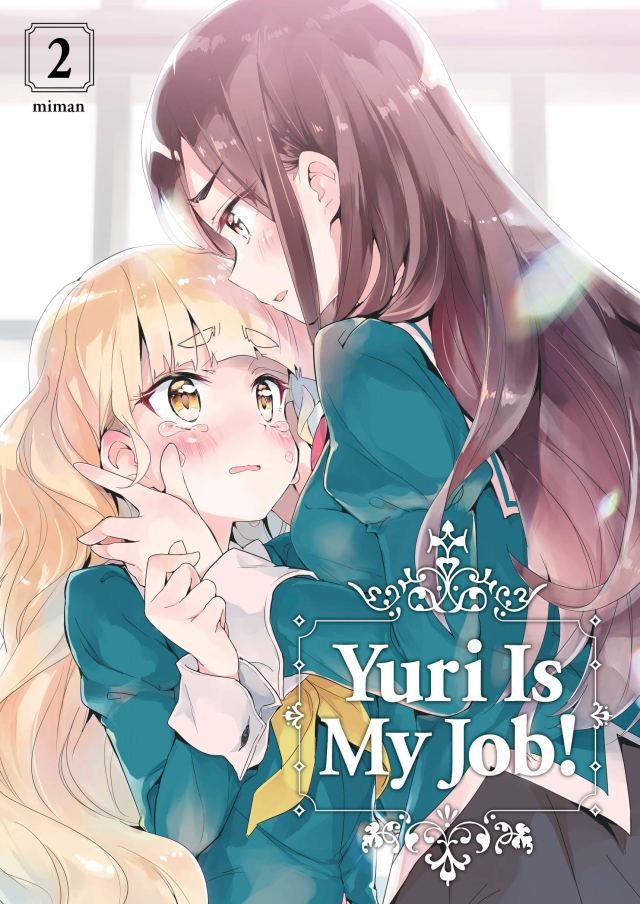 At the café atop the hill, newcomer Hime looks up to her elegant coworker, Mitsuki, but their work partnership leaves much to be desired! Hime tries to maintain her perfect-girl façade, but after causing so many mishaps – complete with spilled drinks and online rumours – Mitsuki finally sits her down for some real talk. Much to Hime’s horror, it turns out that the two share a deep history, and this reality shakes Hime to her core. Now she can’t seem to keep her head straight at work! Can she ever gain Mitsuki’s trust… and is it all even worth it?

This volume of Yuri Is My Job! starts with a flashback chapter, showing that Hime actually has history with one of her coworkers at the café. She didn’t pick up on that at first, but as soon as she realises, it starts affecting the work of both girls.
This leads to a case of history repeating, with Hime’s coworker trying to figure just what about Hime is real, and what is the façade she is putting forward.

The first volume had more of a comedic tone, but I’d say that this second one relies more on drama.  In this case, it is the relationship of Hime and her coworker that is under the spotlight.
How that all plays out is some pretty compelling stuff; Yuri Is My Job! has proven that it can do both comedy and drama decently.

This volume also sets up a couple of future story beats. There is the “Die Blume Der Liebe” – boiled down to its most simple terms, a popularity contest for the girls working at the café. The event in which the flower of Liebe Academy is voted for draws close.
Then there is Sumika discovering lots of photos of a certain girl on Kanoko’s phone.

The second volume of Yuri Is My Job! is an excellent follow-up to the first one, giving us a deeper look at the relationship between Hime and her coworker. The way that the events focusing on those play out is really quite satisfying. Particularly as we are given the chance to see things from the perspective from Hime’s coworker – it gives some extra context to earlier scenes that were only shown from Hime’s point of view.

Yuri Is My Job! has been an enjoyable read so far, and I suspect that will continue to be the case for future volumes as well.

I enjoy writing, manga, anime and video games, so naturally here on my blog, you will find anime reviews, Nintendo news and other such things that I deem interesting.
View all posts by Rory →
This entry was posted in Manga and tagged Manga, Miman, Volume 2, Yuri Is My Job!. Bookmark the permalink.