The great outdoors beckons once again as I’ll be taking a look at the fifth volume of Afro’s Laid-Back Camp manga.
This volume contains chapters twenty-four through to twenty-eight. 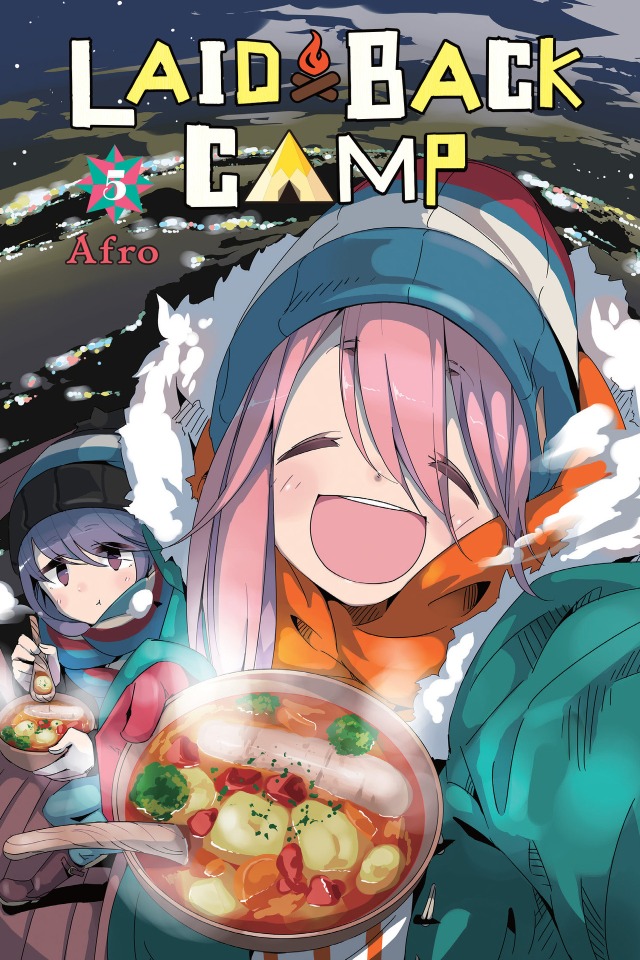 The New Year is right around the corner, and there’s a big question on all the girls’ minds: Where should each of them go to see the first sunrise of the year? Whether it’s by the ocean or in view of Mount Fuji, there’s no wrong answer – and it’s a great excuse for more camping! A freak snowstorm could derail Rin’s plans, but a little bad weather might just create the perfect opportunity for more relaxing, exploring, and (of course) eating!

This volume of Laid-Back Camp covers the end of a year, and the beginning of the next one. All the girls have various jobs that they have taken on in order to earn some cash, so they are hard at work at the beginning of this volume.
That is until almost all of them have a break during the first week of the new year. Rin takes the opportunity to embark on some solo camping, where she plans to see the first sunrise of the year.

Most of the focus in this volume is on Rin camping out by the ocean, taking in the sights, sounds and of course, local cuisine. She’s not the only one getting up early to see the first sunrise of the year, though: Aoi and Aki do the same.

Whilst Rin does get to embark on the quiet solitude of solo camping for a bit, it isn’t long before she is meeting up with Nadeshiko. They’re not camping together this time, but paying a visit to Nadeshiko’s grandmother, where Rin also meets one of Nadeshiko’s childhood friends.

Laid-Back Camp continues to be one of the most pleasant experiences a manga could give you. The various places that the girls visit and go camping in all look great, as too does the food the girls eat.
A pleasant tone with a healthy does of humour makes Laid-Back Camp a really fun read. Whilst there are funny moments during the main chapters, it is the Room Camp side stories where the humour is at its best. A fun way to cap off each volume of the manga.

I enjoy writing, manga, anime and video games, so naturally here on my blog, you will find anime reviews, Nintendo news and other such things that I deem interesting.
View all posts by Rory →
This entry was posted in Manga and tagged AFRO, Laid-Back Camp, Manga, Volume 5. Bookmark the permalink.