Episode fifteen of Star ☆ Twinkle PreCure sees the girls travelling to the Planet Zenny, where they participate in an auction to acquire the next Princess Star Colour Pen. With super rich celebrities participating, and word of a thief, getting the next Pen isn’t exactly going to easy.

The first thing the girls hear when they arrive on Planet Zenny is a song by space idol Mao. As luck would have it, they soon end up bumping into the idol herself. Puruns is a huge fan – Mao’s song saved him when he was about to give up during his search for PreCure. Mao is accompanying a super-celebrity alien named Mr. Drams, who is going to attend an auction. At Mao’s suggestion, Hikaru and the others are invited along as well. 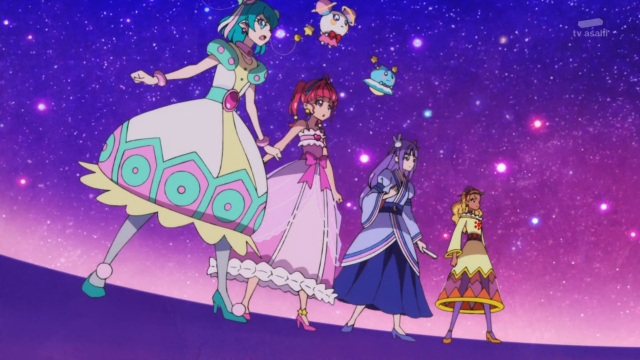 Wish I had a better shot of all four girls in their dresses, but the screenshot above will have to suffice. Anyways, Mao lends some fancy dresses to Hikaru and the others, and they enter the auction hall. The event begins with a performance by Mao, before the auction gets underway.
Super celebrity Mr. Drams buys all the lots. The final item in the auction is the Sagittarius Star Colour Pen. The amount everyone bids is vastly outside PreCure’s price range, but Madoka comes up with a plan to deal with that.

Madoka proposes a trade: a doughnut for the Star Colour Pen. She is able to convince the audience that one doughnut is worth a billion shien – the currency on the Planet Zenny – and ends up in a bid war. Ultimately, she is able to prevail – just as she runs out of doughnuts to bid with, too.
Madoka is awared the Star Colour Pen, but that’s when a thief strikes.

Hikaru and the others go outside to discover that it was Mao who had stolen the Pen – and the other items from the auction. Mao isn’t her true identity, though – she is actually a thief known as Blue Cat. 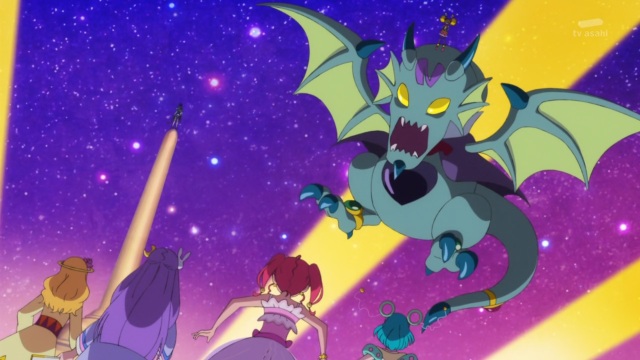 As if dealing with a thief isn’t enough, the situation becomes even more complicated when Ayewan shows up with a Notrigger in tow. Cue the transformation theme, and Cure Star, Cure Milky and Cure Soliel engage the Notrigger in battle. Cure Selene, however, has her eyes on the prize. 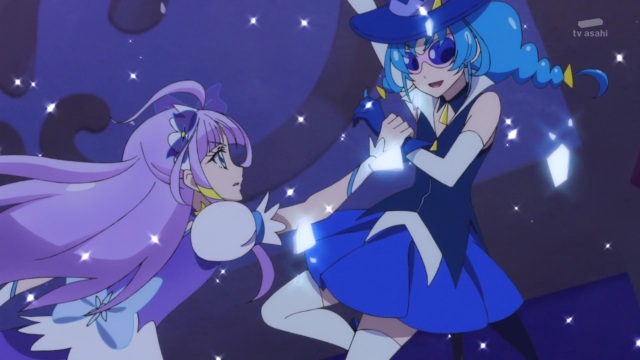 Whilst the others fight the Notirgger, Selene focuses on Blue Cat. Ayewan is not a big fan of being ignored whilst the two squabble, so she orders her Notrigger to attack them. Blue Cat throws the Sagittarius Star Colour Pen to Selene, who uses it to power up her attack.

Selene Arrow powered up by Sagittarius

Selene’s attack gives PreCure the opportunity to deliver their finishing move. Ayewan retreats, and Blue Cat makes a getaway shortly afterwards as well. Before PreCure do anything else, they have to restore Star Princess’s power.

With the power of Sagittarius restored, PreCure are now halfway to collecting all twelve Princess Star Colour Pens.
On their trip home, Hikaru wonders how Blue Cat knew about them being PreCure, whilst Puruns just binge eats.

This was a really fun episode of Star ☆ Twinkle PreCure. I’ve been waiting for the girl in the top hat to make her debut, particularly with her appearing in the opening credits. She’s only had a relatively brief appearance, but I can happily say that I like Blue Cat a lot. My money is on her becoming the next member of Pretty Cure.
I’m going to guess that Blue Cat is from the same planet as Lala – Samaan. She has pointy ears, and is aware of PreCure. Blue Cat doesn’t have any obvious antenna like Lala does, but anything could be hiding under that top hat.

Blue Cat’s appearance was great, but Madoka definitely deserves some kudos as well. She was able to win the bid for that Star Colour Pen thanks to some quick thinking. This episode also opened the door for a potential rivalry between Cure Selene and Blue Cat. I don’t know if future episodes will follow up on that or not, but it’s fun to speculate. The girls all looked great in their dresses, too.

So, overall, a really great episode. I very much look forward to more inevitable Blue Cat encounters. Before that, though, Madoka has an archery competition in the next episode.