The fourth episode of Aikatsu Friends! Shining Jewel presents us with a more mature Aine, particularly after Mirai asks her a particular favour.

Mirai wants her protege – one Wakaba Harukaze – to be Aine’s one day shadow. Aine is happy to go along with that, and continues with her day as normal afterwards. When she meets with Mio, Honey Cat and Reflect Moon, they notice that there is something on top of Aine’s head: an unrefined jewel. Aine just thought her head felt slightly heavier due to being tired, so discovering that she has been chosen by a jewel comes as quite a shock. 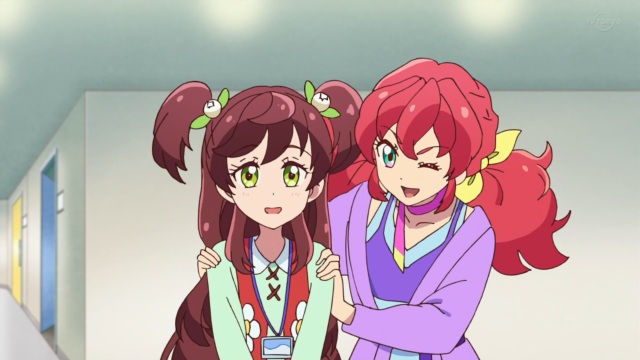 Later on, Aine and Mio go to meet Mirai. Mirai introduces Wakaba Harukaze to them, and also mentions that Wakaba loves Aine. Wakaba decided she wanted to become an idol after reading Pure Palette Legends, and she started on that path by passing Mirai’s audition. Mirai also seems to detect a hint of jealousy from Mio when Aine and Wakaba hit it off immediately.

Aine decides to be more mature for Wakaba’s sake

With Wakaba now accompanying Pure Palette for the day, Aine decides that she needs to be more mature; naturally this leads to her acting in a rather odd manner.

Pure Palette finish carrying out their duties for the day, and Wakaba parts ways with them. As Aine and Mio walk home, Aine discovers that her unrefined jewel has just disappeared.

With her jewel gone, Aine decides to go and see Hibiki. Aine is convinced that the jewel got mad at her due to her different behaviour, but Hibiki isn’t really able to provide any answers. She may have a jewel of her own, but that doesn’t particularly mean she knows how they work.
Mirai soon shows up, and she ends up arm wrestling Hibiki. Seeing Mirai and Hibiki’s heated rivalry, something inside Aine clears up. She asks Mirai if she can borrow Wakaba for a day again, as she wants to show off her real Aikatsu this time. 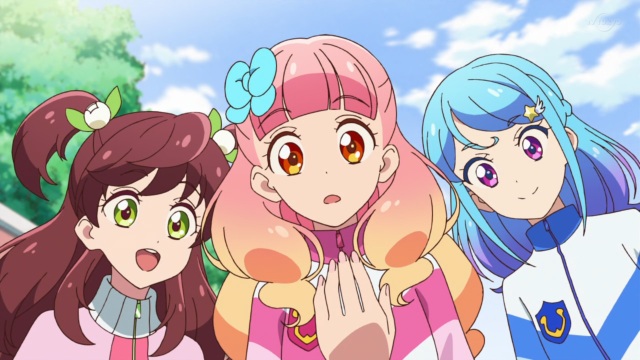 With Aine being her normal self, it’s not long before her unrefined jewel appears once again. This time, though, it transforms into a diamond. The opportunity to use the diamond soon arrives when Aine is a guest on Hibiki’s show. 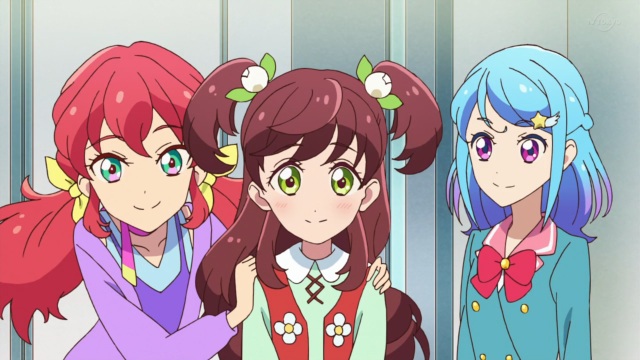 Mirai wanted Wakaba to see the fun of Aikatsu

After the performance, Mirai tells Aine the reason she had Wakaba shadow her. She simply wanted the lesson-happy Wakaba to see the real fun of Aikatsu. Aine was able to deliver just that, in the end.

Four episodes in, and I feel like the second season of Aikatsu Friends! has a very strong possibility of being better than the first – though perhaps that is because we already have a large chunk of the cast established, so it has not taken as long to get into its flow.
Though saying that, the new characters – Hibiki, Alicia and Wakaba – have made some very strong first impressions.

I’m really enjoying the rivalry between Mirai and Hibiki; I hope that every time they are on screen together, they engage in some kind of competition.
Wakaba is cute, and I’m pretty curious to see what the future has in store for her. Will she be a solo idol, or will she become Friends with a new character later on?

Aine was the stand out character of this episode, though. I’ll be honest here, I am not opposed to a more mature Aine. She may have been behaving out of character, but I think she actually pulled it off quite well.

Next episode is one that focuses on Honey Cat and Reflect Moon. Though it might be more accurate to say Reflect Cat and Honey Moon…
Either way, it is one that I am looking forward to quite a lot.