Aikatsu Friends! Shining Jewel Episode 3: All About the Challenge

In the third episode of Aikatsu Friends! Shining Jewel, Hibiki continues to show us that she is a great character. She decides that a chat show with Pure Palette, Honey Cat and Reflect Moon isn’t quite good enough, so she plans something a little more exciting. 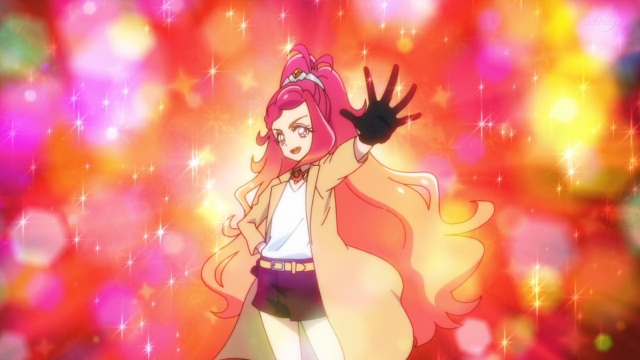 This episode begins with Hibiki messaging Alicia, and Alicia continuing to ignore Hibiki’s pleas to reform their Friends unit. Shortly afterwards, Hibiki has a meeting about an upcoming show she will be doing, which will feature Pure Palette, Honey Cat and Reflect Moon. Hibiki has her own plan about what the show should be, though.

First up, Hibiki meets with Honey Cat. She tells them to play rock paper scissors, which Maika wins. As such, Maika is chosen to be the second-ever spacekatsu idol. Ema fully supports her in this, but when Hibiki reveals that she’ll need to put her Friends activities aside for five years, Maika turns down the offer. If she’s going into space, she is doing it with Ema. 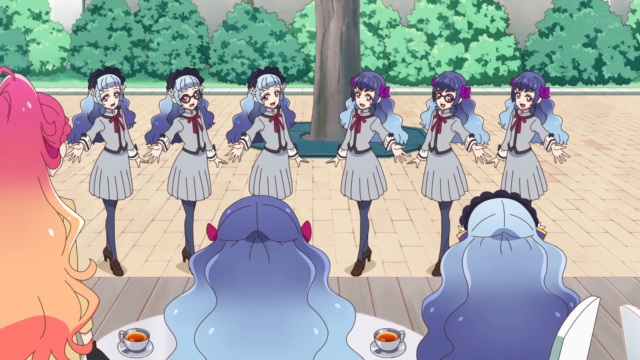 Next, Hibiki meets with Reflect Moon. As they talk, long lost Shirayuri siblings just start appearing one after the other, asking Sakuya and Kaguya to form Friends with them. The twins are taken aback at first, but when it comes down to it the ones they are most dedicated to are each other; Sakuya and Kaguya turn down the offers from their supposed siblings. 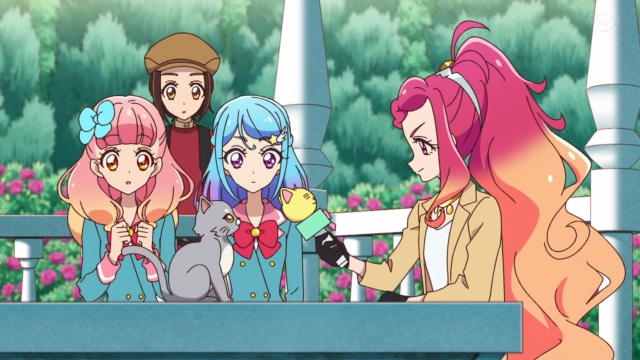 Good to see that Habarazzi wasn’t just a one-note character from the first season – in fact, she is the one writing Pure Palette Legends

Finally, Hibiki talks to Pure Palette. She brings with her a microphone that can translate animal speak, and fortunately there is a cat present. After translating the cat’s meow, she decides that they should go and talk to Penne, at Aine’s place.

Aine and Mio when they discover that they’ve been pranked

Penne supposedly proposes to Mio, and says that they will live in Antarctica. When it comes down to it, though, Mio refuses to disband Pure Palette above all else. Aine also realises that something is strange, because she knows Penne would never say anything like that.
Hibiki reveals that they are starring in her prank show. Honey Cat and Reflect Moon were victims as well, but they are happy to sign off on it.

Aine and Mio can communicate without words

After all that, Hibiki talks to Pure Palette, Honey Cat and Reflect Moon about their bonds as Friends, and how they are able to communicate without talking. In the end, what Hibiki wanted out of this was some way to better communicate with Alicia. 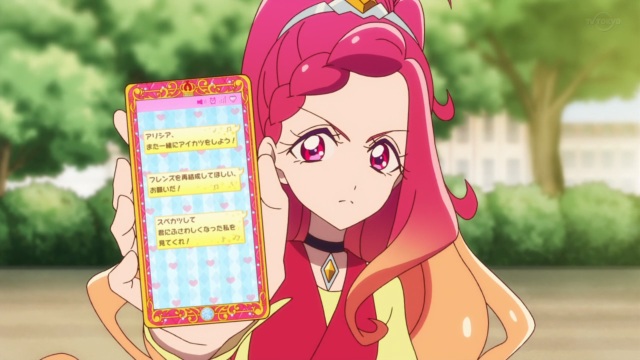 When Hibiki is left alone with Pure Palette, she tells them that she felt it was fate when she and Alicia first became friends. However, they got so caught up in work that Hibiki never really felt like she got the chance to know Alicia outside of that.
Aine and Mio tell her that there is no time like the present to get to know Alicia, and suggest asking what she likes. Hibiki sends a message asking just that, and Alicia replies – she likes sherbet and skiing, by the way.
Aine and Mio also figure out that the reason Alicia didn’t reply to any previous message was because it would just be one rejection after the other – Alicia woudn’t reply until she felt she was ready to form friends.

Look how happy Hibiki is to talk to Alicia

Pure Palette have a show, which they invite Hibiki to attend. She does so, also messaging Alicia to tell her about. Afterwards, Hibiki tries calling Alicia, and to her surprise, she answers this time around. Hibiki simply wants to get to know more about Alicia.

So far in this second season of Aikatsu Friends! I would have to pick this episode out as my favourite one yet. Admittedly we are only three episodes in, but this was a really good one. It’s got me feeling pretty positive about the rest of this season as well.

Hibiki tested the bonds of Pure Palette, Honey Cat and Reflect Moon with her prank show, but it was all an elaborate ruse to experience her bonds for herself. She intends to use that to reconnect with Alicia, and I’m totally cheering for her to do so the whole way.
Pure Palette, Honey Cat and Reflect Moon all had some great moments in this episode.
When it comes down to it, everything about this episode was great. Definitely one of the best that Aikatsu Friends! has to offer.
Wait, there was one thing that was missing: Coco was nowhere to be seen in the Aikatsu Navi Coco segment. I hope she gets at least one more episode in this season.

Next time, there’s something on top of Aine’s head.