Aikatsu Friends! is a fifty episode anime series based on an arcade collectible card game from Bandai’s Data Cardass line of machines. The director of the anime is Tatsuya Igarashi, and the writer is Yuuko Kakihara. The studio that produced the show is BN Pictures.
I’ll preface this review by saying that this is my first experience of the Aikatsu franchise, so I shall be judging it based on what it offered, rather than comparing it to what has come before.
Aikatsu Friends! started airing during the spring 2018 season of anime, all the way up to the end of the winter 2019 season of anime.

Aikatsu Friends! focuses on Aine Yuuki, a student at the Star Harmony Academy. She meets Mio Minato, and the pair form an idol unit – or Friends, as the series puts it – in order to try and achieve the prestigious title of Diamond Friends.
When it comes down to it, Aikatsu Friends! is an idol series. There are four main Friends units that the show focuses on.

First are Pure Palette. Aine and Mio are the two who make up this Friends unit. Aine wants to make a million friends, and as such has a fairly outgoing personality. She can never pass by someone in need, so she is always helping others.
Mio, on the other hand, is more reserved. She doesn’t particularly have many friends, but a large part of her character development involves her breaking out of her shell. 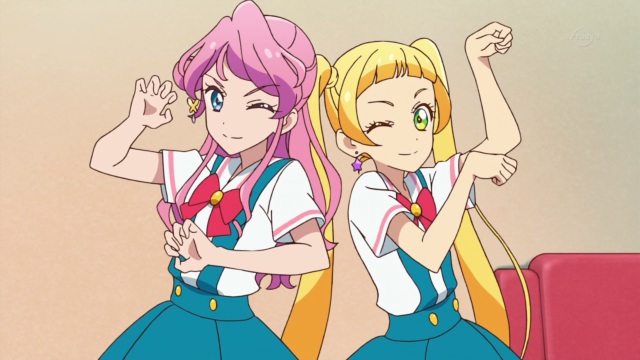 Next, we have Honey Cat. Maika Chouno and Ema Hinata make up this Friends unit. For them, their whole dynamic is pretty much “opposites attract”. Their dynamic does lead to them clashing here and there, but that only serves to strengthen their bond. 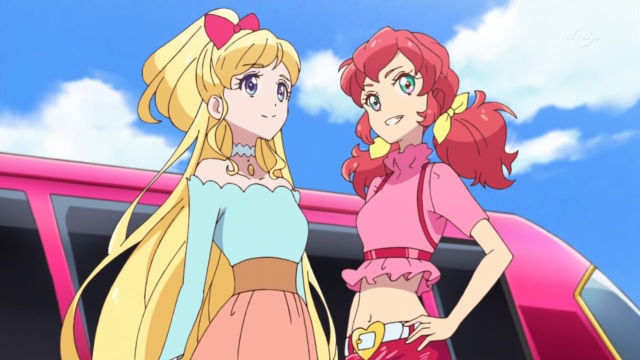 Idol shows often have veteran idols involved, and Aikatsu Friends! is no exception. The veteran Friends unit, and holder of the Diamond Friends title, is Love Me Tear. Karen Kamishiro and Mirai Asuka. Karen is one of those ridiculously rich types, but also gentle and caring. Mirai is proud in her eccentricity, as well as being bubbly and outgoing.
Whilst they are friendly enough, the pair can be surprisingly harsh should the need arise. 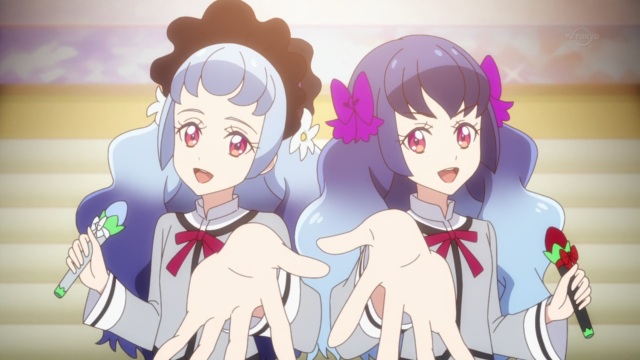 The fourth Friends unit is Reflect Moon, made up of the twins Sakuya and Kaguya Shirayuri. Gothic lolita idols are a very common trope in Aikatsu, and this season gives us a pair of them. Sakuya is a sweet and gentle character, whereas Kaguya tends to come off as more blunt.

The story of Aikatsu Friends! focuses on each of the Friends units, and the various trials and tribulations that they have to overcome on the path to becoming Diamond Friends. Or, in Love Me Tear’s case, just being Diamond Friends.
There’s the formation of the Friends units towards the beginning of the season, and there are various competitions where they all compete with each other.

Much like PreCure has its monster of the week fights, Aikatsu Friends! has its performance of the week. Whichever Friends unit (or sometimes solo character) is the focus of the episode will perform, prefaced with Aikatsu‘s version of a transformation sequence.
Part of being an idol also involves collecting various dresses – or Coords – which take the form of cards. Changing into said Coords is a whole transformation sequence in and of itself. The music that plays during said sequences is particularly good, too.
From the dressing room sequences to the performances, the animation changes to CGI. It all looks pretty good. 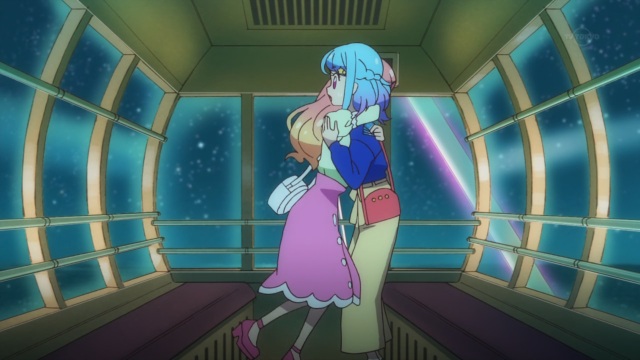 One of the main reasons I decided to start watching Aikatsu Friends! is very similar to one particular reason that I watch PreCure: yuri.
Whilst its couples aren’t as prominent as say Emiru and Ruru from Hugtto! PreCure, there are definitely some very noteworthy moments between each of the four main Friends units.
Pure Palette is formed with Mio giving Aine a dramatic confession whilst on a Ferris wheel. That’s just the beginning for Pure Palette, though.

Later on into the season, Aine and Mio get an even more notable series of events that continues to add even more fuel for their ship. There’s some pretty drastic decisions involved for Pure Palette, but the pay off is certainly worth it. If you’re wondering how subtle that whole thing is, certain scenes focusing specifically on Aine and Mio are accompanied by church bells. 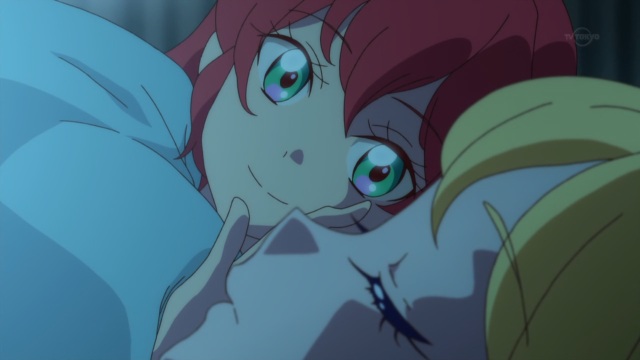 The other duo who stand out when it comes to yuri is Love Me Tear. Their song “Believe It” pretty much invokes it, and then you have scenes like the one pictured above. It seems that a prerequisite for forming a Friends unit is to have a romantic two-girl friendship – and yes, this can apply for both Honey Cat and Reflect Moon as well.
They both have their moments, but it is Pure Palette and Love Me Tear who particularly stand out in that regard.

Aikatsu Friends! is a decently fun anime, but there are a couple of things that do disappoint. First and foremost is Coco not getting any performances. Coco is an AI assistant, much like Alexa or Siri. There are a couple of episodes where it seems like she will get a performance, but that turns out not to be the case.
Another thing is that it feels like the show hits its climax too early. The Diamond Friends Cup is the last major competition in this season, and it comes at episode 41 of the show – in a 50 episode anime.
After the Diamond Friends Cup has concluded, it feels like Aikatsu Friends! just starts spinning its wheels. A lot of the events in the last few episodes just feel totally inconsequential, though it does get a bit better about it as the last episode approaches.

With 50 episodes, there will naturally be some that are better than others. For the most part, Aikatsu Friends! manages to maintain a fairly consistent quality throughout. It is consistently enjoyable, if not spectacular.

What is spectacular, though, is the soundtrack. All four main Friends units get some truly excellent songs, with Love Me Tear’s “Believe It” and “Pride”, as well as Reflect Moon’s “Have a Dream” being songs that particularly stood out for me. Each of the main characters have their own solo songs, too, and the quality doesn’t decline even if they are away from their partners.

Score: 7/10
Aikatsu Friends! is an enjoyable watch, with some truly excellent music. It does have a couple of disappointing decisions here and there, but its good points do make up for them a bit.
A second season, Aikatsu Friends!: Shining Jewel, will follow this one. It is set two years after the first season, and introduces a few new characters.

I enjoy writing, manga, anime and video games, so naturally here on my blog, you will find anime reviews, Nintendo news and other such things that I deem interesting.
View all posts by Rory →
This entry was posted in Rory's Reviews and tagged Aikatsu Friends!, Autumn 2018 Anime, Idol, Music, Rory's Reviews, Spring 2018 Anime, Summer 2018 Anime, Winter 2019 Anime. Bookmark the permalink.