Star ☆ Twinkle PreCure‘s ninth episode is one that focuses on Madoka. She strives to be perfect in all things, but she does have a lot to deal with. 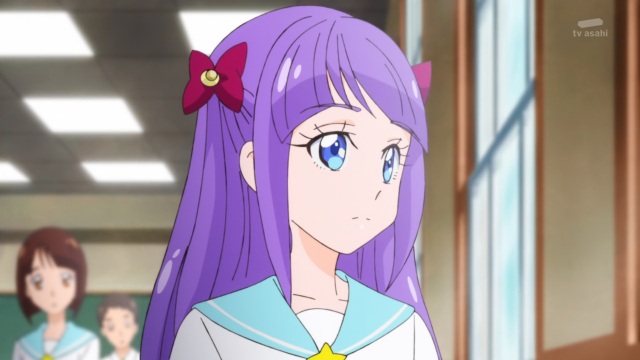 Madoka stares off into the distance

After PreCure’s little adventure into space last time, Lala’s rocket safely touches down on Earth. Hikaru is surprised to learn that Madoka has never tried Star Doughnuts, much less ever been to the shopping district.
Madoka wants to be perfect in all things, whether that’s her studies or archery, or even being PreCure. She has to keep that last one a secret from her father, though. Perhaps she is feeling pressure from that, as she struggles to maintain her perfect self during school.

Madoka’s archery is off, as well

Madoka practices her archery when she can, and finds that her arrow doesn’t hit the centre of the target. Her father says that is not good enough. He also mentions multiple sightings of UFOs, and tells Madoka she will be transported by car to ensure her safety.

Hikaru grabs Madoka to take her to the shopping district

After school, Madoka always goes straight home. Hikaru decides to get involved, and grabs Madoka before she can get into the car waiting for her. Hikaru takes Madoka to the shopping district, where they find Lala waiting for them.

I should probably also mention that Sakurako Himenojo has been keeping a close eye on Madoka as well. She mistakenly believes that Hikaru is trying to gain favour with Madoka in order to become the next student council president; the very same position that Sakurako wants for herself.

As Madoka enjoys what the shopping district has to offer with Hikaru and Lala, the three of them end up bumping into Elena. Elena has somewhere in mind for them to go, so she takes them there. Meanwhile, Ayewan and Bakenyan watch over the shopping district, and spot their next target. 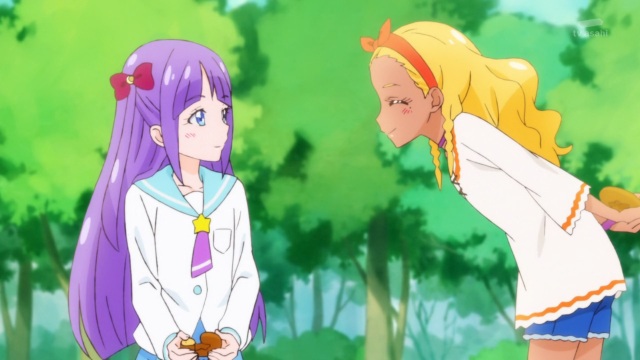 Elena tells Madoka that she can rely on her friends

Elena takes the other girls, and her own younger siblings, to a picturesque lake that she enjoys visiting. Hikaru, Lala, Fuwa and Puruns eat their doughnuts, whilst Madoka and Elena talk about how Hikaru is looking out for everyone. Elena tells Madoka that she can rely on everyone else too; they are friends, after all.

Madoka’s Star Colour Pendant gives off a reaction, and it isn’t long before the girls are confronted with a Notrigger. Elena sends her siblings home, and then all four confront the enemy. Naturally, that means transformation time.

During the fight, Cure Star distracts the Notrigger, which allows Cure Selene to line up a shot and shoot the Dark Pen right out of Ayewan’s hand. Cure Soleil catches the Dark Pen, and throws it over to Cure Selene. Once in Selene’s possession, the Dark Pen reveals itself to be the Capricorn Star Colour Pen.

Using the power of the Capricorn Pen, Cure Selene is able to defeat the Notrigger. Ayewan and Bakenyan make a hasty retreat after that. 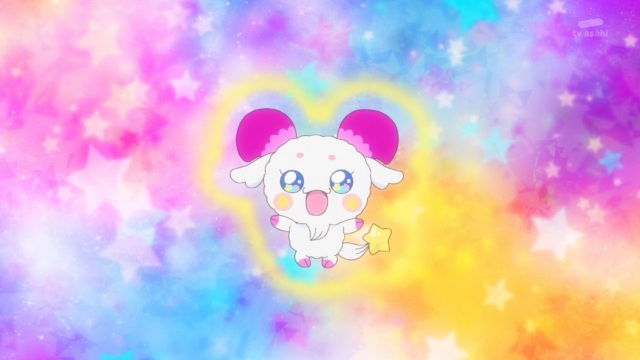 After the battle, the light of the Capricorn constellation is restored, and the Princess of Capricorn returns to the Star Palace. That just leaves eight more.

This episode ends with all the girls telling Madoka to refer to them on a first name basis, as she had been referring them by family name before – besides Lala, who has yet to reveal (or be given) a family name.

This episode could be the very start of something important between Elena and Madoka. Though saying that, Madoka also got some meaningful interactions with Hikaru in this episode as well. Lala seemed to get left out a little compared to those two, but it’s not like there won’t be plenty more opportunities for Lala and Madoka to interact with each other.

This was an enjoyable episode. Whilst Madoka may strive for perfection, she makes mistakes just like anybody else. More importantly, she is growing closer to the other girls. I look forward to seeing how their relationships develop.

Next time, a new planet for PreCure to explore.