Hugtto PreCure♡Futari wa PreCure: All Stars Memories is the twenty-fifth overall Pretty Cure film, as well as the eleventh entry of the All Stars series of PreCure films. It is a celebration of the fifteenth anniversary of the Pretty Cure franchise, and features the Hugtto! PreCure team joining forces with the original duo of Cure Black and Cure White. Oh, and everyone else is there, too.

The plot for Hugtto! PreCure♡Futari wa PreCure: All Stars Memories is a relatively simple one. A being called Miden has been stealing the memories of all the PreCure, turning them into little kids. With only the Hugtto! PreCure team and Cure Black and Cure White managing to escape from Miden, they team up in order to retrieve the stolen memories and turn all the other PreCure back to normal. 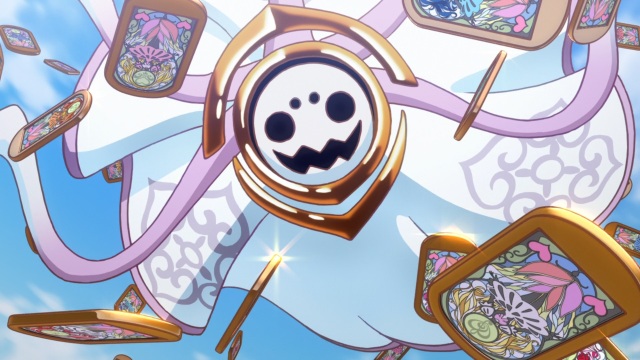 The antagonist of the film, Miden

First up, I’ll focus on the antagonist of the film, Miden. Hana describes him as a teru teru bozu, and I can’t think of a more fitting description. However, Miden won’t be warding off  the rain. Instead, he wants to steal the memories of all the PreCure, and has succeeded in stealing the majority of them right at the start of the film.
The stolen memories allow him to use PreCure’s powers, so this is probably the closest we’ll ever get to seeing PreCure fight each other.
As far as film antagonists go, Miden’s fairly all right.

For these PreCure crossover films, the main focus is generally seeing all the different generations of PreCure join forces to overcome their foes. That generally doesn’t leave time for much else, but All Stars Memories manages to squeeze in a real treat for yuri fans.
Considering how they were in the Hugtto! PreCure TV series, you might expect Emiru and Ruru to to be the ones who provide that treat. You’d be wrong, though: it is actually Nagisa and Honoka.

One of the best scenes in the film

Around the twenty-five minute mark, we get an amazing scene where Nagisa declares that Honoka is the most important world to her, and she loves her. During Futari wa Pretty Cure and Futari wa Pretty Cure Max Heart, the love between Nagisa and Honoka was mostly subtext. Here, Nagisa is shouting it out loud for the whole world to hear, and Honoka is reciprocating those feelings. 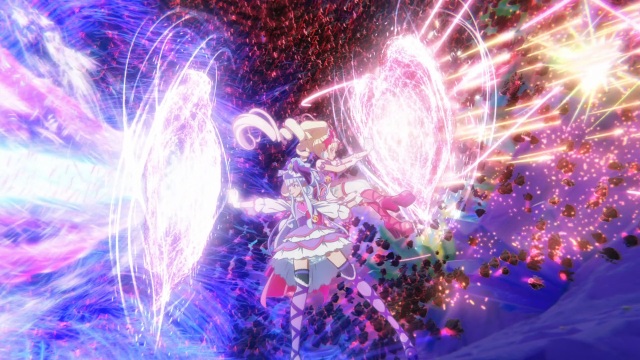 I suppose now would also be a very good time to mention that Hugtto! PreCure♡Futari wa Pretty Cure: All Stars Memories is a record breaking film. At the time of writing, it holds the records for most magical warriors in one anime film – a total of fifty-five.
There are a couple of things it had to do to achieve that: have all the characters speak, and use their powers.
Yep, so unlike episode 37 of Hugtto! PreCure, all the Cures that appear here get at least one line of dialogue, and they all get to use their abilities during the film’s climax.

Whilst All Stars Memories does have that over Hugtto! PreCure episode 37, it doesn’t group the Cures by theme. Instead, they solely stick with their own teams. Either way, that final bit of action in the film is a very satisfying watch.
The PreCure going all out against their foes accompanied by an instrumental medley of their respective opening themes is a lot of fun to see.
Characters like Cure Echo, Regina, and Yui Nanase actually get to appear in Hugtto! PreCure as well, but are absent for All Stars Memories. That’s particularly odd for Cure Echo, as she debuted in an All Stars film.

When it comes down to it, though, both episode 37 of Hugtto! PreCure and All Stars Memories are brilliant celebrations of fifteen years of Pretty Cure. It would have been pretty simple to rehash the plot of one into the other, but Toei didn’t do that. Instead, they gave us two different celebrations of the franchise’s history and both are spectacular.

If you were to ask me which I prefer, I’d have a tough time answering. Hugtto! PreCure episode 37 and All Stars Memories are both brilliant. The music and Nagisa and Honoka’s scene might just give All Stars Memories the edge, though.

Hugtto! PreCure is a brilliant celebration of fifteen years of Pretty Cure, and the same can easily be said of All Stars Memories. Definitely a must watch, especially if you enjoyed Hugtto! PreCure.