Here’s something I probably should have got around to before now: sharing my thoughts on the fourth and final volume of the Puella Magi Oriko Magica: Sadness Prayer manga. Chapters twenty through to the final chapter (24) are contained within this volume. 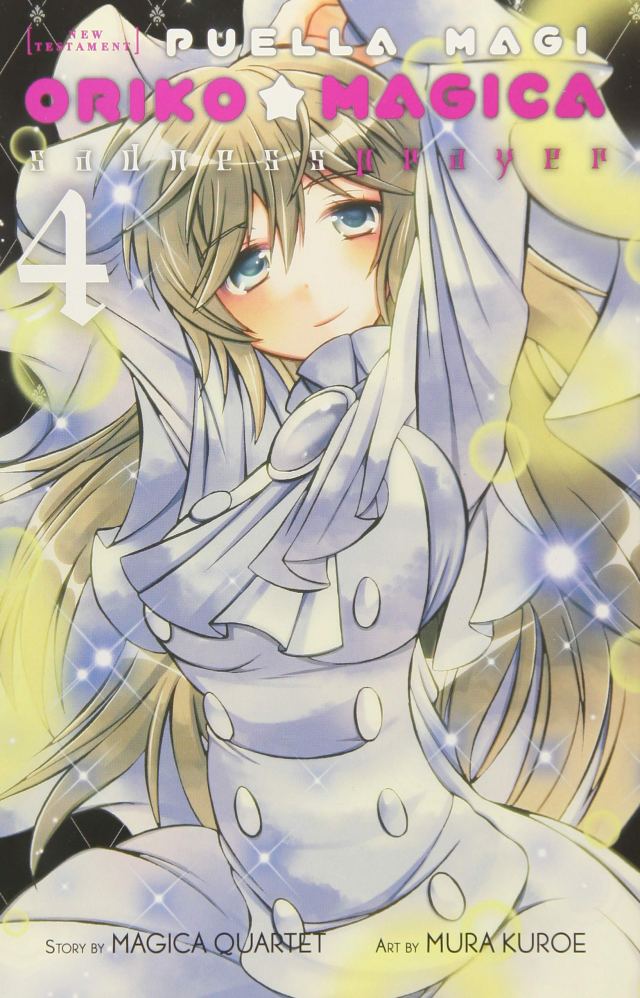 Since her transformation into a magical girl, Kirika has served as Oriko’s muscle, sparing her the trouble of battling witches – and other magical girls – herself. Little did Oriko know that Kirika was also protecting her from a terrible secret, one that will shake Oriko to her core. As past and present sins press against her, will Oriko’s resolve stand firm?

As you might expect from a final volume of manga, a few secrets come to light here. Kirika regains memories of the wish she made to become a magical girl, and Oriko ends up discovering a few things about her family.
Whilst these revelations do affect Oriko, she doesn’t stray from her ultimate goal. She does gain a new perspective, though.

This leads up to a final confrontation: Homura, Mami, Kyouko and Yuma against Oriko and Kirika. The battle isn’t as simple as magical girls fighting though; Kirika has managed to put a twist on a magical girl’s fate. Kyouko and the others have a difficult fight, which could be made much easier if only they worked together…

This volume of Puella Magi Oriko Magica: Sadness Prayer is a decent conclusion for this spin-off. It does have the same general tone as Puella Magi and the other spin-offs, so don’t go expecting sunshine and butterflies in the end. Though saying that, it may have one of the more hopeful endings, due to it incorporating a certain major event from Puella Magi Madoka Magica.

I enjoy writing, manga, anime and video games, so naturally here on my blog, you will find anime reviews, Nintendo news and other such things that I deem interesting.
View all posts by Rory →
This entry was posted in Manga and tagged Magica Quartet, magical girl, Manga, Mura Kuroe, Puella Magi Oriko Magica: Sadness Prayer, Volume 4. Bookmark the permalink.