In episode eight of ENDRO!, Rona wants to see Yusha be more heroic. As such, she arranges a little something with the help of Mao to get what she desires. 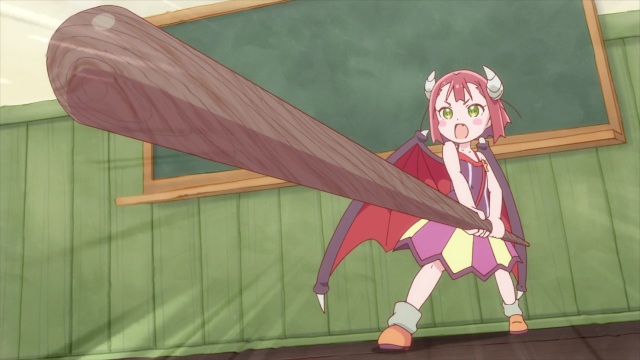 Mao teaches her class the value of a staff

We start with the Adventurer’s School, where Mao is teaching lessons as usual. Princess Rona is also in attendance, but being royalty doesn’t get her any special treatment. As far as Mao is concerned, Rona is a student, just like the rest of her class. 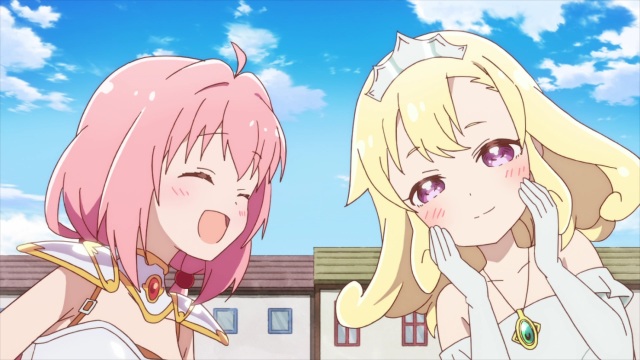 Yusha and Rona shopping together

Once classes have ended, the Hero’s Party spend some time together, accompanied by Princess Rona. Fai surprises the others by sharing food with Rona, and they go shopping afterwards.
Returning home as night falls, Rona realises that something is missing. She wants to see her Hero doing something heroic.

Rona seems to be well versed in the art of persuasion

Rona stops by Mao’s place, where she makes a very compelling offer to have Mao help her out. Mao resists at first, but is soon taken in by Rona’s incredibly generous offer. As such, she sets things up so that Rona gets ‘kidnapped’ by the ‘Demon Lord’. Mao brings the news directly to Yusha.

The Hero’s Party ready to save Princess Rona

Yusha and her allies travel to the Demon King’s castle, determined to save Rona. Unbeknownst to them, the castle is actually something that Rona has had prepared for quite a while.
Either way, they press on through the castle, having to overcome obstacle after obstacle. 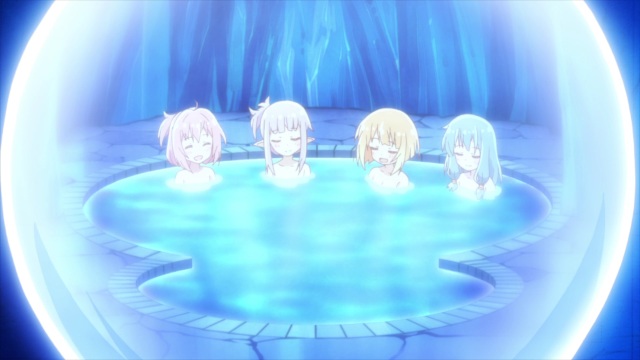 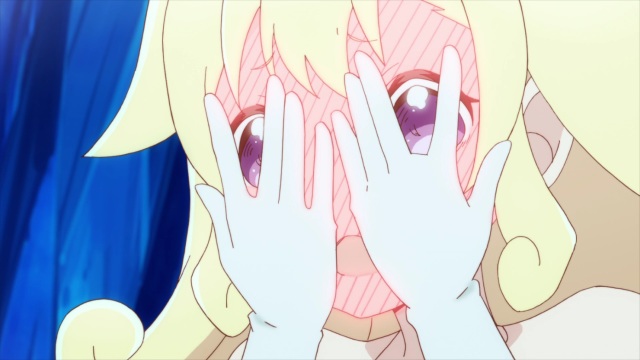 Rona and an exasperated Mao watch as the Hero’s Party steadily advance through the castle, though Rona isn’t quite satisfied. She knows that the Hero’s Party have not actually been in danger so far, but Rona wants them to face similar trials to those spoken of in legends. However, the idea of Rona putting Yusha and the others into danger seems to confuse her somewhat.

Yusha fights one of the “Demon Lord’s Four Generals”

The next trial that the Hero’s Party has to overcome are the Demon Lord’s Four Generals. They are actually Rona’s personal bodyguards in costumes, but it seems that they may even be stronger than the actual Generals. However, the Hero’s Party resolve to save Rona impresses them, and the girls are allowed to pass.

With the Hero’s Party passing the Generals, Mao says that Rona should just stop the whole thing now. She goes on to ask what Rona thought when she saw Yusha and the others fighting. She says that she felt a prickling in her chest, though Rona can’t quite figure out why.
Satisfied with her answer, Mao decides that she will go through with the act until the end. She uses a transformation Cartado and awaits the Hero’s Party.

Rona bring a halt to the battle

The Demon Lord traps Mei, Seira and Fai in a barrier, leaving Yusha to fight alone. As they clash, the Demon Lord asks why Yusha wants to rescue the princess. Yusha’s answer is simple: Princess Rona is a precious friend.
This is when realisation hits Rona, and she brings the fight to a stop. She admits the whole thing was a set up, but has now realised that she was imposing her own vision of the Hero onto Yusha rather than seeing her for her actual self.
Mao reveals she was playing the role of Demon Lord, which surprises the Hero’s Party. However, things end on a happy note, as Yusha swears that she will save Rona if she ever ends up actually kidnapped.

The episode ends with Rona having made lunch for the Hero’s Party as an apology for what happened. They accept her sandwiches, and Rona starts referring to Yulia as ‘Yusha’.

Another warm and fuzzy episode from ENDRO!, though for a different reason from the one where Mao got ill. Princess Rona continues to come to terms with her feelings for Yusha, and even recognises that they may not spring from her admiration of the Hero.
Earlier episodes suggested she was aware of Mao’s situation, but that doesn’t seem to be the case here. Either she’s playing dumb, or Rona just coincidentally dropped those hints before.

ENDRO! has consistently been delivering enjoyable episodes, and that trend continues with this one. It has just been an fantastic adventure so far, with plenty of charm and heartwarming moments.