In the forty-fifth episode of Aikatsu Friends!, Pure Palette tries to figure out a way to make their shows more accessible for a younger audience, whilst Aine makes a new friend.

With Aine and Mio having become Diamond Friends, many new possibilities have opened up before them. They will be able to do things that they could have never done before, though Tamaki does say that they don’t need to be too ambitious. 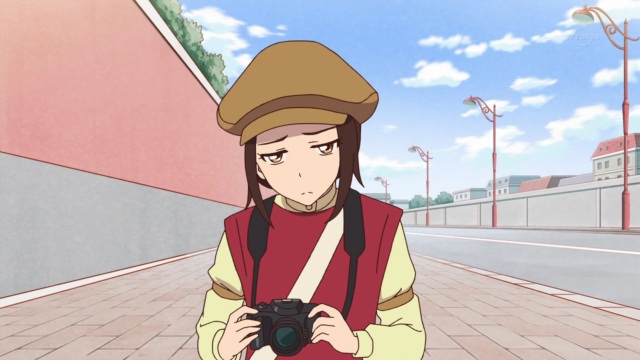 This girl has trouble keeping up with Aine and Mio

Tamaki also warns them that Pure Palette’s newfound popularity means attracting a lot more attention from the paparazzi and the like. Wouldn’t you know it, at that moment a girl has her camera trained on the pair. When Aine and Mio go for their run, the photographer is unable to keep up with them.

With Aine and Mio discussing their show and the lack of children in the audience, the photographer tries to get some snaps. Things don’t quite work out for her due to a certain penguin. When Aine and Mio come out to investigate, she tries to make a run for it and ends up slipping and falling. 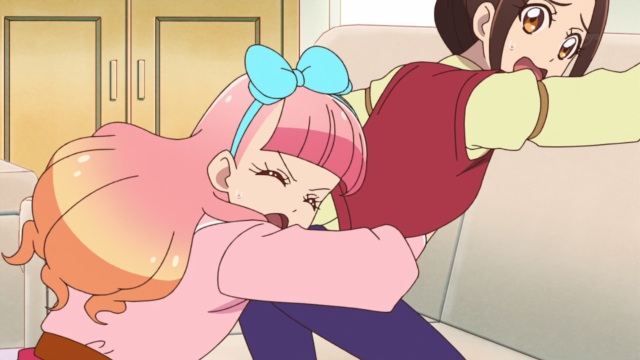 Aine is going to become friends with everyone, one way or another

Aine and Mio take the photographer inside. She tries to make a break for it when she comes to, but Aine stops that. She then properly introduces herself as Mamiko Habara, a reporter from Weekly Runrun. She also tells Aine and Mio a bit about her background, too.

After a session of playing with Aine’s little brother and his friends, Mamiko helps Pure Palette to realise just why they weren’t getting any kids at their shows. Since Pure Palette want to reach out to everyone – Aine’s new goal being to befriend everyone in the world – Aine does something about it with her upcoming solo show.

Aine puts on a show for children only

Aine’s solo show only allows children in the audience, giving them a chance to see at least half of Pure Palette in action. It’s a successful show. Tamaki is also quite impressed that Aine was able to make friends with Mamiko.

I can’t exactly quite put my finger on it, but I haven’t particularly found the last couple of Aikatsu Friends! the most compelling things. This one was all right, but it didn’t feel like much was gained out of it. I think they missed an opportunity to make Mamiko Pure Palette’s official photographer. At this point, I don’t even know if we will be seeing her again outside of this episode. Hopefully we do, so it gives this episode some meaning at least.
Like I said with the previous episode, Aikatsu Friends! is just spinning its wheels at this point.

Hopefully things will pick up with the next episode, when Reflect Moon will be in the spotlight once more.

I enjoy writing, manga, anime and video games, so naturally here on my blog, you will find anime reviews, Nintendo news and other such things that I deem interesting.
View all posts by Rory →
This entry was posted in Episodic and tagged Aikatsu Friends!, Aine Yuuki, Episode 45, Episodic, Idol, Mio Minato, Music, Pure Palette, Winter 2019 Anime. Bookmark the permalink.