Preparations for the double culture festival are in full swing in the eighth episode of BanG Dream! 2nd Season. Meanwhile, Tae has something she wants to tell the other members of Poppin’ Party.

Tae tells PoPiPa that she wants to play in another band

After reuniting with Lay in the previous episode and being asked to join her band, Tae reaches a decision. She tells PoPiPa that she wants to play with another band, which understandably worries them. However, they are reassured to learn that Tae will just be support for Lay’s band.

With PoPiPa’s support, Tae goes to meet the rest of Lay’s band. She meets CHU2, Pareo and Masking, though Lay – or ‘Layer’ as they call her – is absent due to work. 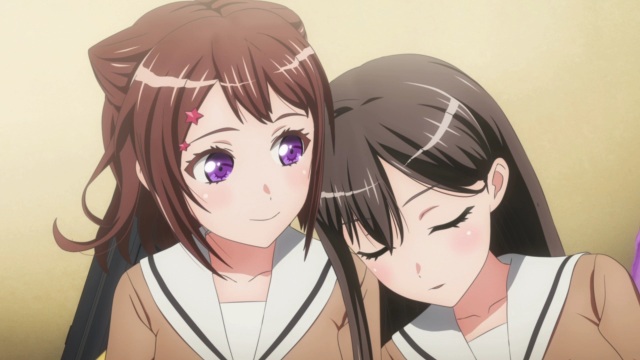 All the preparation for the double cultural festival is starting to exhaust everyone, and it seems that Saya is worried about PoPiPa falling out of step as they are not getting to spend much time together. Tae has practice with Lay’s band on top of that, and the exhaustion catches up to her.

The culture festival band don’t actually have any songwriters amongst their number, but they do discuss how their respective bands go about coming up with songs. Naturally, it falls down to somebody else in each case. Kasumi also happens to sit in on the meeting, hoping to pick up some tips for writing songs.

We get a nice little scene between Ako and Rinko where the former sees that the latter has become confident due to her role as student council president. Of course, Ako is happy for this and promises to support her – both online and off.

Rokka’s attempts at finding a band to play with are not going very well. Lisa decides to stop to talk to her, and the conversation soon turns to Roselia. When Lisa mentions that the culture festival is too fun for Yukina, Rokka is left wondering why someone would join a band if not for fun.

On the subject of Yukina, Kasumi happens to spot her whilst travelling between the two schools in the middle of preparing culture festival stuff. Kasumi asks if Roselia would like to perform at Poppin’ Party’s self-sponsored show. Yukina doesn’t agree, but she does say that she will consider it.

The culture festival band have an open rehearsal

Hina arranges for the culture festival band to have an open rehearsal, which seems to be a surprise even to the band members themselves. Still, they go ahead with it anyways. Aya stumbles over her introduction, but that is just what she is like. The most amusing thing to come from this performance has to be Ran’s face as the band plays.

Tae has to prove her worth to CHU2, so she has an audition with Lay’s band. Masking compliments her on her performance, which is something of a rarity according to Pareo. After that, CHU2 unveils the name of the band, as well as her plans for it.

The name of the band that CHU2 has put together: RAISE A SUILEN

CHU2 put RAISE A SUILEN together, as she wants them to end the era of the girl band. I don’t know how she intends to do that with another girl band, but whatever…
Anyways, she is committed to making them the best, and wouldn’t you know it: they have a show on the same date as the culture festival.
That means Tae is going to have to make a decision: Poppin’ Party or RAISE A SUILEN.

This felt like another busy episode, as the festival preparations are still going. Tae was the main star here, though. She wants to get better, and playing with RAISE A SUILEN may just provide the opportunity she needs – though she’s going to need to commit to one band or another.
If only there was some other guitarist looking for a band to join…

Nice to see some interaction between Ako and Rinko, too. I absolutely adore them as a couple, though the reason for that mostly stems from BanG Dream! Girls Band Party!. They’re definitely up there as one of my favourite BanG Dream! OTPs. Now if only the anime could show that off a little bit more…
Well, there’s still a few episode and a third season to go, so fingers crossed.

I’m almost certain that Roselia will be playing at PoPiPa’s self-sponsored show, even if Yukina is just “considering” it. Both bands pursue music, though one seems to take it a bit more seriously than the other.

I enjoyed this episode a lot. We had Tae’s drama, as well as the culture festival preparations. The culture festival’s band had a good performance with plenty of familiar faces supporting them, and then we had an introduction to RAISE A SUILEN. CHU2 seems to have quite ambitious goals with them.

1 Response to BanG Dream! 2nd Season Episode 8: Planning It Together, Step By Step