A tourist thanks Asuka after getting directions to a hotel

The episode starts with Asuka meeting a tourist who is looking for a specific hotel. Asuka points her in the right direction, and the tourist thanks her by kissing on her the cheek a few times. After that business is concluded, Asuka continues on her way to Sayako’s place for a study session with her friends.

Sayako tells Asuka that she should like herself more

With Kurumi and Nozomi letting the other two know that they will be late, Asuka and Sayako get started. They end up talking about their dreams: Sayako wants to become a scriptwriter. Asuka claims that she doesn’t have a dream, because she doesn’t really like herself. Sayako thinks otherwise, though.

Kurumi and Nozomi arrive, and the study session begins. Kurumi being Kurumi, she takes the opportunity to get close to Asuka – physically, that is. Nozomi soon gets bored, and suggests that they all go to the Tanabata festival together. Everyone agrees.

The girls in their kimono for the festival

I won’t go over every detail about the festival, but I will say that Nozomi quickly regretted mentioning that Asuka and Sayako looked like a couple when she was resting her head on Kurumi’s lap. They also bump into the M Squad, who are enjoying some time off whilst they can.
A little later on, the subject of magical girls comes up, and Asuka decides to go for a walk by herself.

Asuka bumps into the tourist again

Asuka happens to meet the tourist, and she tells her about the tradition of writing wishes on tanzaku. Asuka claims not to have a wish, but the tourist writes one down for her: Be Happy. When Asuka’s friends show up, the tourist happens to disappear to somewhere else. 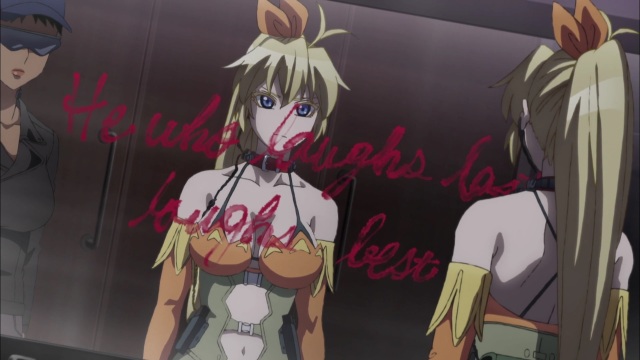 Just Cause comes across a very familiar message

Focus switches to Mia – or rather, Just Cause, as she is known in her magical girl form. Her investigation leads her to the motto of the Magical Five: “He who laughs last laughs best”. This suggests that one of the Magical Five has a connection to the Babel Brigade.

As Just Cause’s investigation goes on, they come under attack from a character we saw earlier in this very episode. The tourist that Asuka met earlier is actually a Colombian terrorist known as Crescent Moon Sandino. She gets high off a combination of drugs and heat to better absorb magical power, and is even able to block Just Cause’s bullets with her shield.
Sandino is seeking revenge after her family was killed by a US bombing run against the Disas. 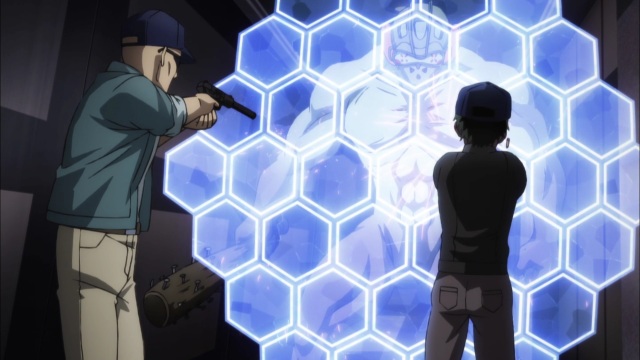 Aaron and Julia take on a Voorhees-class Disas

Whilst Just Cause keeps Sandino occupied, Aaron and Julia end up encountering a Voorhess-class Disas. Not as powerful as a Halloween-class, but it does take multiple magic rounds before its barrier is shattered enough for Julia to shoot it dead. 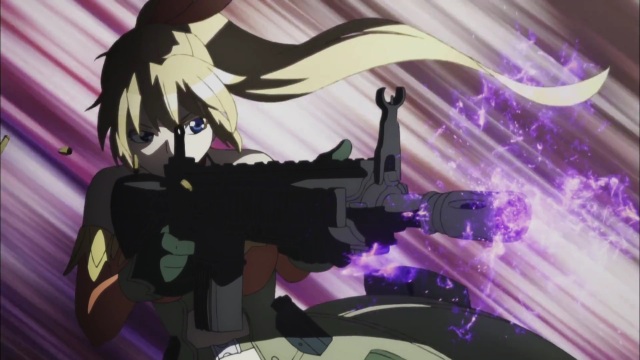 With a little help from some explosives that had been set up earlier, Just Cause is able to bring the fight against Crescent Moon Sandino to an end. Sandino is just happy that she didn’t have to kill a kid: she lost her daughter in the war against the Disas.
Wounded as she is, Sandino won’t be answering any questions. Just Cause shoots her dead.

This episode was probably the biggest departure from the manga we have had so far, at least as far as I know. The study session, the Tanabata festival and Sandino are not things that I have come across in the manga, so presumably that stuff was anime original.
Some of the manga was adapted, though. More specifically, we got a snippet of chapter 4 (Mia talking to Aaron and Julia about going to Japan), and chapter 11.
Chapter 11 was changed a bit, though. In the manga, Just Cause, Aaron and Julia just fight the Voorhees-class Disas. It is still finished off in the same manner, though.
Sandino is a new addition for the anime, and it gave us a bit more action than in the original manga. I am perfectly fine with that, it gave us another chance to see Just Cause in action.

I enjoyed both perspectives we got from this episode: Asuka and company enjoying the festival, and Just Cause’s fight. The festival stuff in particular gave us even more Asuka x Kurumi stuff – I feel like they’ve dialled up Kurumi’s attraction to Asuka for the anime. That’s fine by me, too.

So, yeah, a pretty great episode. I enjoyed it a lot.