Star ☆ Twinkle PreCure is the sixteenth entry of the PreCure franchise, which has a space theme going for it. We start, of course, with the introduction our main character and lead Cure, Hikaru Hoshina.

Since this first episode is all about introductions, we shall begin with Hikaru Hoshina. She absolutely loves space, and the first we see her doing is observing the stars with a telescope. She has a notebook in which she draws her own constellations, and one she happens to draw suddenly comes to life.

Here’s our fairy mascot for this season

It pleases me to see the tradition of the mascot colliding with the main character continues to be a thing, though it seems the creature comes out of it a little better off than Hikaru.
The creature then ‘abducts’ Hikaru.

Hikaru and the creature in ‘space’

Hikaru gets to fly through space, or something that is an approximation of it. As she does so, she happens to spot a heart-shaped that is covered in dark aura. However, she wakes from her dream shortly afterwards.
Well, I say dream – the creature is very much real, though it departs from Hikaru’s house. She chases after it, but only after saying a formal good morning to her family.

Hikaru talks with the old man who gave her her notebook

Hikaru’s chase leads her to the nearby observatory, where she eagerly tells the old man there about the creature. We also learn that the old man was the one who gave Hikaru her notebook, and he is pleased to see how much she has filled it out.
Hikaru’s pursuit of the creature continues, but then hunger strikes.

Hikaru shares a Star Doughnut with the creature

Hikaru pulls out a Star Doughnut to eat, and the creature suddenly appears. Hikaru happily shares her doughnut, and decides to give the creature a name: Fuwa. Hikaru and Fuwa just spend some time together, with Fuwa eventually drifting off.
The relative peace is soon interrupted, though.

Fuwa makes a rocket ship appear out of nowhere

Well then, it’s time for a couple more introductions. There are two aliens aboard the rocket, though it seems the more human one of the pair struggles with rocket sickness. 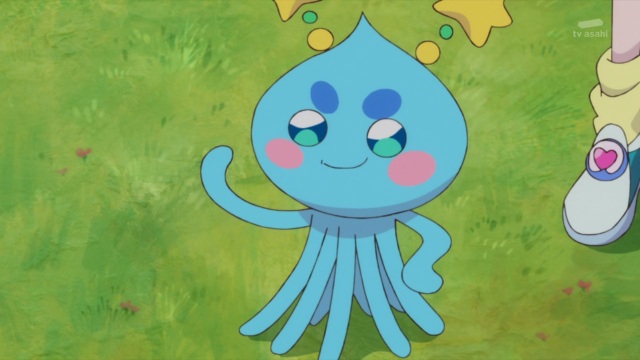 Hikaru meets Lala and Puruns, who are surprised to see that Fuwa is with her. As it turns out, Fuwa actually already has a name: Spegasus Pulalan Mofpit Prinsewink. Hikaru decides it will just be easier to stick with Fuwa. Lala and Puruns were travelling through space in search of the legendary warriors Pretty Cure. Their conversation is soon interrupted, though. 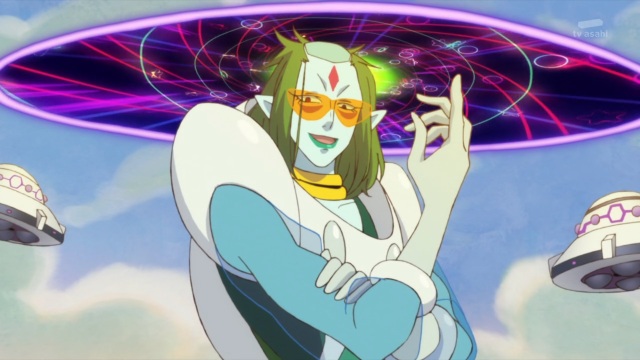 A bunch of Adamski UFOs (according to Hikaru – she is really into her space stuff) emerge, and we meet our first villain of this season: Kappard. He is a member of the Notraiders, a group intent on capturing Fuwa in order to use her power to take over the universe. Puruns grabs Fuwa, and make a hasty retreat with Lala into their rocket. They end up with one extra passenger. 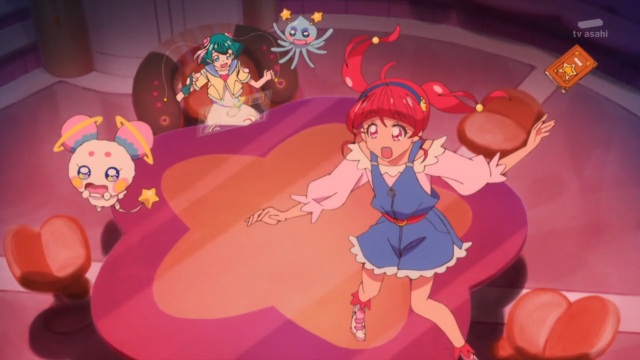 Hikaru manages to board the rocket as well

The rocket escapes into space, but Kappard continues following them and attacks. The rocket gets damaged, with Fuwa being pulled out into the vacuum of space. Despite being told not to, Hikaru follows after Fuwa.
Fortunately, Fuwa prevents this from becoming the shortest ever season of PreCure, as her power allows Hikaru to survive in space. Kappard is still determined to capture Fuwa, but Hikaru’s desire to protect her awakens a new power.

An ink bottle pendant and a pen, which are the latest transformation trinkets

Naturally, it is now time for the first transformation of the season. 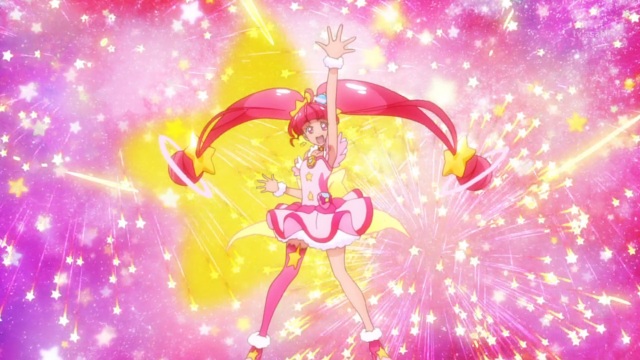 Cure Star makes her debut. Kappard is impressed after seeing Fuwa’s power in action, and he believes things will get interesting with the appearance of one of the legendary warriors. He doesn’t fight alone, either.

Kappard scrambles Notrey soldiers, who attack Cure Star. Of course, since this is Star’s first transformation, she takes some time to adjust to her new abilities. 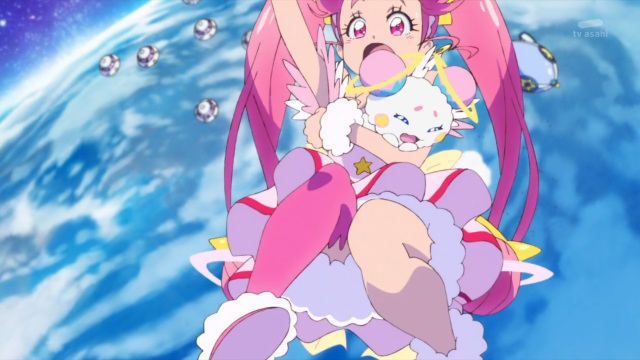 Not quite the traditional ‘jumped too high’, but it will do considering Star is fighting in space 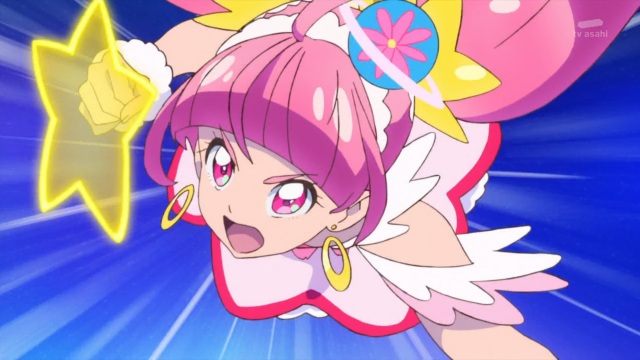 Cure Star goes on the offensive

After adjusting to her new abilities, Cure Star fights off the Notrey soldiers. When Kappard joins the fray, Cure Star uses the first special move of the season.

Cure Star is able to drive Kappard off with her PreCure Star Punch, but he will definitely be back. After the fight is over, everyone returns to the rocket.

Fuwa makes it so Lala and Hikaru can understand each other

Up until this point, Lala has been speaking in an alien language. Fuwa makes it so that Lala and Hikaru can understand each other. Just as Hikaru wonders what kind of creature Fuwa is, the rocket ship starts plummeting back to Earth.
This first episode ends with two characters in particular noticing the rocket falling, mistaking it for a shooting star.

Well, my first impression of Star ☆ Twinkle PreCure is an extremely positive one. I will admit I was a little unsure about Hikaru’s voice at first, but it had grown on me by the time this episode ended.
Lala is great, too – she’s so cute. I like her a lot.
As for the mascot characters, they’re doing their job. I’m sure I’ll form a proper opinion of them after a few more episodes, but at least they aren’t the worst mascots I’ve seen within the Pretty Cure franchise.

Cure Star’s debut was brilliant. We didn’t get a monster of the week, but I would certainly be OK with PreCure fighting off Notrey soldiers each week. Kappard also immediately got involved in the battle, which was also nice to see. Not many PreCure have the honour of fighting in space, and yet it is the first thing Cure Star does here.
I thought the transformation sequence was good, too. We have had vocal transformation themes before (Go! Princess PreCure, for example), though I do believe this is the first time the one transforming sings. I liked it.

So Star ☆ Twinkle PreCure is off to a great start. I am very much looking forward to seeing Cure Milky’s debut in the next episode.