Any chance of Asuka leading a normal life slips further and further away in this fourth episode of Magical Girl Spec-Ops Asuka, as she and Kurumi embark upon a rescue mission. Might want to mentally prepare yourself before watching this episode, by the way. 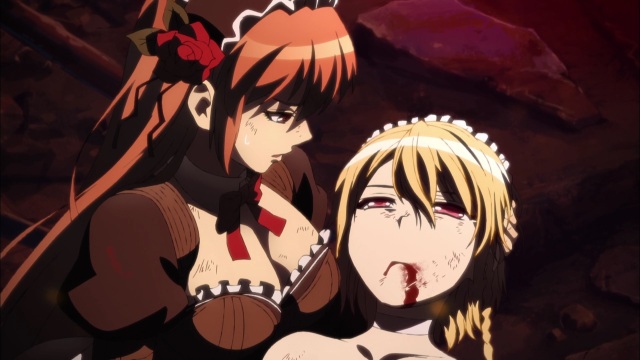 Asuka with Francine during her final moments

This episode starts with Asuka having a PTSD-induced dream, reliving the tragic death of Francine from back during the war. With her last breathes, Francine told Asuka that there are beautiful things in the world that are worth protecting. 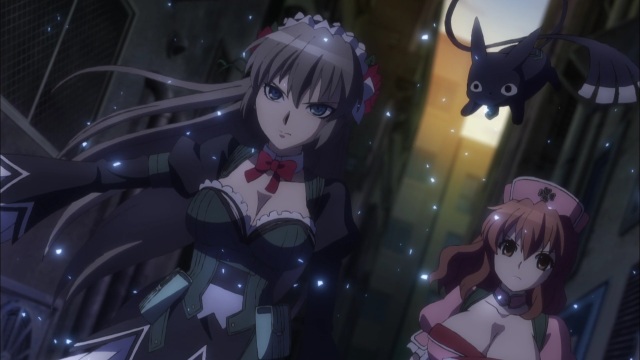 Asuka, Kurumi and Sacchuu embark on a rescue mission

Shortly after that, Asuka learns of Nozomi’s capture. The police have no intention of making a move to save her; they intend to use her as a sacrifice to earn funding to go after the East Asia United Front. Fortunately for Nozomi, Asuka and Kurumi are far more keen to go and rescue their friend. 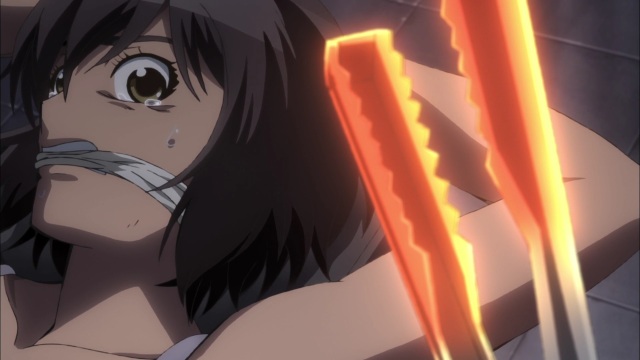 These scenes are harrowing

Whilst Asuka and Kurumi make their way to Nozomi’s location – information tortured out of Kim Kanth – Nozomi herself is tortured. I’ll spare the grisly details, but it is not pleasant, to say the least. 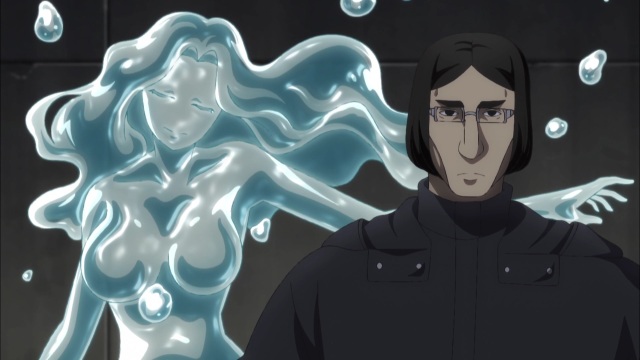 One of Nozomi’s torturers – Storozh – is able to manipulate water

Abigail films as two Russian magical mercenaries, Storozh and Povar, torture Nozomi. When Nozomi has a chance to speak, she says she is willing to do whatever they want. Unfortunately, Abigail only wants her as bait to lure in magical girls 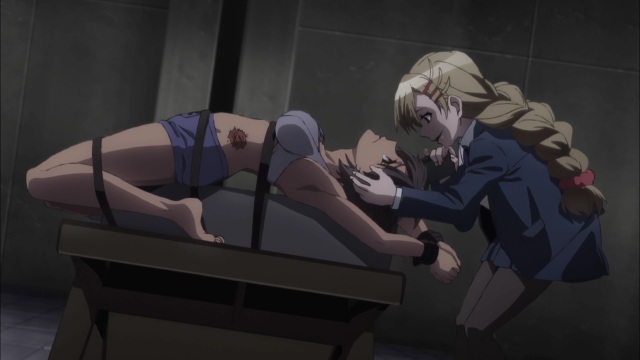 Abigail tells Nozomi that she is just bait

As Nozomi’s torture continues, Asuka and Kurumi arrive. They don’t go unnoticed, though. 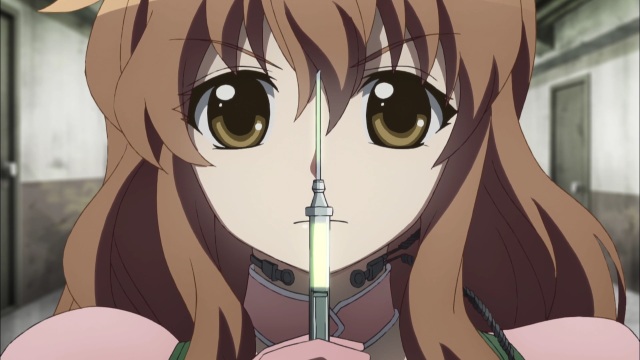 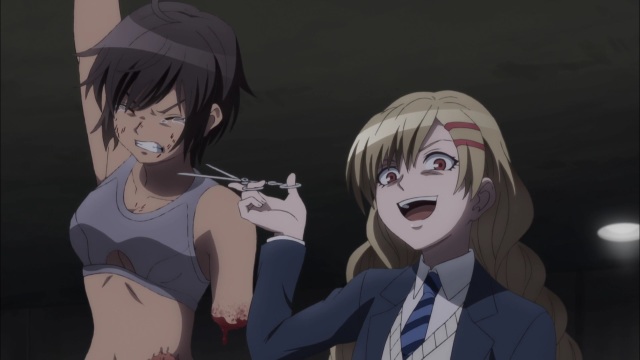 Asuka demands that Abigail lets their prisoner go, and Abigail agrees. She cuts off Nozomi’s arm, claiming that she was actually aiming for the chain. When she points her scissors at Nozomi’s neck, Asuka drops her weapon. The moment it hits the floor is Kurumi’s cue. 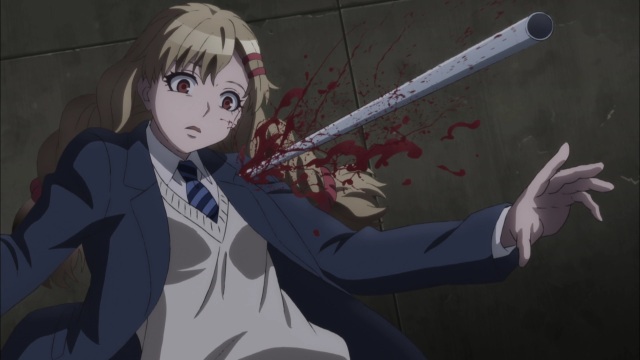 Kurumi’s syringe also happens to be a ranged weapon

Kurumi fires her syringe at Abigail, and swiftly grabs Nozomi whilst Asuka keeps the two Russians at bay with her gun. Once Nozomi is secured, they head out onto the street. Asuka has Kurumi go on ahead with Nozomi, since she knows that their enemies will be pursuing them. 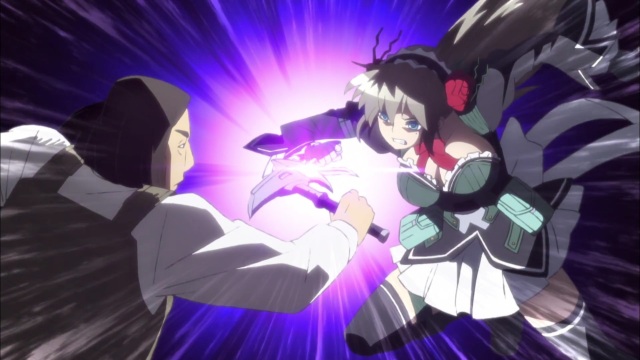 Povar’s weapon is a match even for Asuka’s karambit

Asuka ends up fighting Povar and Storozh, whilst Abigail goes after Kurumi. This is where this episode ends.

This episode actually skipped ahead a bit, and adapted Asuka’s PTSD dream from chapter 14 of the manga. In the manga, she woke up to find Kurumi sleeping next to her. I’m hoping we that we don’t miss out on that particular scene should the rest of that chapter be adapted, because it is quite the sight.

The rest of this episode was adapted from chapter 5 and most of chapter 6 from the manga. Abigail talking to Nozomi whilst grilling that meat was an extra scene added in the anime. Sticking that pipe down Nozomi’s throat was also something not in the manga – it made an already harrowing scene even worse somehow.
I believe that covers the changes between the manga and anime – pretty much just some extra bits.

I’ve mentioned it several times, but I think it is worth repeating. Nozomi’s torture might just be the most harrowing scene we’ve had so far in Magical Girl Spec-Ops Asuka. I knew it was coming, but seeing it animated makes it even worse.
Storozh and Povar are menacing, too. They’re just in it for the money, but I shudder to think how many people that they have tortured in the same way.

I would say Nozomi is safe now, but she and Kurumi have a rather angry Abigail chasing after them. Going to have to wait until the next episode to see how that plays out, though.

I enjoy writing, manga, anime and video games, so naturally here on my blog, you will find anime reviews, Nintendo news and other such things that I deem interesting.
View all posts by Rory →
This entry was posted in Episodic and tagged Asuka Otori, Episode 4, Episodic, Kurumi Mugen, magical girl, Magical Girl Spec-Ops Asuka, Military, Winter 2019 Anime. Bookmark the permalink.