A key part of any adventure is quests, and the Hero’s Party embark on a few of them in the third episode of ENDRO!.

This episode is all about the quests. Whilst the other parties receive quests requesting for them to pick up specific items from various dungeons, Yusha’s party gets a more simple one: find a cat.
Returning to the Adventurer’s Guild the next day, the Hero’s Party end up with the same quest: find a cat. They decide to pick up a few additional quests as well, which all coincidentally happen to be the same thing: find a cat.

Despite receiving the same quest five times, the Hero’s Party manages to successfully complete all of them. During the evening, they discuss the possibility of becoming professional cat finders.

Yusha considers defeating the Demon Lord with the power of cats

Yusha is still a Hero, so she needs to be prepared to take on the Demon Lord. She does consider the possibility of using cats to do so.
One more trip to the Adventurer’s Guild later, the Hero’s Party is ready for another cat finding quest. Instead, their quest is “Go obtain moonlight moss from Silver Bone Cave.”
As Yusha and the others set off, they come across a young girl who is crying. Her cat has disappeared, so Yusha decides that they will find it for the young lass. 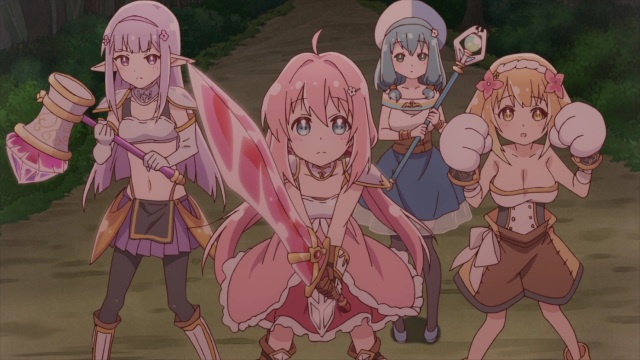 Asking the local townspeople about the cat, Yusha and the others end up leaving town. They come across a monster which they easily defeat, though night falls. Yusha decides that they should camp out, but there is a slight problem.

Seira accidentally brought a bow instead of food

Seira was in charge of bringing along provisions for their little trip, but brought a now along instead. It doesn’t help that all items appear to be contained in Cartado, which is why Seira made the mix up in the first place. Fai really does not like the idea of going without any food for the night.

In order to keep Fai occupied whilst Yusha goes to get some food, Seira is left with no choice to but to let her chew her ear. To make matters worse, Mei has the “Imperial Feast” Cartado, but refuses to use it no matter what.
After Yusha returns with food, and the morning arrives, the Hero’s Party continues their journey. They find the Red Spider Tower, where a nearby man tells them that he saw the cat they’re looking for on the top floor of the tower. 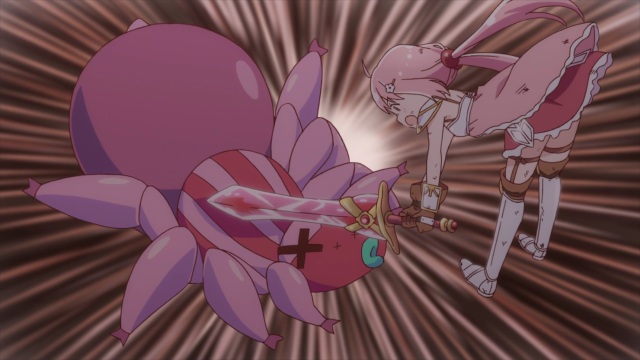 Yusha deals the finishing blow to the boss of the tower

Yusha is able to find a hidden staircase leading straight up to the top of the tower, so the Hero’s Party takes that and finds the boss of the tower waiting for them at the top. It’s a differently coloured version of the monster they fought earlier, though this one is stronger. Eventually, though, Yusha and the others defeat it. However, they have one more problem to overcome: the cat they are seeking is hanging from the ceiling, and nobody can reach it.

Earlier on, Seira claimed that she was no good with a bow. That’s actually a lie, she just has poor vision and has to wear glasses. When she does so, she is a competent archer, and able to shoot the thread holding the cat up. Seira doesn’t normally use a bow, simply because she doesn’t want to wear her glasses all of the time and be thought of as a bookworm.

The cat is returned safely to its owner, and the Hero’s Party realise that they completely ignored the actual quest they were given.

Another fun episode of ENDRO!. The Hero’s Party receiving the same quest multiple times was pretty amusing, as too was Yusha’s plan to use cats to defeat the Demon Lord. It’s a strategy that would probably work fairly well against me, too…

I get where Mei is coming from when she refuses to use her rarest Cartado. I tend to be the same way when it comes to RPGs; I try to avoid using items as much as possible. Even when I’m facing the final boss and will have no use for them after that battle, I’ll still tend to just not use them.

We got a fun little adventure for the Hero’s Party out of this, too. It wasn’t anything too taxing, but it did provide some rather amusing moments. The boss of the tower being a recoloured monster was pretty amusing, and something that will be familiar to almost everyone who has played an RPG.

Seira being competent at archery, but only whilst wearing glasses, was also pretty amusing. I wonder if her talent with the bow will come up again in the future?

Mao was absent for this episode, but I’m sure she’ll be back soon enough. We have also yet to meet the princess seen in the opening, so that’s also something to look forward to.

I enjoy writing, manga, anime and video games, so naturally here on my blog, you will find anime reviews, Nintendo news and other such things that I deem interesting.
View all posts by Rory →
This entry was posted in Episodic and tagged Endro~!, Episode 3, Episodic, Fai, Fai Fai, Fantasy, Mather Enderstto, Mei, Seira, Winter 2019 Anime, Yukia Chardiet, Yusha. Bookmark the permalink.