Magical Girl Spec-Ops Asuka Episode 3: Another One of the Magical Girls

Episode three of Magical Girl Spec-Ops Asuka introduces us to our third magical girl, who is on a mission in Tijuana. Meanwhile, Asuka continues to try and live a normal life as best she can.

We start in Tijuana, located in Northern Mexico. Mia Cyrus, accompanied by ISA members Julia and Aaron, raids a drug cartel’s base. Mia is one of the Magical Five, also know as Magical Girl Just Cause Mia. After blasting away their enemies, they come across a rather unfortunate person who mutters something about a ‘Babel Brigade’. 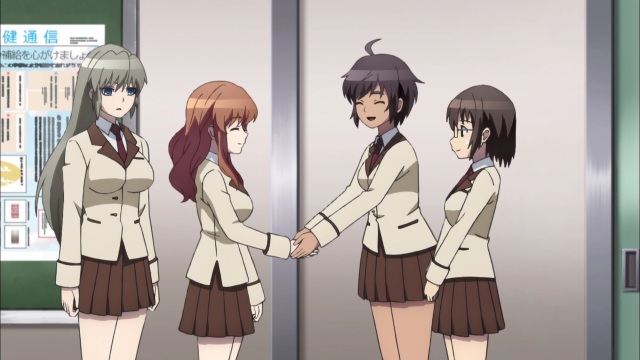 Turning our attention back to Asuka and Kurumi, the latter meets Asuka’s friends. There’s a slight hint of jealousy present when she does so, too. All four eat their lunch together, with Kurumi insisting on feeding Asuka some of her steak.

Kurumi with her ‘goddess’, Asuka

Whilst they are eating, Nozomi wants to know what Asuka and Kurumi think of each other. Kurumi has no hesitation in saying that Asuka is her goddess, whilst Asuka calls Kurumi someone that is close to her and always helps her out.
Sayako’s trauma rears its head again, but Nozomi helps her to calm down. She believes that the Magical Girls will save them if they ever find themselves in any trouble. Changing the subject, she asks Asuka and Kurumi if they want to go swimming. Imagining Asuka in a bikini, Kurumi agrees instantly.

Asuka and Kurumi working out

The school has quite a decent selection of gym equipment, which Asuka and Kurumi put to use. As they are working out, Asuka wonders why someone in research needs to do so. It is because Kurumi is still a magical girl. We also get a glimpse of Kurumi’s past, and it was not a pleasant one. Kurumi wonders the same thing of Asuka. For her, it is because she is afraid of becoming weak.

Kaede and Shima of the M Squad

Moving on, Iizuka takes Asuka to a maid café; or rather, a maid café that is a front for the M Squad. She meets two members of said squad, Kaede and Shima. Asuka still refuses to join the Spec-Ops, though Iizuka tells her that the world is changing and a new world needs a new power. More specifically, they need the power of Magical Girl Rapture.

Asuka and company go to the swimming pool

Following up on Nozomi’s offer from earlier, the four girls go to the pool. Nozomi is pretty much ogling every girl in sight, even comparing them to Asuka, Kurumi and Sayako. Talking of Sayako, she notices the diving board and decides that she has had enough of not being able to move when she is scared. 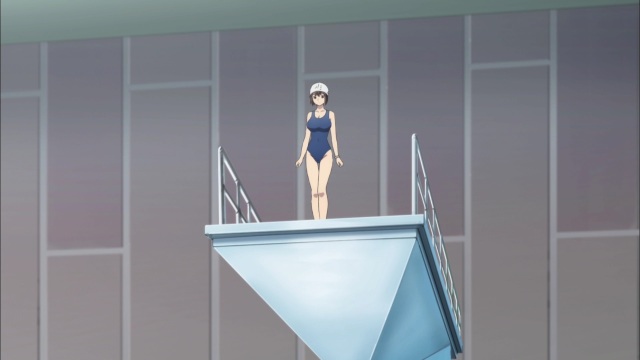 Sayako gathers up her courage to dive from the highest board

As Asuka, Kurumi and Nozomi chat, they notice that Sayako isn’t with them. Kurumi spots her at the top of the diving board. Sayako is reluctant to dive at first, but recalling being saved by a Magical Girl, she is able to gather up her courage and jump. She dives successfully, though her friends have to dive in the pool to grab her when she faints afterwards.

After the pool, Asuka, Kurumi, Nozomi and Sayako walk home together. They happen to pass by a cinema, and Nozomi suggests that the four of them catch a film together. She picks Cheerleader Samurai vs Megaton Shark, and goes ahead to book tickets for everyone. After she gives everyone their tickets, they all part ways. 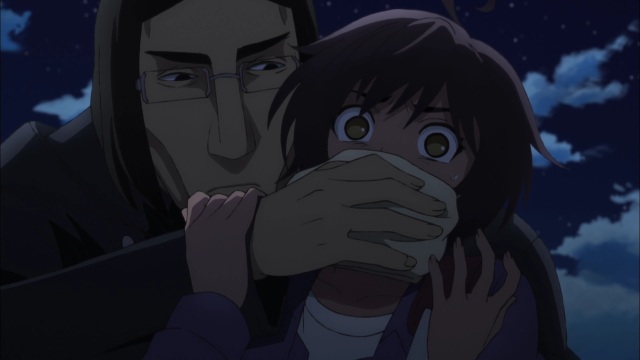 When she is alone, Nozomi gets kidnapped

We end this episode with Nozomi being kidnapped by two men, and Abigail.

This episode of Magical Girl Spec-Ops Asuka adapted the remaining part of chapter 3 (Mia’s investigation and the pool part) and chapter 4 (that would be the maid café, Kim Kanth’s continued torture, Kurumi meeting Nozomi and Sayako, the gym scene and finally Nozomi’s kidnapping).
These were not 1:1 adaptations, though – Kurumi wasn’t at the pool in the manga, because she hadn’t transferred by that point. Sayako’s trauma is another thing that’s not in the manga – that’s quite an interesting thing, because it is expanding on her character.
That’s the only thing about the pool scene that was changed – again, Sayako got a little more focus.
Nozomi accusing Sayako of perving on the girls in the pool went slightly differently in the manga – Sayako has prescription goggles. I’m sure you can imagine what Nozomi thinks of that.

For those who were disappointed that we only got to see Asuka in a bikini in Kurumi’s imagine spot, just have a little patience. Trust me on that one, I’ve read the manga.
On the subject of things that we didn’t see, the aforementioned chapters also have a second scene with Mia. I won’t go into details about it, because it is possible it may come up in the next episode.

As for what I thought of this episode itself: yeah, pretty good. Asuka is trying to live a normal life. We also got the first mentions of the ‘Babel Brigade’, who shall be our antagonists.
Some fairly nice fanservice, particularly in the gym scene. Asuka and Kurumi both look great, so I’m not going to complain about that. The swimming pool, too. For the most part, Asuka was left in peace for the majority of this episode. Iizuka is still trying to recruit her, but that’s not happening.

Unfortunately, Asuka’s peace is about to come crashing down due to Nozomi being kidnapped – but that is something for the next episode to cover. I am very eager to see it, because the action should pick up.