Hello, Happy World! are in the spotlight of the fourth episode of BanG Dream! 2nd Season. Poppin’ Party don’t seem to be too cheerful, so Kokoro and her band decide to get them to smile. 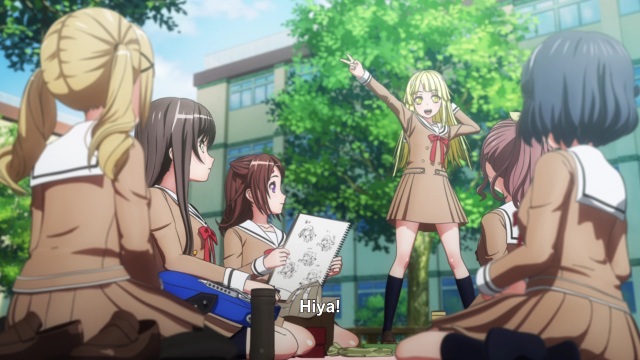 Kokoro makes quite the entrance

To kick things off, Poppin’ Party are discussing their upcoming show, and they are struggling to come up with stuff. Kokoro happens to see them from a window on one of the upper floors, and doesn’t even think twice about jumping out of it to get down to where PoPiPa are. 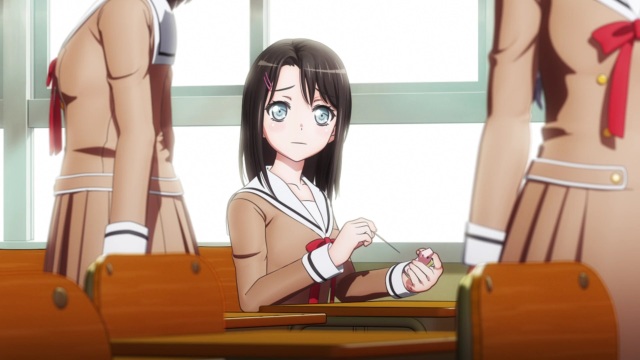 Kokoro takes a look at PoPiPa’s plans for their show, and she comes to a decision. She rushes off to grab Misaki, before returning. Kokoro decides that Hello, Happy World! will put on a show in order to make PoPiPa smile. 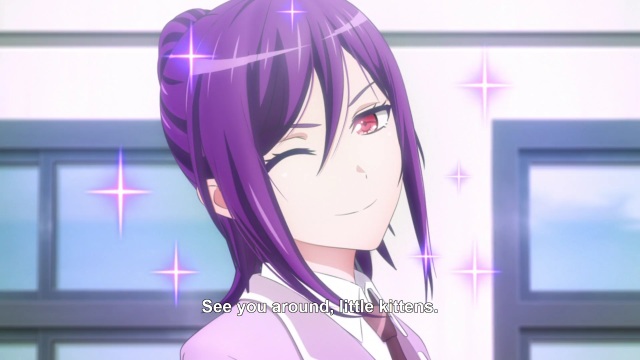 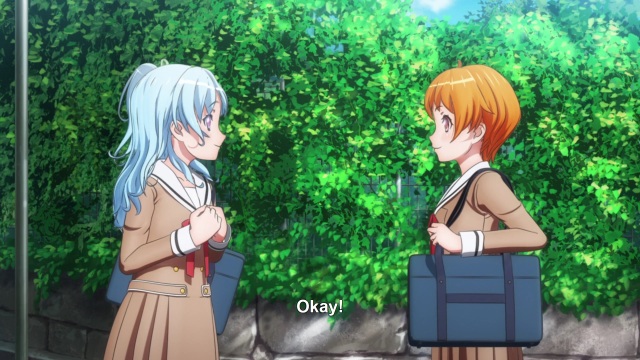 Kokoro calls for for a Hello, Happy World! emergency meeting, and tells them about her plan to make PoPiPa smile. Kokoro wants to have Hello, Happy World! fly, which is met with mixed reactions. She decides to go through with it, regardless. Kaoru handles getting invites out to Kasumi and the others. 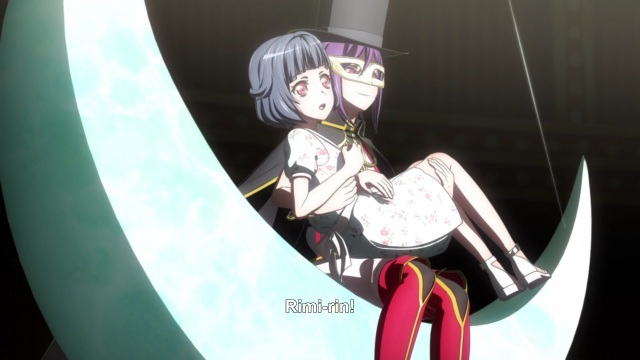 PoPiPa are invited to Kokoro’s cruise ship, the S.S. Smile, where Hello, Happy World! put on their promised show for them. First, is a performance of “Goka! Gokai!? Phantom Thief!”, including the return of Phantom Thief Kaoru from BanG Dream! Girls Band Party!. 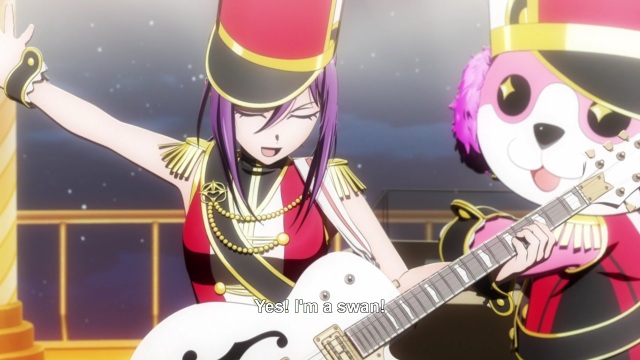 Attention is turned to the sky next, as Hello, Happy World! perform their second song, “Worldwide Treasure!” on a floating stage. Kaoru isn’t so great with heights, but when Kanon suggests that she is a swan, she is able to pull herself together. Then it is time for Kokoro and Michelle to fly. 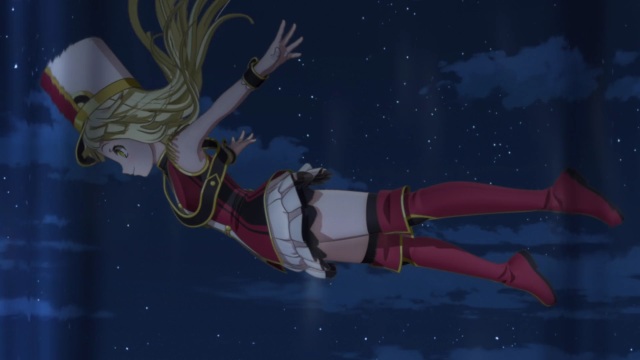 Kokoro leaps off the stage, without a parachute

One of Kokoro’s suit people gives Michelle a backpack, and then Kokoro just dives off the stage. She doesn’t even have a parachute. Michelle (or rather, Misaki, who is inside the Michelle suit) gathers up her courage and dives after her. 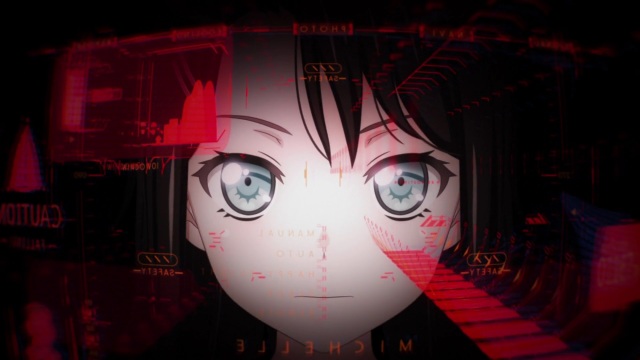 The backpack that one of Kokoro’s suit people gave to Michelle is not actually a parachute. Fortunately, Michelle has been equipped with a Happy Flight Mode which is activated by inputting the Konami code, of all things. 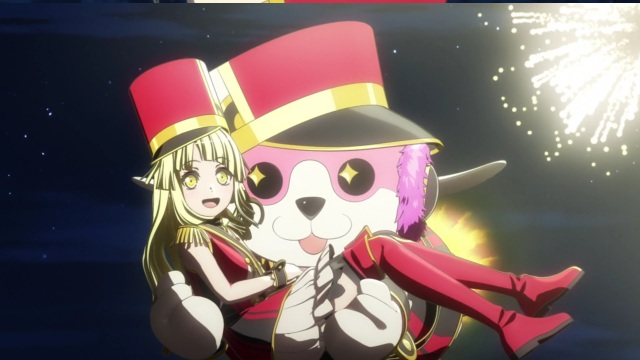 Michelle catches Kokoro and flies her to safety

Once Misaki has activated Michelle’s Happy Flight Mode, she catches Kokoro and they get to enjoy some fireworks together. They also see that they have achieved their goal of making the girls of Poppin’ Party smile. 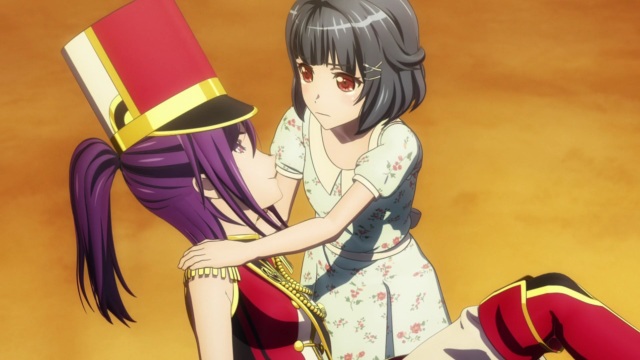 Kaoru faints after returning to the ship

Hello, Happy World! all safely return to the S.S. Smile, though both Michelle and Kaoru end up fainting. Still, Hello! Happy World achieved what they set out to do, so that wraps up this episode.

This episode felt like something that was lifted straight out of BanG Dream! Girls Band Party!☆PICO, which is absolutely fine by me. This has been the funniest episode of BanG Dream! 2nd Season so far.
For those who are unaware, Kokoro is rich. Like, stupidly rich. She has a squad of women in suits who are able to provide everything Hello, Happy World! needs in mere moments, whether she asks them directly or not.
You’ll also notice that Kokoro isn’t exactly the most sensible person out there. Poor Misaki, always getting caught up in Kokoro’s schemes. Also, Kokoro still has no idea that it is Misaki inside that suit…

The S.S. Smile and Phantom Thief Kaoru come from an event in BanG Dream! Girls Band Party!, ‘Happy Phantom Thief & The Luxury Cruise’. Kaoru was the Phantom Thief then, and Kanon ended up playing the role of a captive princess. Misaki had to get her back, by confessing her love to Kanon. Well, it was a scene that Kaoru made Misaki act out, but hey…

On that subject, it seems that BanG Dream! 2nd Season favours the MisaKoko ship. That’s fine, but personally I’m more into MisaKanon. Misaki and Kanon are the only two… let’s say ‘sensible’ members of Hello, Happy World!. As we saw with this episode, Misaki tends to end up in rather troublesome situations being around Kokoro.

A very enjoyable episode of BanG Dream! 2nd Season, all in all. Next time, Pastel * Palettes will be the main stars. That probably means that episode 6 will be an Afterglow episode as well. Guess we’ll have to wait and see.