Hugtto! PreCure Episode 47: Even the Smallest Plant Has Its Own Name

Quite a simple introduction for the forty-seventh episode of Hugtto! PreCure: the final battle continues. Let’s just jump right in.

A horde of Wild Oshimaidaa stand between PreCure and Kurai

The episode picks up directly from where the previous one left off, with Risutol and Bishin arriving on the battlefield. Risutol calls forth an army of Wild Oshimaidaa, and despite Cure Ange’s attempts at holding them back, they prove to be overwhelming. 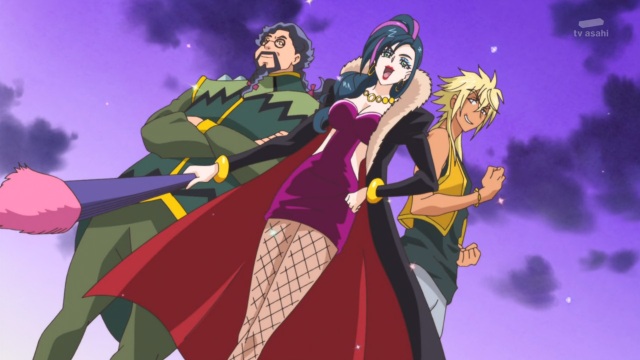 Fortunately for PreCure, not everyone has been affected by the time stop. Pupple, Daigan and Charaleet join the battle, and are able to purify the Wild Oshimaidaa with their own abilties; pretty impressive, if you ask me.

Traum joins the battle as well

Dr. Traum joins the battle as well, arriving in a giant robot. The number of Wild Oshimaidaa is quickly reduced, leaving only Risutol and Bishin to deal with. The person who steps up to confront those two is none other than Harry himself.

Harry transforms into his monstrous state, not to fight, but to prove a point. Harry accepts himself, and wants Risutol and Bishin to do the same as well. He is able to talk Risutol around, but Bishin doesn’t quite get it.

Bishin transforms and grabs Risutol, telling him to beg for his life. Risutol does not, instead apologising for not being there for Bishin. With a little help from Cure Etoile, Risutol is able to talk some sense into Bishin, allowing PreCure to purify him.
Risutol and Bishin are no longer a threat, but Criasu Corporation is half an ocean away. Only a select few teams of PreCure can fly unaided, and the Hugtto! Cures are not one of them. 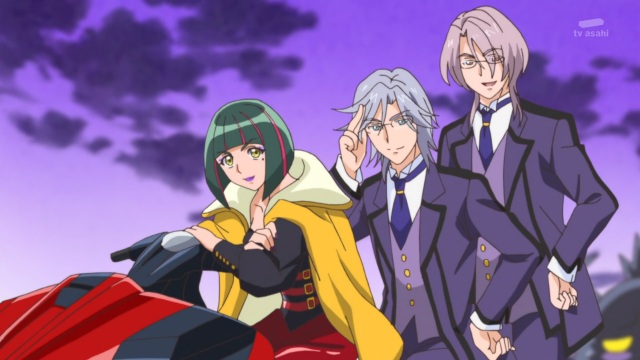 Gelos and her underlings arrive

Fortunately, Gelos has just the thing to get PreCure to Criasu Corporation where they can finally confront George Kurai.

George Kurai with the captive Hugtan

Kurai is waiting for PreCure inside Criasu Corporation. He manages to cage Cure Yell, and freezes the other four to the spot. However, Ange, Etoile, Ma Cherie and Amour have no intention of giving up. Unfortunately, things don’t go too well for them.

Kurai goes on about how he wants to save the future, and tortures four out of the five Cures by zapping them with lightning. Yell can only watch helplessly, the toge-power beginning to flow. She is mere seconds away from wishing time would stop, when Ange yells that PreCure never give up. 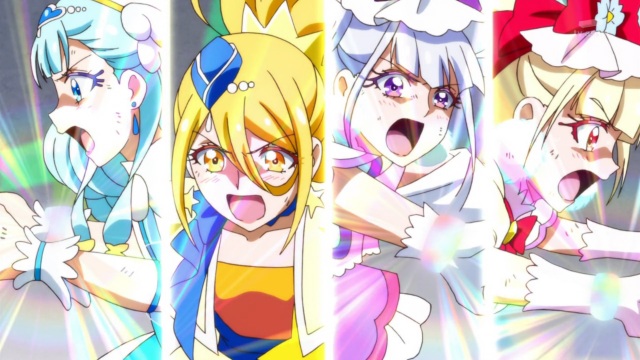 PreCure never give up

The girls break free from the trees, with Ange and Etoile attempting to break the cage that has trapped Yell whilst Ma Cherie and Amour try to break through the barrier protecting Kurai. Yell is freed and the barrier is broken, but the four girls are cast into a pit. As they fall, they offer Yell their support. 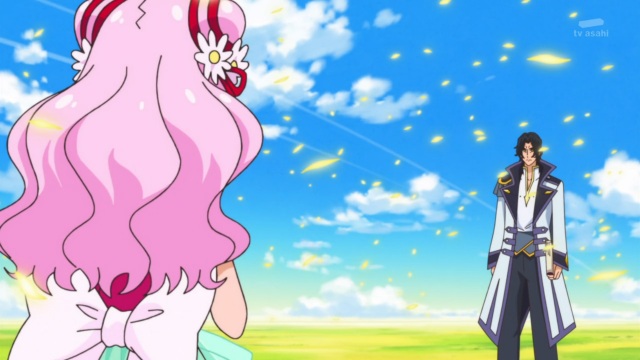 Cure Yell is the only one left who is able to face Kurai. He transports them to a field full of goldenrod – a flower which means ‘eternity’. Unfortunately, this is where the episode ends. Going to have to wait until next time to see how the fight against Kurai plays out.

This was a good episode. I particularly enjoyed seeing defeated foes return to lend their aid to PreCure, in order to repay them for allowing them to dream again. Pupple and the other former Criasu Corporation employees are great, and even Harry pulled his weight as well. Its nice to see characters besides PreCure capable of standing up against the threat of Criasu.

Then we have the set up for Cure Yell confronting George Kurai. I don’t know how that particular battle will play out, but I suspect it will involve Yell helping Kurai to overcome something painful from his past. Hopefully we will get at least a bit of physical combat before it gets to that point, but we shall see.

The end is nigh; let’s hope this season of PreCure can provide us with an excellent ending to live up to everything that it has offered before.