After taking a break for the new year, Hugtto! PreCure returns. Episode 46 is the beginning of the end; this season only has a few episodes left to go.

Kurai and Hana cross paths in a dream

First things first, we start with a dream that both Hana and Kurai appear in. We’ll be seeing Kurai a lot more in these final episodes, and he is kind of unsettling. Both Hana and Kurai wake up crying after their shared dream. 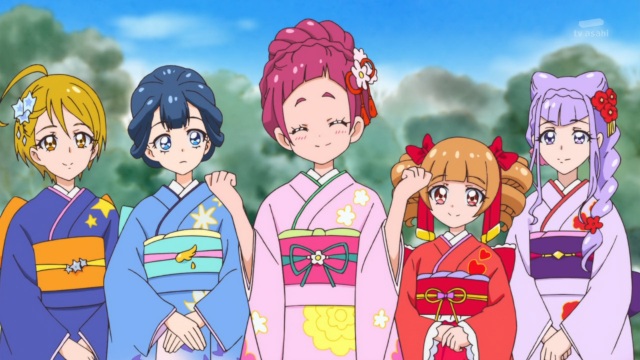 Celebrating the new year together

Everyone gets together to celebrate the new year, which means that the girls get to wear some rather nice looking kimonos. Hana is also looking forward to a whole host of upcoming events during the year. When she mentions Valentine’s day, that is accompanied with her imagining giving chocolates to Homare. Ruru is looking forward to eating more food.

Following that, the Nono family and most of the former Criasu Corporation employees get together to share a meal. However, there’s a lack of soy sauce so Hana volunteers to go out and pick up some more. Ruru asks if she should go along as well, but Hana insists that it is fine.

When Hana rushes into a lift just as it is closing, she is met with an unexpected sight. Standing before her is George Kurai, who is holding a bunch of flowers. Since they are alone, Kurai tells Hana that it was not him that froze the time of the people of the future; instead, they brought that upon themselves.
Whilst that happens, Ruru asks Traum about Kurai. Traum says that he is in the way of their path to happiness; or perhaps, more accurately, PreCure are in the way of his path to happiness. Kurai is a man who does nothing; simply observes.
Kurai tries to make Hana give in to despair, but she only has one answer for him.

Kurai tries to get Hana to go with him, but she refuses. Hana is PreCure, after all, and she will be the one to protect the future. The lift doors open and Saaya and Homare join them, but Kurai retreats for now.

The girls have a sleepover

After Hana’s encounter, the girls decide that they should sleep over at her place. Little do they know, they have a very big day ahead of them.

Criasu go on the offensive

The following day, Criasu Corporation’s tower just appears out of nowhere, and time is stopped for everyone besides PreCure. They rush to the tower where Kurai awaits them. He brings out a small army of Wild Oshimaidaa, so PreCure transform.

There is an almost limitless supply of toge power in the air, so PreCure have a tough old fight to get through. 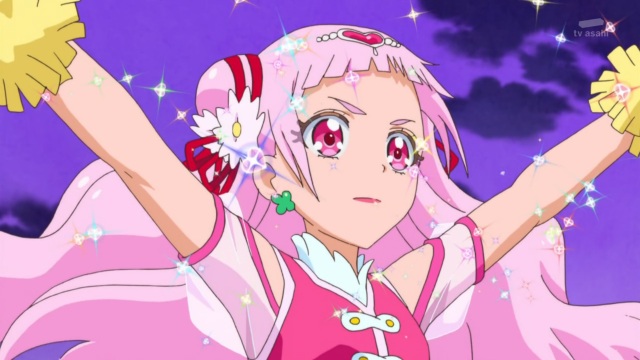 Cure Yell refuses to give in

PreCure may be outnumbered, but they too have an almost limitless supply of energy to call on: asu power. They are able to purify the Wild Oshimaidaa, but that is not the end of the battle.

Criasu’s tower transforms into a giant, which grabs Hugtan. Despite her best efforts, Cure Yell is unable to save Hugtan. Kurai makes a retreat, and the episode ends with Risutol and Bishin arriving on the battlefield.

So here we have it: the beginning of the end. Hopefully we get a final battle like the one seen in Splash Star – to this very day, that one still remains my favourite in the entire PreCure franchise.
Hana sure does look like that person we’ve seen in Kurai’s flashbacks… presumably that’s where the connection ends, though.

The new year stuff was nice; the girls looked great in their kimonos. It was also nice seeing a lot of familiar faces again, even if most of them did end up frozen in time.

For someone who supposedly does nothing, Kurai certainly seems to be getting involved in the fate of the world quite heavily. Perhaps all that observing and not being able to do anything is what drove him to actively interfere.

This episode was a lead in to the final battle, but it was still decent enough. I can only imagine that things will pick up during the next couple of weeks.