Thoughts on Bloom into You Volume 5

Without a doubt, Bloom into You was one of the best anime that aired during 2018. However, I’m not here to talk about the anime. Instead, I shall be focusing on the fifth volume of Nio Nakatani’s manga, which coincidentally happens to be where the anime adaptation concluded.
Volume five of Bloom into You contains chapters twenty-three through to twenty-eight, as well as one interlude chapter. 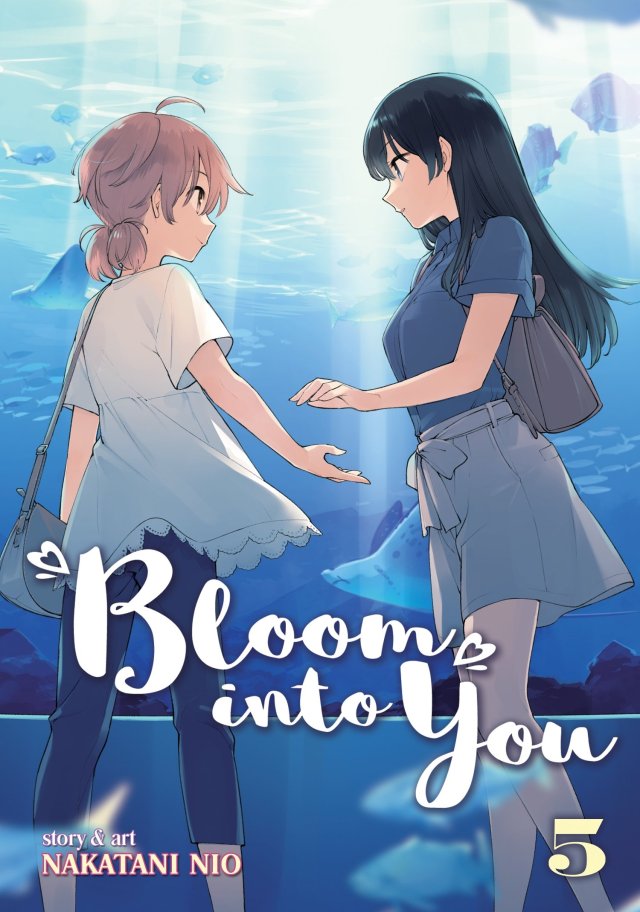 Front cover of Bloom into You Volume 5, featuring Yuu Koito and Touko Nanami

Going out!
They might be on vacation, but the play is still on everyone’s minds. Touko is already starting to worry about what will happen after it’s over, and Yuu wants to change the script’s ending. Stressing about the play isn’t the only thing they’re doing, though. It’s summer break, after all – so Yuu invites Touko out to the aquarium!

Volume 5 kicks off with an interlude chapter, which actually made it into the anime adaptation. It is the part where Miyako asks Riko about her preferences.

The main events in this volume are the script’s ending being change and Yuu inviting Touko to the aquarium. We also get some stuff with Koyomi besides the script writing, and Akari’s love life gets a little focus. Oh, and there’s quite an interesting development concerning Sayaka, too.

Whilst the script’s ending is changed in the anime, the adaptation ended before we could see how Touko reacts to the new script. That is something that is very much present in this volume, though, and let’s just say that she is not keen on it. Interestingly, her usual pillar of support isn’t on her side this time, either.
However, the change in the script may just be the very thing that Touko needed to make her realise a rather important thing about herself.
Yuu and Touko’s date at the aquarium provides some excellent moments for the pair; anyone who has seen it in the anime can also attest to that.

As for Koyomi, we learn what got her into writing. There is an event coming up where she can meet her favourite author, and she discovers that they are not quite what she had thought they would be.
Then there is Akari, who makes a discovery about the boy she likes. I won’t say anymore than that, though.

Sayaka becomes a little bolder in this volume, too, and has something that she wants to tell Yuu. Again, that is something I won’t go into detail about, but it is an important moment for her.

All in all, volume 5 of Bloom into You is an excellent one. Yuu and Touko’s aquarium date is easily the highlight of it, but there is also plenty of character stuff going on, and not just with the main characters either. This is the volume that made me appreciate Koyomi even more.

I enjoy writing, manga, anime and video games, so naturally here on my blog, you will find anime reviews, Nintendo news and other such things that I deem interesting.
View all posts by Rory →
This entry was posted in Manga and tagged Bloom into You, Manga, Nakatani Nio, Volume 5, yuri. Bookmark the permalink.