During my time blogging, there have been a few anime shows that I really regret not covering. One of them was the first season of BanG Dream!, so I intend to make up for that by covering its 2nd season. With that said, let’s dive in. 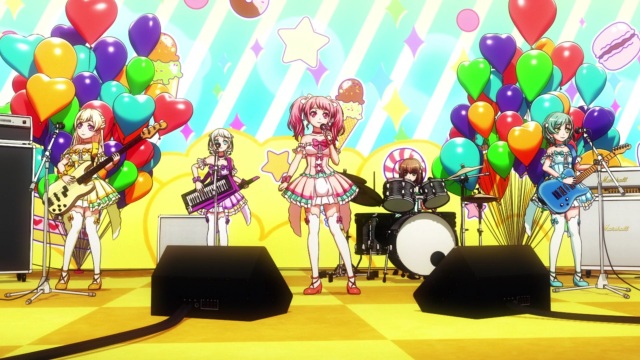 BanG Dream! 2nd Season immediately kicks off with Pastel * Palettes, who are performing “Shuwarin☆Dreaming”. For those unaware, Pastel * Palettes are an idol band – their origin story is covered in BanG Dream! Girls Band Party!, and it was pretty rough. They’re doing well for themselves here, though, so things worked out for them. 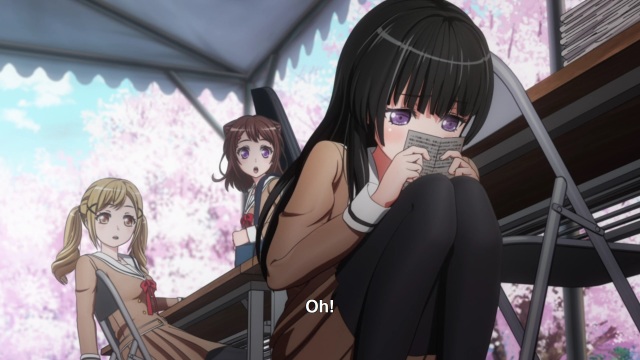 Rinko Shirokane, from Roselia, is the new student council president

Next up, we get some stuff establishing where each of our characters are at with their schools. At Hanasakigawa Girls’ Academy, Poppin’ Party are now second years, and the student council president is the shy Rinko Shirokane.

We check in on Haneoka Girls’ Academy, which is where Kasumi’s sister is joining as first year. The student council there is Hina Hikawa of Pastel Palettes, who is much more concerned with having fun rather than anything else. We also meet Ako, who is popular due to being a member of the band Roselia. 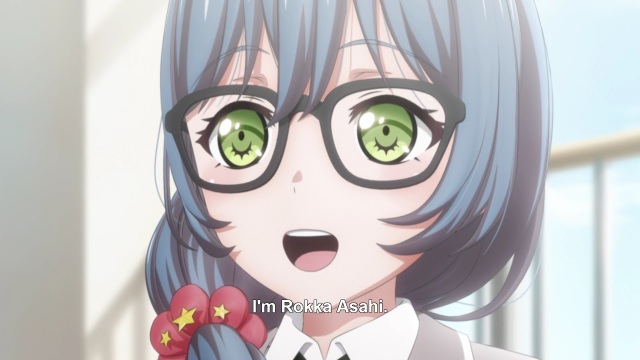 Rimi is feeling a little down

Outside of the schools, Rimi is feeling down because her sister has gone to study overseas. Her sister may be absent, but Saya’s bakery have plenty of chocolate cornets to offer her.

Kasumi in the bath, just because

Returning to the schools once more, the new classes for the year are revealed. All of Poppin’ Party end up together, except for Tae – or O-Tae, as her bandmates affectionately call her. Turns out that the new year keeps everyone busy, and Poppin’ Party can barely find any time to actually practice together.
Coincidence strikes when Rokka finds them, and asks them to perform at Galaxy. They agree. 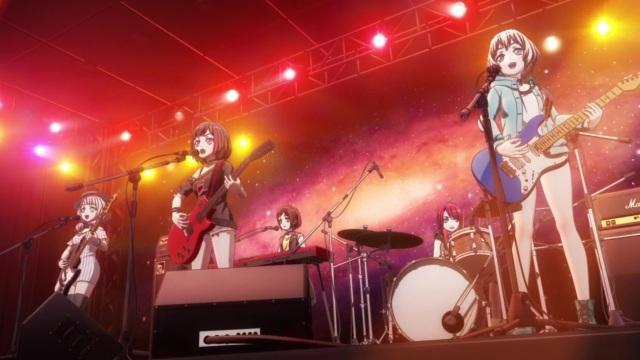 The second half of this episode is effectively the bands performing one after the other, so I’ll simply go through them one by one. First is Afterglow, who are performing “Scarlet Sky”. All five members of Afterglow attend Haneoka Girls’ Academy, and formed the band after Ran was put in a separate class from the other four.

Next up are Hello, Happy World!, who perform “Orchestra of Smiles”. I figure it is worth pointing out Kaoru there, on the right of the picture – she is very popular with the ladies, as we saw with Rimi earlier. Anyways, Hello, Happy World! was formed with the intent of making the whole world smile. 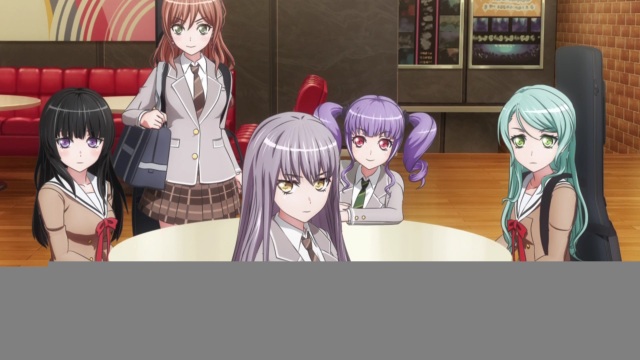 Following Hello, Happy World! is Roselia, who perform “LOUDER”. Out of all the bands, Roselia are probably the ones who are most serious in their pursuit of music. There’s something of a rivalry between Yukina and Ran. Yukina in particular might seem uptight, but she definitely has a softer side; particularly when it comes to cats. 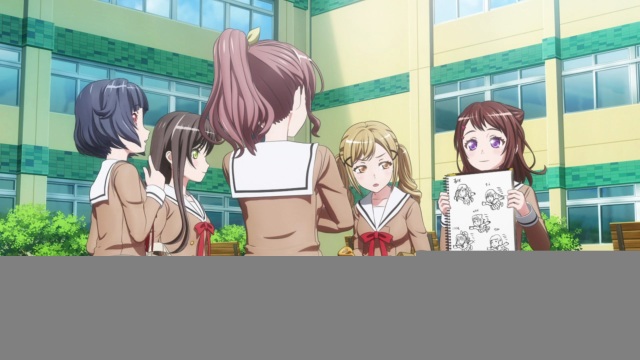 That brings episode 1 of BanG Dream! 2nd Season to an end, and I had a really fun time with it. It probably helps that I absolutely adore Kasumi, and I love seeing her back again. This episode also establishes what each of the bands are like, with each one being able to squeeze in a performance.
This episode was pretty much all introductions; any plot that may or may not arise will have to wait until the next episode, but this episode has given viewers a chance to familiarise the bands. This is particularly the case for those who haven’t or are unable to play BanG Dream! Girls Band Party!.

A enjoyable first episode, but what do I want to see from the rest of this season? Well, more yuri stuff would be appreciated – we had a few nice little moments in this episode. I’m hoping that Ako and Rinko in particular get a chance to shine; I absolutely adore the relationship they have in the mobile game, and am hoping carries over to this as well. More Kasumi and Arisa certainly wouldn’t go amiss, either.
I guess this is a given, but plenty more music would certainly be nice. Presumably all the songs will be originals, but if they find a way to bring in some of the covers as well I certainly wouldn’t mind – Poppin’ Party’s take on “Senbonzakura” is my favourite version of that song, and Afterglow’s “READY STEADY GO” and “Asu no Yozora Shoukaihan” are particularly excellent too.

BanG Dream! 2nd Season has been an excellent start to the winter season of anime, and I look forward to seeing what else each band has in store for us.