Toei has unveiled a fair bit of information about the sixteenth season of PreCure, Star ☆ Twinkle PreCure on their official website. More specifically, we now have the cast, staff, premiere date and story details.

Might as well start with the new PreCure warriors.

First up, we have Hikaru Hoshina/Cure Star. Eimi Naruse of Dempagumi.inc will be voicing her. Hikaru is a second year middle school student who loves stars and constellations. Being full of imagination and curiosity, she will investigate anything that interests her thoroughly. Hikaru also has a tendency to act on intuition.

For the first time, we have an alien Cure. Her name is Lala Hagoromo/Cure Milky, who originates from the planet Samaan. Konomi Kohara will be voicing her.
Whilst Lala is thirteen years old in Earth years, she is treated as an adult on her home planet. Lala ends up travelling to Earth in search of the legendary warriors PreCure. She has a strong sense of responsibility, but occasionally makes mistakes. 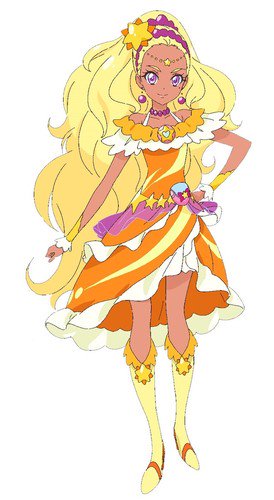 Kiyono Yasuno will be playing Erena Amamiya/Cure Soleil, a third year middle school student with a radiant smile. The most popular girl at her school, she is known as the school’s “sun”. Erena lives at a flower shop, where she sometimes works on top of taking care of her six younger siblings when her parents are busy.

Mikako Komatsu will be playing Madoka Kaguya/Cure Selene, a third year middle school student who does her best to be ladylike. Her father works in the government, whilst her mother is a world-famous pianist. Madoka holds national championship titles in piano and archery. She also partakes in flower arrangement and tea ceremony, and gets excellent grades. She is the student council president, and also known as the “moon” of the school. 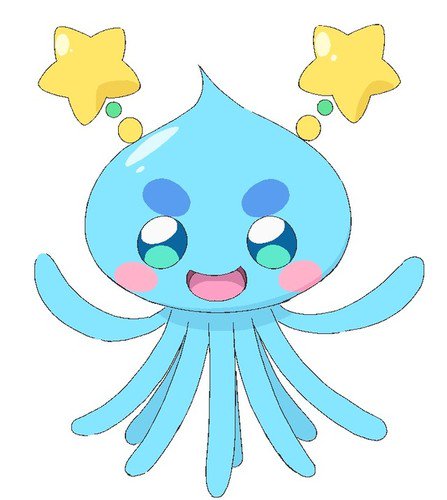 Hiroyuki Yoshino will be playing Prunce, an alien who once worked for the Star Princesses and now searches for the legendary PreCure. His special ability is transformation.

Hina Kino will be playing Fuwa, a fairy who is the last hope of the Star Princesses. Fuwa may just be a baby, but has the ability to release the power of the Princesses and create warp portals.

The story of Star ☆ Twinkle PreCure begins when Hikaru meets the aliens Lala, Prunce and Fuwa whilst watching the night sky. She learns of the Star Palace, where the 12 Star Princesses of the constellations kept the balance of the universe until they were attacked. Lala seeks out the legendary PreCure warriors in order to find the 12 scattered Princess Star Colour Pens and revive the princesses. When Fuwa is captured by an enemy, Hikaru wishes to save her. A Star Colour Pendant and a Star Colour Pen appear, allowing Hikaru to transform into Cure Star.
Following that, Hikaru works to collect the Pens and raise Fuwa, who is the key to reviving the princesses.

The director for the series is Hiroaki Miyamoto (One Piece Film Gold), whilst it is being organised by Isao Murayama (Maho Girls PreCure!). Character designs are by Akira Takahashi (Suite PreCure, Doki Doki! PreCure). Art design is being handled by series regular Ryuutarou Masuda and Riho Iida. The music is being composed by Yuki Hayashi (Hugtto! PreCure, My Hero Academia) and Asami Tachibana (Haikyu!!, DARLING in the FRANXX).

To cap off all this information, Star ☆ Twinkle PreCure will start airing on February 3rd, 2019.

Looking at these designs, I feel like they have come out of Aikatsu of all things. I feel like Lala in particular bears something of a resemblance to Aikatsu Friends!‘s Mio Minato.
The most notable character, though, has to be Cure Soleil. It’s fairly obvious why this is the case, so I won’t spell it out for you. I guess Lala being an alien is pretty unique, too.
With the basic information we have about each of the characters now, if you asked me to pick a favourite I’d probably have to go with Cure Selene. I just really like the purple cures – Moonlight, Macaron and Amour for example.

One of the staff that worked on Maho Girls PreCure! is involved with Twinkle ☆ Star PreCure… I feel like that is setting up expectations regarding yuri. They don’t have to give us any – I’m not expecting anything, but I am certainly hoping for it.
If we do get yuri, I’m predicting Star x Milky and Soleil x Selene as the ships. I feel like the latter may be more likely, particularly with Erena and Madoka being the sun and moon of their school respectively (assuming they attend the same school).

As for the fairies, Prunce (or Puruns or whatever) looks somewhat like a Healslime from Dragon Quest. Since he can transform, presumably he’ll have a human form. Let’s just hope we don’t have to put up with another mascot romance again.
Fuwa seems fairly generic, and I’m wondering if we really need another baby character by this point.

So the new character designs are all right. Presumably they’ll look better in motion. I’m not entirely sold on the fairies. It also seems that Fuwa may end up being more than just a fairy considering her importance in reviving the Star Princesses.

I’m looking forward to Star ☆ Twinkle PreCure, but it has a very tough act to follow. If it doesn’t end up being as good as Hugtto! PreCure, that’s fine – in fact, I kind of expect that to be the case, since it isn’t really celebrating any milestones. I suspect it will still be fun to watch, though.