I shall now be sharing my thoughts on the second light novel in the Sword Art Online Alternative Gun Gale Online series, written by Keiichi Sigsawa and illustrated by Kouhaku Kuroboshi. 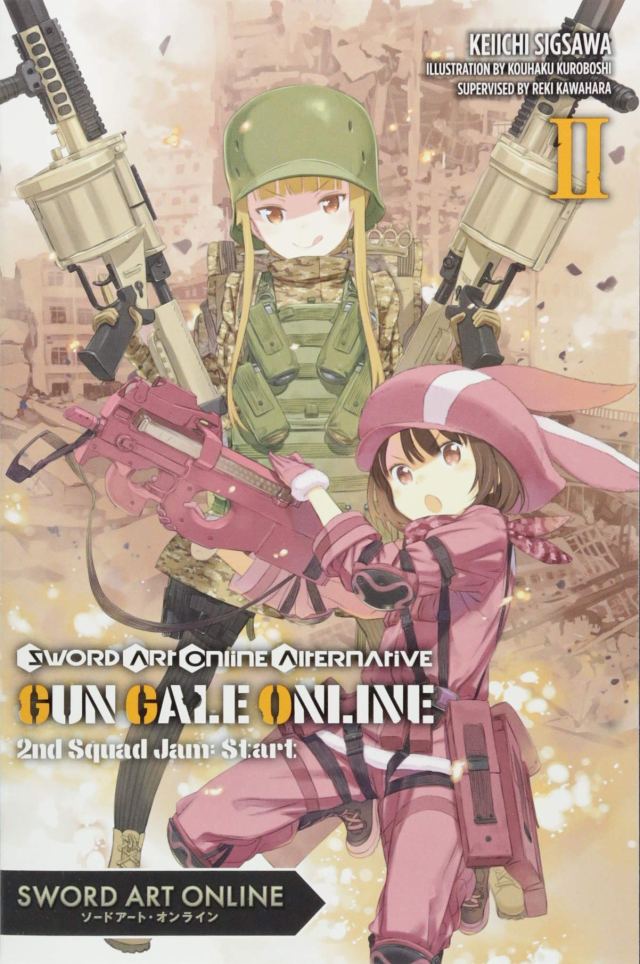 A brand-new battlefield awaits!
The second Squad Jam has been officially announced, but Karen Kohiruimaki barely shows any interest, despite being the champion of the first ferocious battle royale. Just when it seems like she won’t sign up, she receives a cryptic message from a creepy stalker who informs her that on the night of the second Squad Jam, someone will die.
Now, Llenn needs to take up arms and cut through her inexplicable anguish to prevent her worst fears from coming true!

Sword Art Online Alternative Gun Gale Online, Vol. 2: Second Squad Jam: Start is a ridiculously long title, though I suppose that tends to be the norm for light novels these days. That’s not what I want to focus on, though. I’ll start with the beginning.

The light novel pretty much recaps the first Squad Jam from the previous novel, framed as Karen and the IRL team SHINC members watching replays from said event. Presumably this is a way to reintroduce the key players of the first Squad Jam, who will also play important roles in the second Squad Jam.

Also introduced fairly early on is M, or rather his offline self. M’s real self is kind of pathetic, although I suppose we did get a glimpse of that side of his personality during the first Squad Jam.
M’s offline appearance is pretty much the whole reason that Llenn enters the second Squad Jam, though he goes about telling her the details in the most awkward way.

One key thing about the second Squad Jam is that Pitohui is able to participate this time around. However, she won’t be on the same team as Llenn, resulting in Karen having to at least one other person to team up with.

That is where Miyu Shinohara starts playing a bigger role in the story. Karen’s friend was briefly introduced during the first volume, but here she will actively fight alongside Llenn as Fukaziroh.
Fukaziroh is an excellent addition to the cast of characters, arguably being the one who is the most fun. Her impressive strength also lets her boast some serious firepower, and she and Llenn soon make a very formidable team.

Whilst the stuff that happens in the real world is hit and miss in this second volume of Sword Art Online Alternative Gun Gale Online, things get a lot better once the second Squad Jam actually starts. It’s an opportunity for characters like Pitohui and Fukaziroh to properly show off what they are capable of. Pitohui certainly lives up to the reputation that precedes her.
Fukaziroh does make a few rookie errors here and there, but Llenn has no problem depending upon her.

This light novel only covers the first half of the second Squad Jam, though that does include fights from both Team LF and Team PM4; Llenn’s and Pitohui’s teams respectively.

Much like the first volume, Sigsawa goes into incredible detail about each gun and the type of ammo it fires. Well, at least the ones that are lifted straight from the real world. The game of GGO is set in the future, and it has optical guns as part of that. Oddly enough, Sigsawa doesn’t really go into specifics about these types of guns. It just so happens that most players prefer live ammo guns, as it is easier to deal damage with them.

I pretty much tried to read through the beginning chapters as quickly as possible, since most of the offline stuff happening in them wasn’t the most compelling. When it came to Fukaziroh’s introduction and the second Squad Jam itself, that’s where I felt things really picked up.
Those beginning chapters did establish a reason for Llenn to return once more, but I wonder if it was so necessary to do so in the way it did here.

So not the most compelling start to this light novel, but overall I still found that it was a very enjoyable read – Fukaziroh in particular made things a lot more enjoyable.