Saaya is in the spotlight of the forty-forth episode of Hugtto! PreCure, which sees her performing in a starring role alongside her mother. 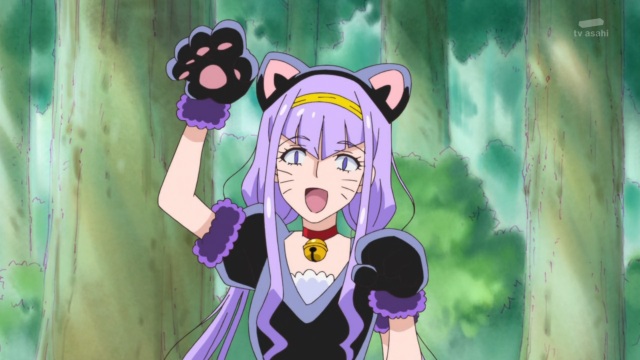 Already this is an excellent episode

With Saaya and Reira both prepared to shoot a scene for the film they are working on, they end up getting sent into the world from the script. Since it is set in a fantasy world, everyone’s outfits change to be appropriate for the setting. 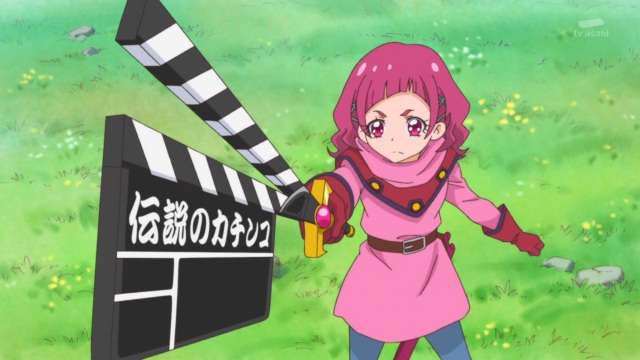 Of course, Saaya is still playing the princess. It appears that Hana has been given the role of hero, but she draws her sword to discover it is actually a clapperboard. Hana has to play the role of director.

Saaya and Reira may be in a different world, but the show must go on

With Hana playing the role of director, Saaya and Reira act out their scene. As that happens, they are also watched from the shadows by Ranze Ichijou, Saaya’s self-proclaimed rival. She doesn’t feel that her heart was in the scene, and pretty much challenges her to combat.

Saaya and Ranze have a fight scene

Saaya and Ranze act out a fight scene, but Saaya doesn’t quite manage it. She says she’ll do better next time and offers to shake Ranze’s hand, but Ranze refuses. She believes that only true rivals shake hands.

Saaya talks to Doctor Maki about her aspirations

After an amusing incident caused by Ruru, Saaya has a chance to sit down and talk with Doctor Maki. She reveals that she gathered all kinds of experience whilst working in medicine, before eventually discovering the path she is on now. 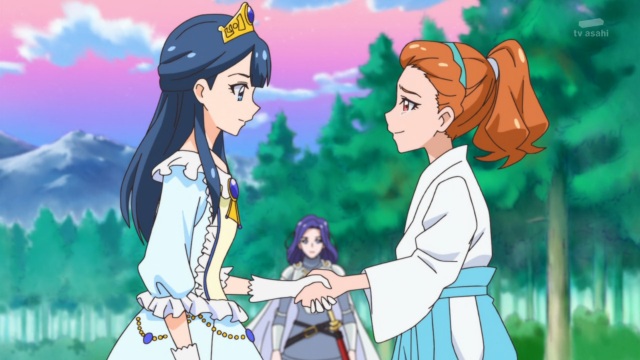 Getting back to filming, Saaya is able to flawlessly act out the scene with Reira. Afterwards, however, she says that she will quit acting after filming wraps up. It is not acting that Saaya wants to pursue, but a career in medicine. This comes as a shock to Ranze, who is upset at first but she understands Saaya’s decision in the end.

Whilst Ranze accepts it, Reira is not quite able to bring herself to do the same. Risutol takes advantage of this, using her toge-power to bring forth a wild oshimaidaa. The monster snatches Hugtan, so naturally it is time for PreCure to do their thing.

Reira has to accept that Saaya is becoming her own woman

During the battle, Saaya is able to go within the Wild Oshimaidaa where she finds both Reira and Hugtan. Reira is proud that Saaya is growing up, but she can’t bring herself to cheer her on. However, Saaya was able to touch Reira’s world, which allowed her to find her own dream.
PreCure defeat the monster after that, and everyone returns to the real world. The filming goes smoothly afterwards, with Reira and Saaya improvising a little bit.

Eh, not as cool as the time as when Hugtan conjured Cure Black and Cure White out of thin air

With everyone walking home, they realise Christmas is coming up. In her excitement, Hugtan manages to summon Santa Claus. That brings this episode to an end.

Well, first of all, it probably won’t come as a surprise that I really like black cat Ruru. But, she’s not the star of the episode.

Saaya’s episodes have been consistently excellent, and this one is no exception. She has been struggling with her future and this episode brings all that to a satisfying conclusion. It’s episodes like this one that make me feel I don’t quite show Saaya enough appreciation. She’s definitely up there as one of my favourite blue Cures, that is for sure.

I was a little hopeful that we’d get a Hana x Saaya episode when Hana was revealed to be the hero. Unfortunately that wasn’t quite the case; Hana’s role was slightly different from what her outfit suggested. Still was a very enjoyable episode, though.

Definitely a step up from the previous episode, and just an all round excellent experience that focused on Saaya. Next time, it should be pretty obvious we will be getting the Christmas episode.

1 Response to Hugtto! PreCure Episode 44: Handshakes are for True Rivals