The forty-second episode of Hugtto! PreCure focuses on Henri, as he and Homare are entering the world juniors ice skating championship. However, Henri’s skating isn’t the same as it once was… 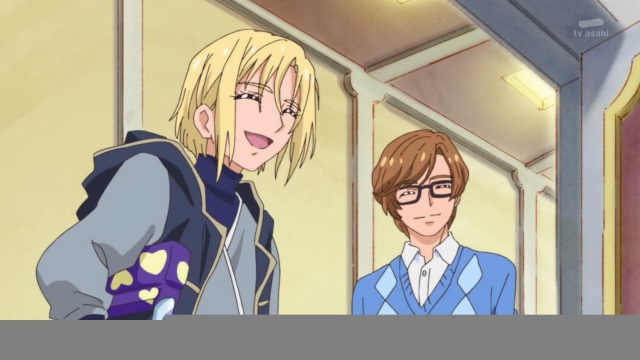 Before I start talking about the episode, I want to point out that there was a slight change to the opening. Did you spot it? It ties into this episode, and that’s all I’ll say on the matter.
So, ice skating championships are coming up, and Hana wants to cheer for Henri. She even designs a costume for him, but he rejects. Henri also happens to have the attention of a few fangirls, though Masato insists that they should leave him be so he can focus on the competition. Henri’s fine with it, though. 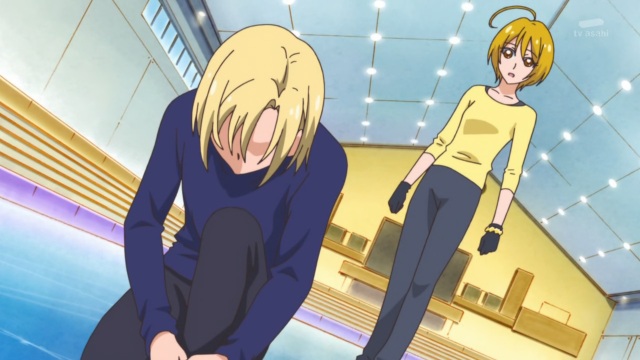 Homare and Henri practice together, but Homare picks up pretty quickly that Henri’s skating has changed. She can tell that he is injured, but Henri refuses to give it up. If his career must come to an end, he wants it to end on the ice. 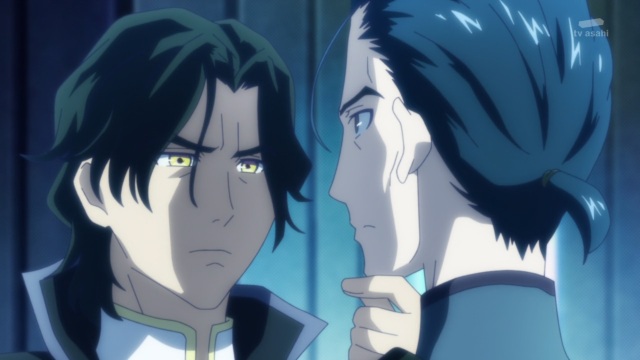 Risutol has his memory erased

Meanwhile, at Criasu Corp, Risutol is awakened. George has had his memory erased, and tells him to erase the world’s future to protect it from the torture of despair. Risutol obediently obeys – the resistance he showed previously has completely disappeared. 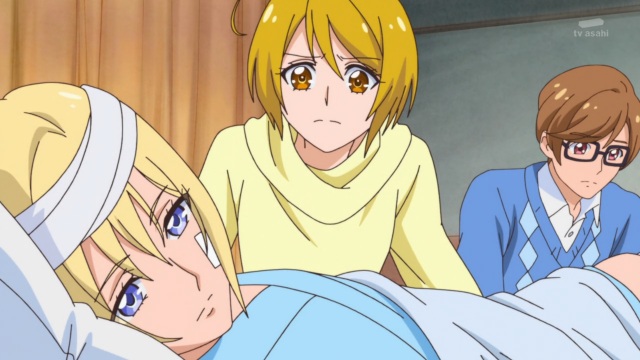 Henri ends up in hospital after being in a traffic accident

As Henri is travelling to the venue of the ice skating championship, he ends up getting caught in a traffic accident. Homare and Masato rush to his side at the hospital. However, Henri pretty much just tells them to go away. When they have left, he wallows in his own despair. 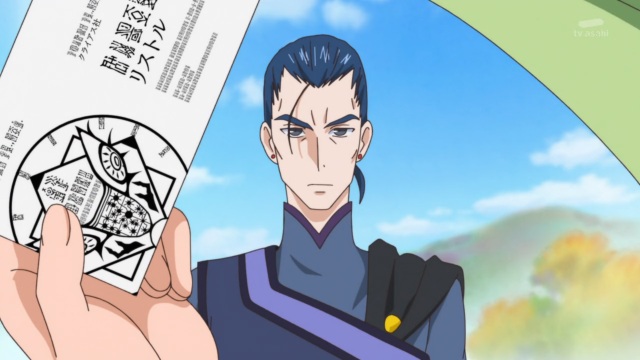 With Henri at his most vulnerable, Criasu Corp make their move. Risutol takes Henri to the ice skating venue, where the toge-power of Henri’s fans fills the air. With all that despair, Risutol summons a Wild Oshimaidaa.

Here’s our monster of the week

Risutol may have been the one to summon the Wild Oshimaidaa, but he is not the one who gives it commands. 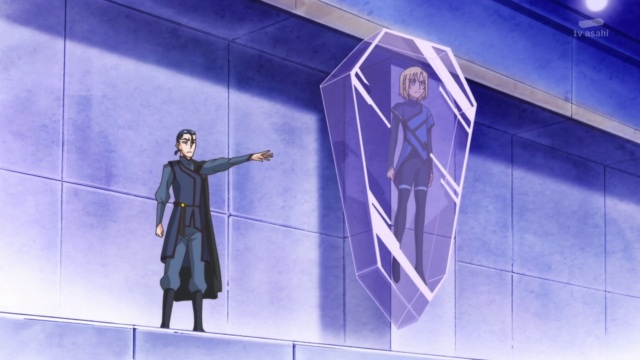 Henri commands the Wild Oshimaidaa to tear it all down. Of course, this is the cue for PreCure to do their thing. 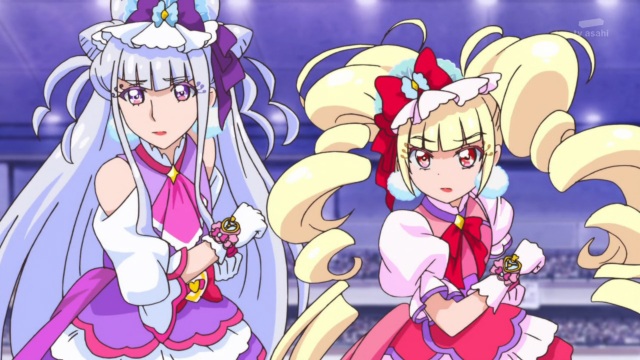 PreCure fight the Wild Oshimaidaa, whilst trying to get through to Henri. Cure Yell wants to cheer for Henri, and she asks him: what does he want to be? Henri reaches an answer, and PreCure combine the Mirai Braces and strength to bring about a miracle. 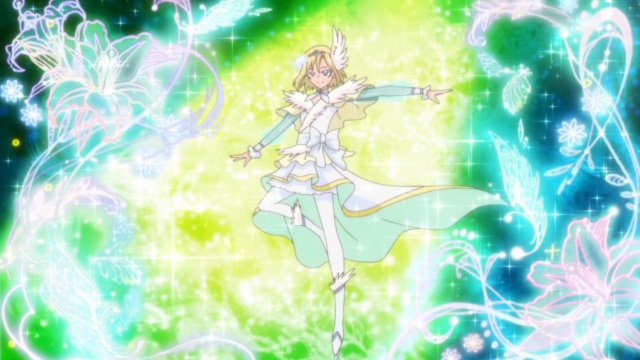 The miracle turns Henri into Cure Infini (the name he came up with himself), and allows Henri to skate one last time. The audience members who had fallen unconscious wake up (sort of), and are able to witness Henri’s skating.
PreCure finish off the monster of the week, and Henri’s miracle wears off. He happens to be in midair at the time. 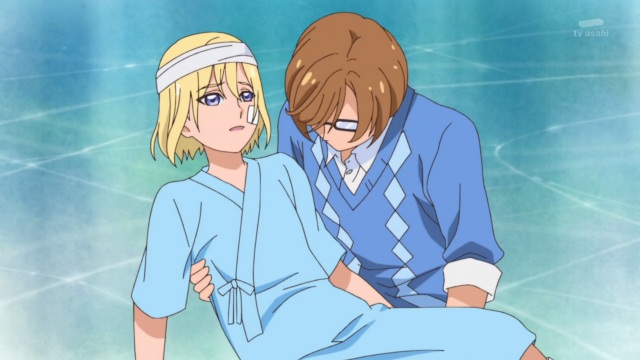 Masato rushes forward to catch Henri, which he does successfully. Henri apologises, but all Masato has to say is ‘You can do anything… you can be anything!’ 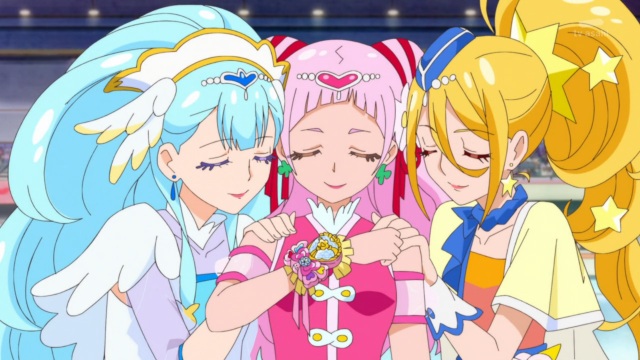 The PreCure of wings

After all that, Henri returns to the hospital. Hana, Saaya and Homare visit him, and he talks about searching for what he wants to be. That gets the girls thinking about their futures, too.
He also dubs the three the ‘PreCure of wings’ – Cure Etoile who flies through the sky, and Cure Ange the angel. Hana doesn’t think she quite fits in with that, however, Yell sounds like the French word ‘aile’, which means wings.

Huh, I guess Anima Yell is the second best cheerleading show this season.
Back on topic, this was a good episode. Seeing that slight change to opening seemed to suggest that Henri would be with Criasu Corp for longer than one episode, but that turned out not to be the case.
I’ve said this before, but seeing how far both Henri and Masato have come since their initial introductions has been excellent. They’ve definitely had a very good influence on each other.
I did feel it was a bit of a missed opportunity to not have Masato cheer along with Cure Yell during that scene, but at least they still got a decent moment after the fight was over.

I didn’t really mention it above, but is seems that Hana is still grappling with her own doubts. It was pretty neat to see Charalit turn up and give her some confidence. The reformed villains have been a very good part of Hugtto! PreCure.

Presumably that wraps up Henri’s story, and I really liked the way that things concluded. Next episode will focus on Homare – and it is close enough to the end that it could be potentially the last time I talk about Homare’s feelings for Harry. On the plus side, Cure Etoile’s fights against Bishin have been particularly good. We’ll just have to wait and see what happens next time.