A few members of Tsukikage take a trip to Okinawa in the eighth episode of Release the Spyce. It may be for a mission, but they don’t pass up the chance to do some touristy stuff. No beach volleyball, though – guess we got plenty of that from Harukan Receive. 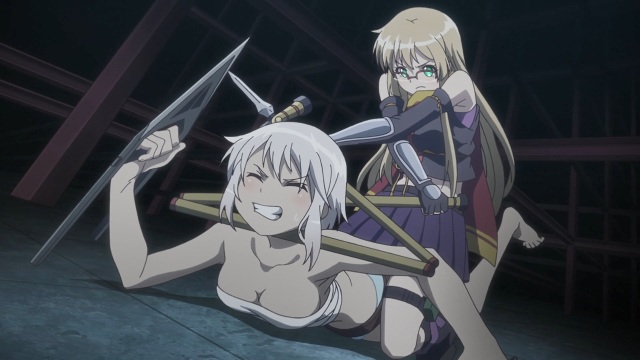 We have a rather abrupt start, with Hatsume and Theresia fighting. Theresia is trying to get information from Hatsume, but Hatsume gets the upper hand in the fight. Hatsume wins, and takes the unconscious Theresia to neutralise the poison she drank a couple of episodes ago. Hatsume asks Theresia to leave Moryo, but Theresia refuses for now.

Yuki, Momo, Fu and Goe have travelled to Okinawa for their next mission. They have three hours until they hold a meeting at a designated location with The Shisa, the local intelligence agency. Until then, they decide to just be tourists so as to not arouse suspicion. 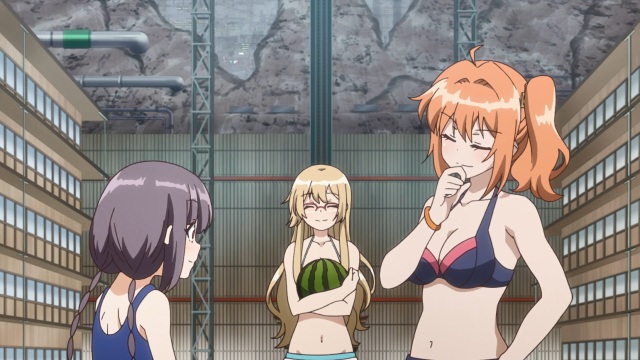 Byakko, Hatsume and Mei may not be in Okinawa, but they decide to at least get a taste of what a holiday feels like

As the Tsukikage member in Okinawa are doing their thing, they see a couple of kids playing on some nearby rocks. A snake appears and tries to attack them, but someone stops it. 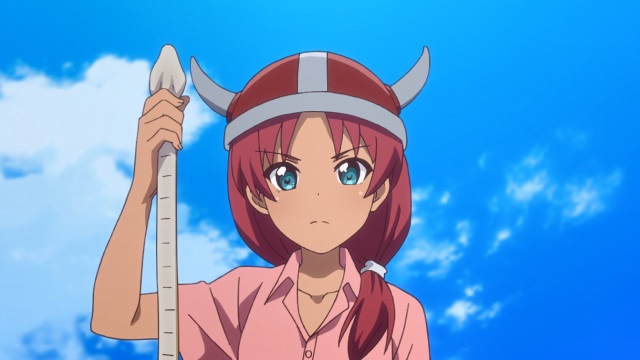 A whole bunch of snakes emerge, but the girl wearing the horned helmet pulls out a device that emits a specific sound that drives the snakes away. Fu tries to talk to the girl afterwards, but is just ignored. The Viking girl leaves, but Goe follows after her and manages to have a short conversation. Goe mentions the girl’s helmet, and the Viking girl eagerly talks about being descended from Vikings.

Tsukikage meets with the sole surviving member of The Shisa

The time to meet with The Shisa arrives, and Yuki and the others discover that all but one of them had been wiped out by an organisation called Nira Kanai. That last member asks them to rescue a hostage that Nira Kanai has – the grandfather of the Viking girl. Due to that situation, the Viking girl is working with Nira Kanai.

Yuki saves Momo from being bitten by a habu snake

During the night, a habu snake manages to make its way into the room where the Tsukikage girls are sleeping. It attempts to bite Momo, but Yuki stabs it before it can. The snake has been specially bred, which means that the girls are already being targeted.

There’s more to the selfie stick than meets the eye

Tsukikage start their mission to infiltrate Nira Kanai’s base, after receiving a few items from Hatsume. The first obstacle they have to deal with is the Viking Ingen Lua Ouka Miyaume.

Goe decides to confront Ouka, allowing the others to continue on to Nira Kanai’s base. Goe is hesitant about using her spyce, so she fights as is for the time being.

The girls almost get skewered

As Yuki, Momo and Fu sneak through the enemy base, they set off a trap that springs a load of blades from the wall. They avoid them, but then a couple of pitfall traps results in the three of them getting separated.
They still have contact over radio, so they change up their approach a little. Yuki also tells Momo to prioritise her own safety above all else.

As Goe and Ouka make their way to Nira Kanai’s base, Fu ends up stumbling upon the hostage. Yuki discovers that her spyce’s effect is lasting as long as it used to.
As for Momo, she ends up fighting the enemy leader. Ouka and Goe are able to help her deal with all of his snakes, but he appears to get the upper hand when he is able to take her sword from her.
Yuki arrives just in time to seemingly see Momo get cut down – except she didn’t, because she managed to pull out her gun before her foe could do any serious damage. Yuki slaps Momo, telling her that she should have retreated instead of fought. 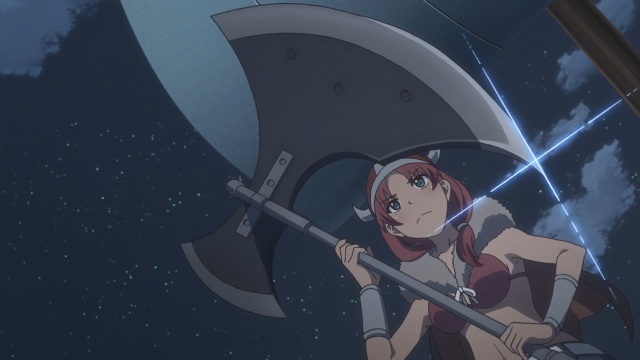 The mission draws to a close, with Ouka destroying the flamethrower that the leader turned on the base in an attempt to stop Tsukikage from gaining intel on the plants they were after. However, they were able to rescue Ouka’s grandfather, and Goe made a new friend.

First, let me say that I can’t hear ‘sata andagi’ without immediately thinking of Azumanga Daioh. With that out of the way, I quite enjoyed this episode of Release the Spyce. Vikings aren’t really a thing you see crop up often in anime, so I did quite enjoy Ouka’s character here.

Yuki may not exactly be very open with it, but judging by her reaction when she saw Momo getting hurt, she cares for her a whole lot. Presumably she fears losing her, hence why she slapped her afterwards – perhaps some past trauma related to Yuki’s previous mentor plays a part as well.

I enjoy writing, manga, anime and video games, so naturally here on my blog, you will find anime reviews, Nintendo news and other such things that I deem interesting.
View all posts by Rory →
This entry was posted in Episodic and tagged Autumn 2018 Anime, Episode 8, Episodic, Fu Sagami, Goe Ishikawa, Hatsume Aoba, Mei Yachiyo, Momo Minamoto, Release the Spyce, Spy, Yuki Hanzomon. Bookmark the permalink.