Release the Spyce Episode 5: Take Some Time for Fun

In the fifth episode of Release the Spyce, Tsukikage investigates Kyuten Science after picking up a lead previously. As that goes on, Momo struggles to balance her personal life with being a spy.

Momo’s friends text her about having a nude sleepover

The episode starts with Momo’s friends messaging her about a nude sleepover they are having. They invite Momo to hang out with them some time in the future, but she turns them down. This seems to concern Yuki a bit.
Anyways, the girls have a mission; to infiltrate Kyuten Science and search for any evidence of them being linked to Moryo.

Fu is stopped by security so they can search her bag

The girls manage to make it in no problem, and are able to carry out their mission successfully. However, they are unable to find anything that links Kyuten Science to Moryo. Yuki still has her suspicions about the place, though.

With Kyuten Science being suspected by Tsukikage, Moryo decide to put a plan into action that will divert the suspicion. We also get a proper look at what they did to Dolte.

A mentor is never far from her apprentice

Momo decides to devote herself entirely to training, as she doesn’t want to be a burden to Yuki. Several people, including Yuki herself, tell Momo that she should take some time for herself and just have some fun. 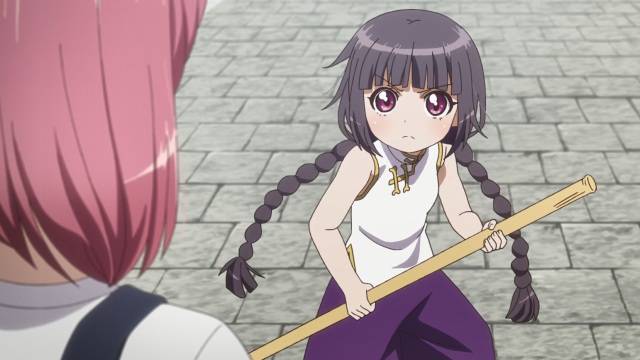 Byakko is being kept under Tsukikage’s watch

After the encounter, Tsukikage has been keeping Byakko under observation. She just wants to go back home as soon as she can, but she can only go once it has been confirmed that she is completely healthy.

The first strike decides a battle

With reports of a mysterious group selling drugs all over the city, Tsukikage investigate and track down a man named Marco Nero. Yuki and Momo follow him onto a train, where Yuki tranquilises him so that Momo can attach a transmitter and listening device on him.

When Momo finishes her task, she looks up and sees Dolte standing before her. No matter what she does, Momo’s attacks don’t have any effect on Dolte at all. Fortunately, Yuki appears, and she knocks Dolte down with a single punch. Before Dolte gets back up, Yuki tells Momo to consume some Spyce.

Yuki is able to knock Dolte from the train, allowing her and Momo to finish up the rest of their mission.
After that mission, Momo is even more obsessed with training than before. However, her friends invite her out for an early birthday celebration. Momo takes the words of everyone else to heart, and decides that she needs the break. 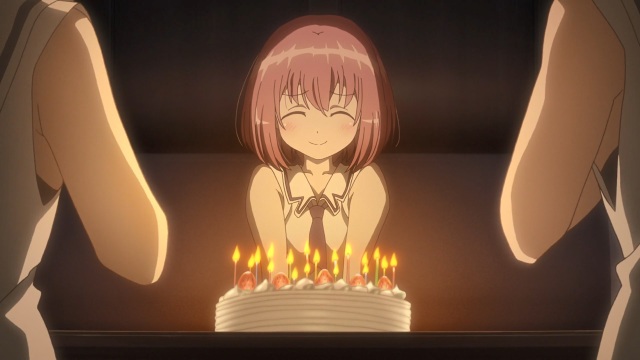 Momo celebrates her birthday (albeit one day early) with her friends

As it turns out, that break Momo takes actually helps her a great deal. When carrying out the next mission with Tsukikage, she manages to make an impressive showing when it comes to taking out a bunch of mooks.

With a whole bunch of enemies defeat, the girls talk about celebrating Momo’s birthday. They may be spies, but it is all right to celebrate happy occasions. 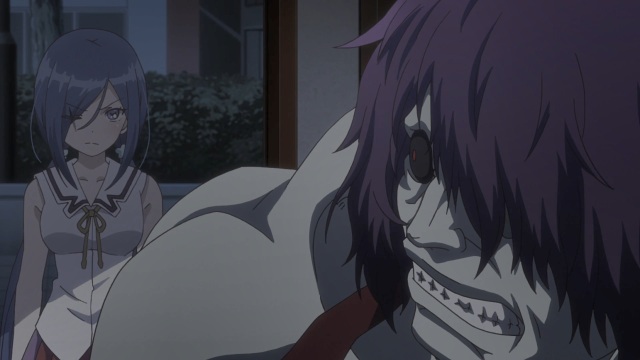 Later on, as Momo goes to head home, she finds herself confronted by Dolte once more. She gets caught off guard and sent flying, but former Tsukikage member Katrina shows off some impressive strength. Yuki arrives shortly afterwards, finishing the job. A combination of injuries and exhaustion causes Momo to fall unconscious. 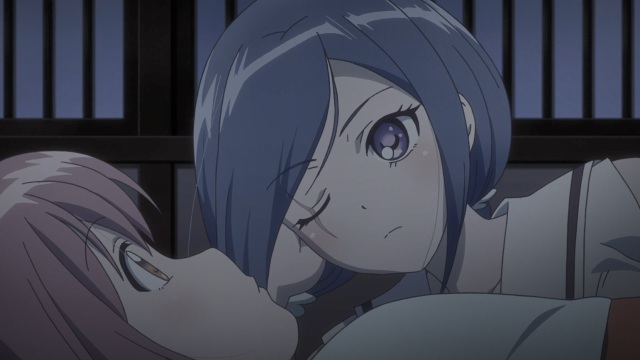 Yuki took Momo back to her house, and watched over her until she woke up. Once she has, Yuki tells Momo about the suspicions she has regarding the link between Kyuten Science and Moryo.
Afterwards, Yuki goes to practice some sword swings and Momo decides to accompany her.

Then we have a post-credits scene – Moryo has been given the identity of one of Tsukikage’s members by the traitor. We also see Tsukikage’s next opponent.

There were certainly some nice moments between Momo and Yuki in this episode. We already knew that Momo has got it bad for Yuki, but here we see Yuki showing some affection towards her apprentice. It’s quite sweet, really.
Dolte didn’t really get to stick around for long. Her defeat was somewhat anticlimactic, particularly after the build up from before. Tsukikage’s next opponent looks like they’ll put up more of a fight, though.

The traitor’s identity remains a mystery, though we can now cross one person of the list – that being the member of Tsukikage who’s identity was revealed to Moryo.
As it stands, I guess Katrina is the most likely candidate. There’s no way to know for sure at the moment, though – and the traitor could actually be a double agent. This is a show about spies after all, so I suspect things won’t be particularly straightforward.

I guess a little more could have been done with Dolte, but other than that I enjoyed this episode.

I enjoy writing, manga, anime and video games, so naturally here on my blog, you will find anime reviews, Nintendo news and other such things that I deem interesting.
View all posts by Rory →
This entry was posted in Episodic and tagged Autumn 2018 Anime, Episode 5, Episodic, Fu Sagami, Goe Ishikawa, Hatsume Aoba, Mei Yachiyo, Momo Minamoto, Release the Spyce, Spy, Yuki Hanzomon. Bookmark the permalink.

2 Responses to Release the Spyce Episode 5: Take Some Time for Fun