Happy Sugar Life is a twelve episode anime adaptation of the psychological horror manga written and illustrated by Tomiyaki Kagisora. It was directed by Keizou Kusakawa and Nobuyoshi Nagayama and written by Touko Machida. The studio that produced it was Ezo’la.
Happy Sugar Life aired during the summer 2018 season of anime, and is available to watch on Amazon Prime.

Happy Sugar Life centres on Satou Matsuzaka, a girl who has never experienced love before. However, that changes when she meets a young called Shio Koube and falls in love with her. Determined to be with her beloved, Satou resorts to any means necessary to protect her happy sugar life.

As a psychological horror anime, Happy Sugar Life has a dark tone. Unlike Magical Girl Site which front-loads practically all of its darkest moments, Happy Sugar Life maintains a consistent dark tone throughout. There are plenty of opportunities where this show will send a shiver up your spine.
This is largely in part due to having a cast of mentally unbalanced characters. You can count the number of decent, mentally stable characters on one hand. However, that’s the thing that keeps it so gripping throughout; you never know what will happen when these characters eventually end up encountering each other.

Happy Sugar Life is also pretty good when it comes to twists. Obviously highlighting them would be spoiling the show, but events may not play out like one expects. 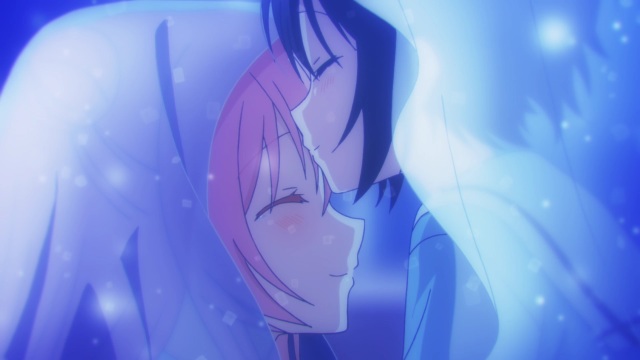 There is great chemistry between Satou and her beloved Shio. At first appearance, Shio may just seem like a child who isn’t aware of what is actually going on around her. However, as the story progresses, Shio’s character is developed further.
Quite a few of the characters have come from very dark places, and that includes Satou. It becomes quite easy to see why they act the way they do.

When it comes to the horror part, Satou provides plenty of that. She is not somebody you want to end up on the wrong side of. After all, what’s more horrifying than stern talking to? Jokes aside, if Satou needs to go beyond that to protect Shio, she will.

It is an effective horror with an interesting cast of characters, but Happy Sugar Life lets itself down in one major way. In this case, the journey is far more enjoyable than the destination. In other words, Happy Sugar Life‘s ending is a real letdown. To say more would be spoiling it, so let’s just say that the way Happy Sugar Life ends feels inconsistent with what came before.

Score: 7/10
Happy Sugar Life absolutely nails its psychological horror with Satou striving to protect her life with Shio, but the ending is a huge disappointment.

I enjoy writing, manga, anime and video games, so naturally here on my blog, you will find anime reviews, Nintendo news and other such things that I deem interesting.
View all posts by Rory →
This entry was posted in Rory's Reviews and tagged Happy Sugar Life, Psychological Horror, Rory's Reviews, Summer 2018 Anime. Bookmark the permalink.