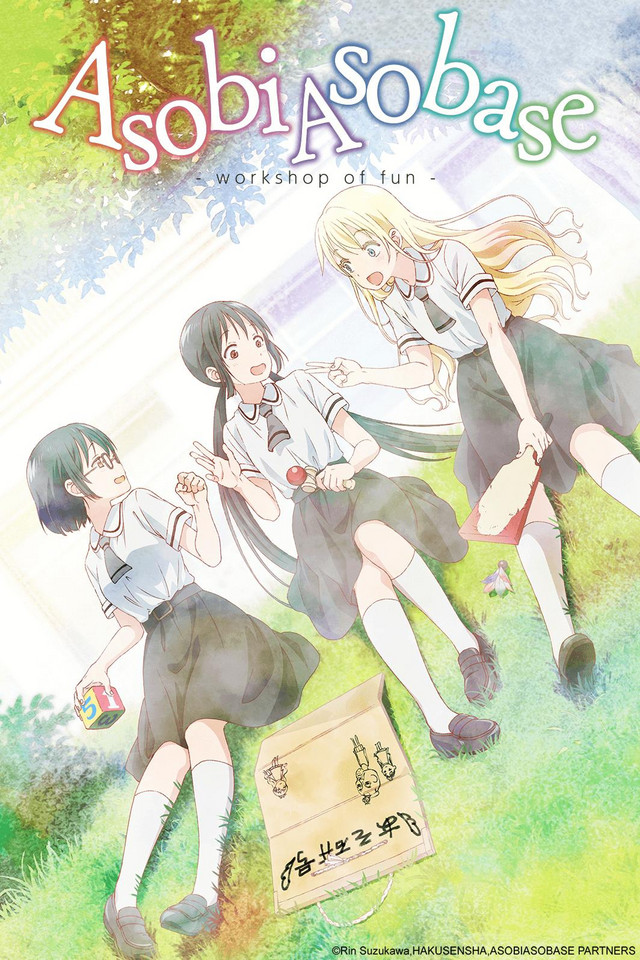 Asobi Asobase – workshop of fun – is a twelve episode anime adaptation of the manga written and illustrated by Rin Suzukawa. The director of the anime was Seiji Kishi, and it was written by Yūko Kakihara. The studio that produced it was Lerche.
Asobi Asobase aired during the summer 2018 season of anime and is available to watch on Crunchyroll.Asobi Asobase centres on the three girls who make up the Pastimers Club: Hanako Honda, Olivia and Kasumi Nomura. As part of the Pastimers Club, they participate in whatever pastimes that they can think up… except this is Asobi Asobase and it is not nearly that simple. 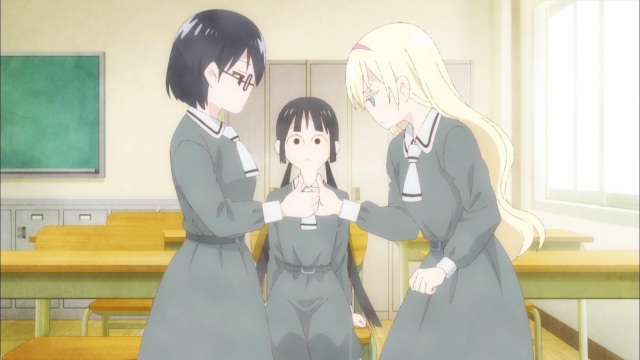 To start with, Asobi Asobase pulls of a pretty amusing bait and switch with its opening credits. Take them at face value, and you’d probably expect Asobi Asobase to be a cutesy, slice of life anime.
Then the anime starts proper, and what Asobi Asobase actually is almost defies explanation. Well, it’s a comedy, but the humour it has is very out there. It is very unpredictable where any given episode may go – and this only tends to make the whole thing funnier.
This whole thing comes full circle with the ending credits, which is far more representative of what you can expect from this show.

The Pastimers Club don’t just exclusively deal with pastimes, either. They find themselves getting involved in all sorts of frankly bizarre situations – sometimes brought on by themselves, and other times instigated by other people such as the student council president.
As with any other comedy, whether you find it funny or not will depend entirely on your own personal sense of humour. Asobi Asobase is an absurdist comedy, focusing on its three main characters more or less being jerks to each other. There are also a few gags that rely on references as well, but most of it is just bizarre.
There’s also a fair amount of screeching coming from Hanako on the odd occasion – this isn’t something you can really just watch to relax. The members of the Pastimers Club all have their own ways to react to the various situations, but Hanako is definitely the loudest about it.

Score: 8/10
Asobi Asobase – workshop of fun – is an absurdist comedy that is completely unpredictable and full of laugh out loud moments.

I enjoy writing, manga, anime and video games, so naturally here on my blog, you will find anime reviews, Nintendo news and other such things that I deem interesting.
View all posts by Rory →
This entry was posted in Rory's Reviews and tagged Asobi Asobase - workshop of fun -, Rory's Reviews, Summer 2018 Anime. Bookmark the permalink.