Rory’s Reviews: Dropkick on My Devil!

Dropkick on my Devil! is an eleven (plus one) episode comedy anime adaptation of the manga series written and illustrated by Yukiwo. The studio that produced it was Nomad, and it was directed by Hikaru Sato.
The show aired during the summer 2018 season of anime, and can be watched on Amazon Prime.Dropkick on My Devil! foregoes properly introducing its cast of characters, instead loosely establishing the premise during the opening credits. Yurine, the girl holding a chainsaw and wearing gothic lolita fashion, manages to summon the snake-girl Jashin to Earth from Hell.
Jashin wants to return home, but the only way she can do so is by killing Yurine. Jashin’s attempts on Yurine’s life often result in violent repercussions for the snake girl.
Also making up the cast are the gorgon Medusa, the minotaur Minos and fallen angel Pekola. There are a few others besides them, who are introduced as the season goes on.

When it comes down to it, Dropkick on My Devil! is effectively a slice of life anime with a dose of violent slapstick comedy thrown in as well. Whether the comedy presented is enjoyable or not will be entirely subjective – someone into slapstick comedy might not necessarily enjoy more surreal comedy.
For what it’s worth, Dropkick on My Devil! feels like its laugh out loud moments are few and far between. The rest of the time, it sits at mildly amusing at best.
Some jokes do grow a little tiresome, though. Pekola is poor, and that is pretty much the setup for every segment that focuses on the fallen angel.
The show is probably best enjoyed for what it is: dumb comedy. Thinking too hard about things such as why nobody seems to notice that Jashin is almost always topless isn’t really going to get you anywhere.
There’s also some meta humour to be found, with the characters occasionally acknowledging that they are in an anime. Also have to give the show kudos for managing to slip in an Amazon Prime advert.

The cast of characters isn’t exactly an amazing group. They all do what they need to do, but most of them just sort of exist. A notable exception to that rule would be Medusa. Medusa loves Jashin, and would pretty much do anything for her. Even when Jashin just wants her for her riches, Medusa will almost always happily go along with it.
There are a couple of segments throughout the season that focus on the relationship between Jashin and Medusa, and those are probably where Dropkick on My Devil! shines brightest. 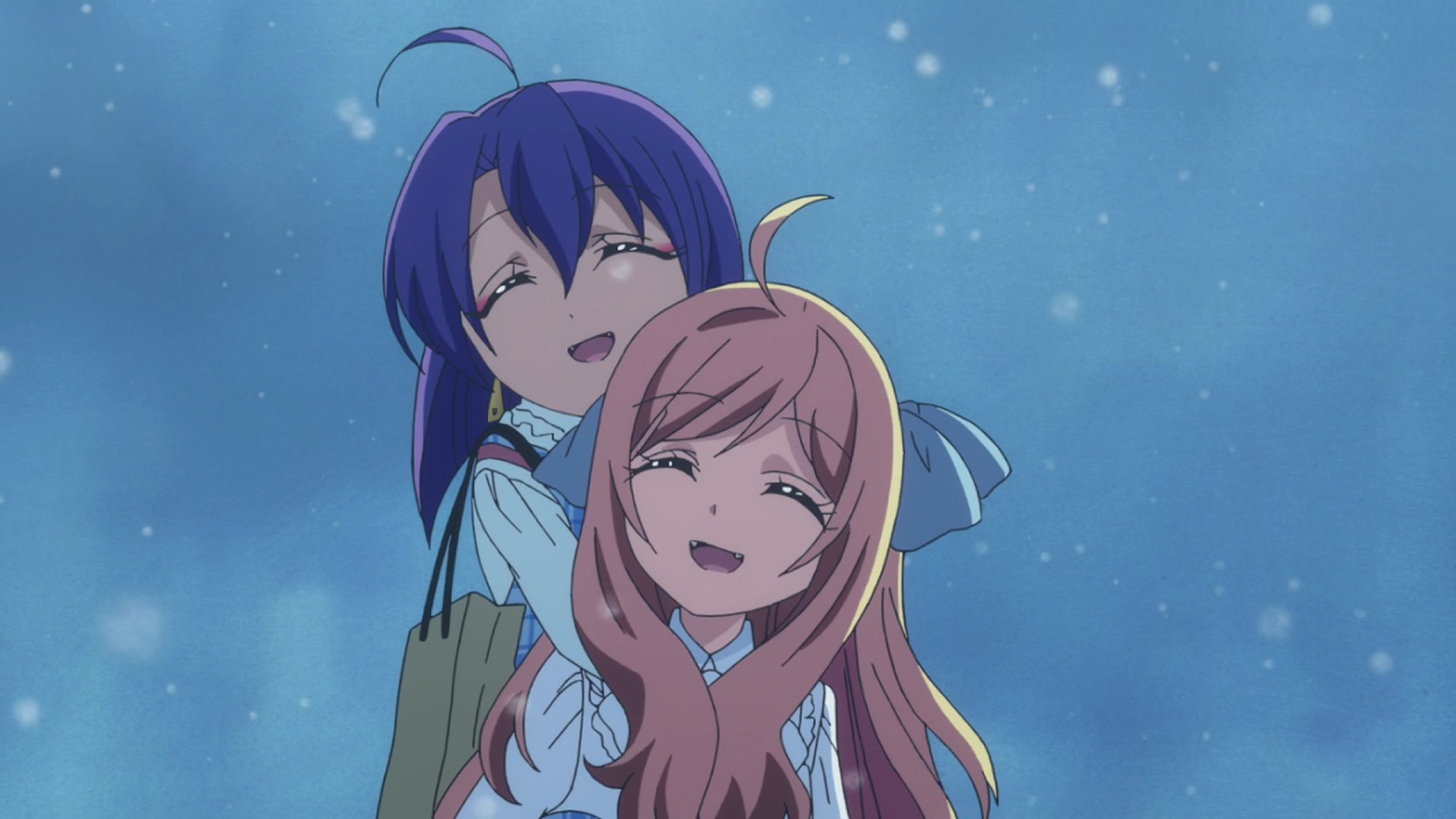 Its nice to see a bit of heart mixed in with the violent slapstick and Jashin generally just being a jerk. At times it seems like Medusa deserves much better, but seeing Jashin genuinely care for the gorgon makes things a bit better.
Whilst on the subject, there is another female character who has her eye on Jashin. She becomes obsessed with the serpent, but it’s a very one-sided thing.

Dropkick on My Devil! definitely earns points for its soundtrack – particularly noteworthy is a track that can only really be described as being played by a broken flute. An effective use of music to bring a little more humour into a scene.
There is also a particularly pleasant incidental track that you’ll hear fairly often as well – it has the perfect slice of life tone to it.
Both the opening and ending themes are upbeat, catchy tunes as well.

Score: 7/10
It doesn’t always present the best comedy, but Dropkick on My Devil! does have some genuinely good moments – Jashin caring for Medusa, that flute music and the odd laugh out loud moment. However, you also have to deal with characters that aren’t exactly compelling and tiresome running gags. There is also violent slapstick humour – that could count as a negative or positive thing depending on your outlook.

I enjoy writing, manga, anime and video games, so naturally here on my blog, you will find anime reviews, Nintendo news and other such things that I deem interesting.
View all posts by Rory →
This entry was posted in Rory's Reviews and tagged Comedy, Dropkick on My Devil!, Rory's Reviews, slice-of-life, Summer 2018 Anime. Bookmark the permalink.