The halfway point of the summer season of anime is pretty much upon us, which means it is about time for me to share my thoughts on each of the shows I have been watching. I’ll just dive right in.
HANEBADO! 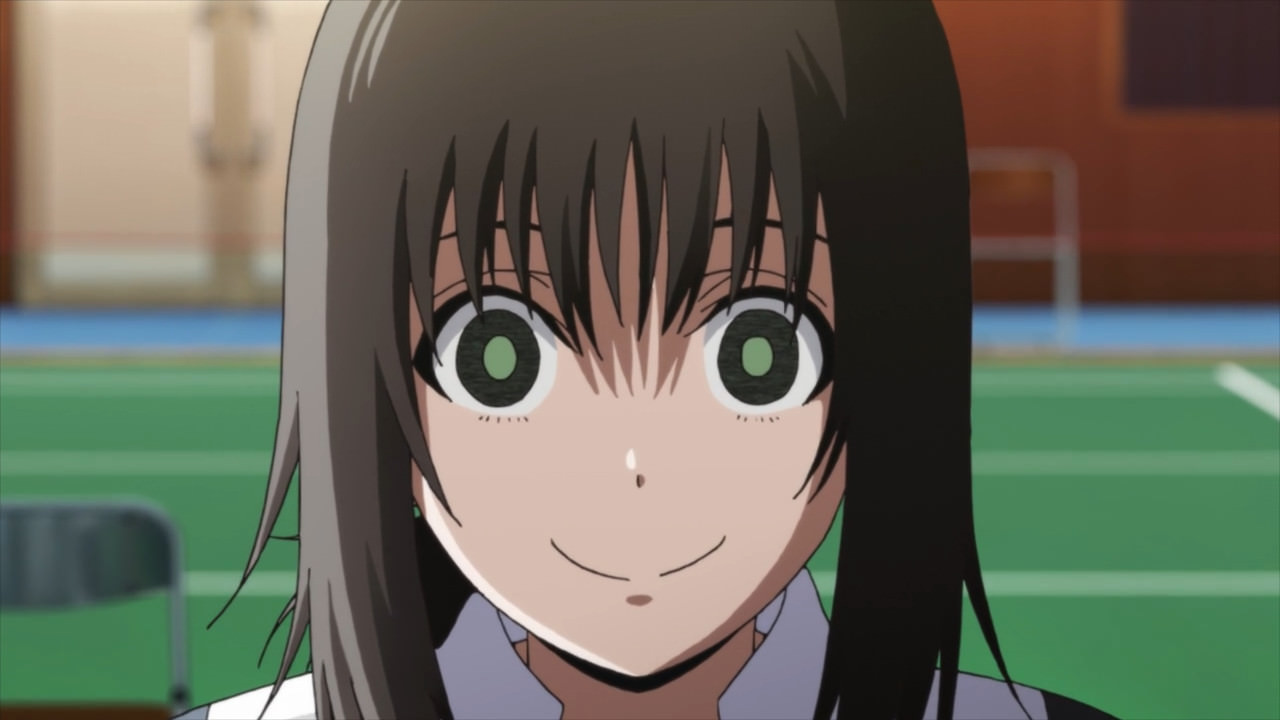 I feel like at times HANEBADO! is a little too melodramatic. It feels like almost everyone that steps onto the badminton court is not a nice person. Fortunately there are some exceptions to that rule – Nagisa being the most notable, particularly after her drama was resolved at the beginning of the season.
I can’t really bring myself to like Ayano as she is at the moment – it seems there are plenty of people who are keen on her savagery, but I am not one of them. Hopefully she will face an opponent who can get her back on the right track – preferably the aforementioned Nagisa.
I am curious about where things will end up going, and the badminton matches themselves are actually fairly enjoyable to watch. 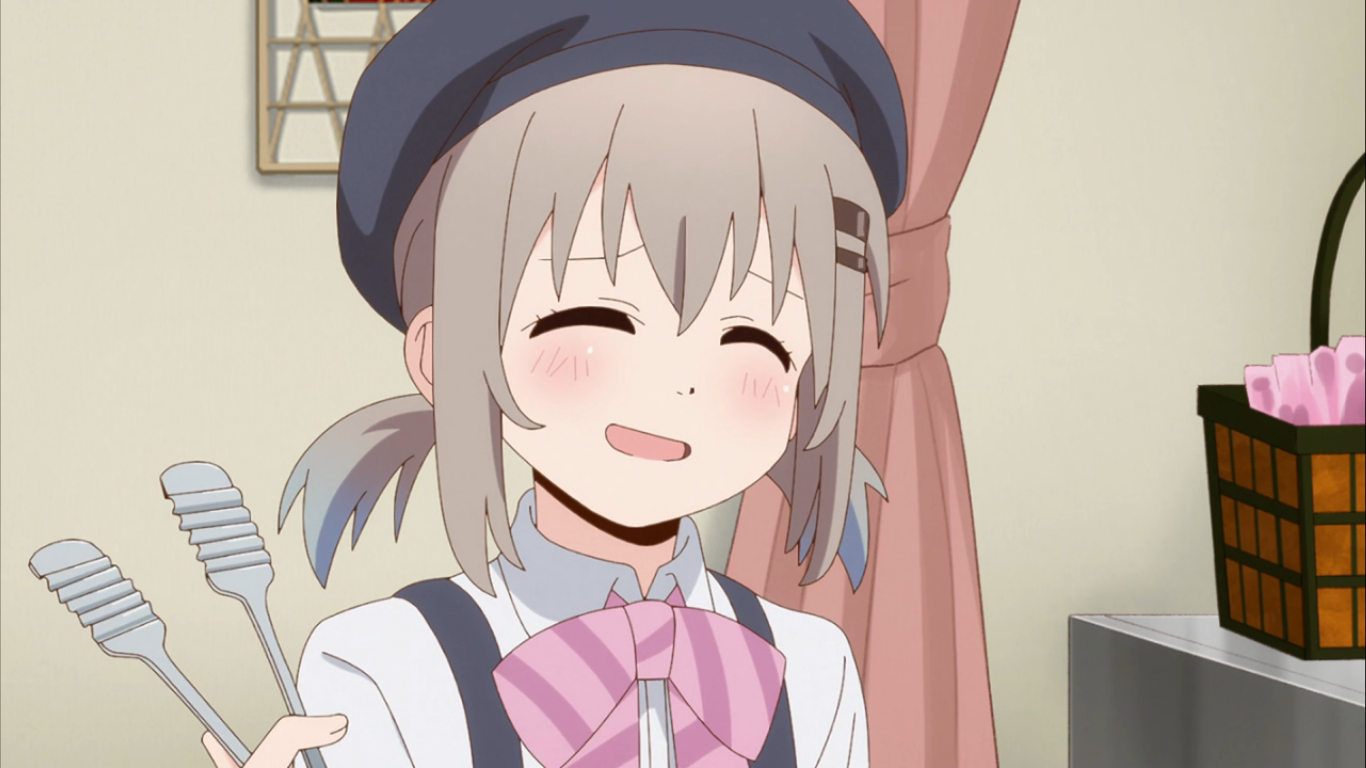 Encouragement of Climb is as pleasingly pleasant as ever, and the most recent episode at time of writing showed us just how much Hinata adores Aoi. It would have been nice to see both of them together again, but Aoi had work.

Out of the comedies I am watching this season, Chio’s School Road is fighting Asobi Asobase for the position of my favourite. Chio is a fun character, and her interactions with her friend Manana are great – sometimes they are supporting each other, and other times they will not hesitate to throw each other under the bus.
Another character, Madoka Kushitori, seems to have been met with quite a mixed reaction. Honestly I tend to find her appearances rather amusing, but I can see why she won’t appeal to everyone.

Unlike HANEBADO!, I feel like most of the characters are actually enjoying themselves whilst playing their sport – in this case beach volleyball. As such, I am enjoying Harukana Receive more than HANEBADO!. Probably helps that the volleyball teams pair up very neatly into yuri couples as well…
Whatever it is, I am having fun watching this – which is not something I can really say about HANEBADO!.

I’m so glad I decided to pick up the first volume of the Cells at Work! manga from Comic Con a few years ago – I absolutely enjoyed reading it, and seeing the manga brought to life as an anime has been very pleasing for me. The character designs are amazing, and the show is educational at the same time.
Cells at Work! is an absolute blast, and lives up to my expectations as a reader of the original manga.

This could have just been yet another idol anime, but the first episode gave us a fairly interesting twist with lead character Hanako. From then on, I have had fun watching Music Girls. The main cast are pretty good for the most part – maybe Uori needs to be less harsh towards Hanako – and the side characters get some pretty amusing moments as well. Case in point: Miku’s meat rival, and their inner 17 year old girl.

Every week, I feel like I go between Chio’s School Road and Asobi Asobase as my favourite comedy of the season. Both shows generally have me in stitches when I watch them. Asobi Asobase pretty much revels in a stupid sense of humour, which I love. It gets pretty dumb at times, which only makes it all the funnier.

Dropkick on My Devil!

Taking third place in terms of comedies for me is Dropkick on My Devil!, where violent slapstick tends to be its preferred form of humour. There are times when it does get a good laugh out of me – episode 5 effectively had an advert for Amazon, which is pretty amusing when you consider this show streams on Amazon Prime. The moment in the screenshot above was good as well.
I’m mostly watching this for Medusa. Medusa is way too good for Jashin, but she loves her anyway.

Twisted is a word that comes to mind when I think of Happy Sugar Life. Almost everyone seems to have some kind of dark secret that is just waiting to come out, and it won’t be pretty when said secrets are revealed. The way things are going, it seems like Satou’s happy sugar life is going to get harder and harder to protect. I am certainly very interested in seeing how everything will end up playing out.
Shio still remains as adorable as ever.

This show is incredible. The highlights are the stage fights, and Mahiru’s one in the most recent episode at the time of writing was particularly entertaining. Revue Starlight has also shown that it doesn’t always need the stage fights to settle character drama though – episode 4 is an example of that, focusing on Karen and Hikari.
Whilst the girls are gunning for position zero, we have yet to see what exactly that entails – I’m going to guess there will be a bit more to it than playing a lead role. After all, there must have been a reason that Hikari was trying so hard to keep Karen away from the auditions at first.

Forget about the Titans, season 3 of Attack on Titan has humans as the enemy. It also delves more into politics, which marks quite a change from what came before. I’ve been keeping up with the manga, though it was a little while ago since I read the chapters covered in the third season so far. Still, you can probably guess that it is not a happy future the characters are headed towards here.

The latest episodes of My Hero Academia give the characters a chance to show how their training in previous episodes paid off, as they fight to pass an exam. This has proven to be fairly enjoyable, and seeing the characters use their Quirks in new ways has kept things interesting.

After giving us an action sequence that rivals some of the best fights in Naruto and Naruto Shippuden, BORUTO: NARUTO NEXT GENERATIONS is currently in the middle of an arc that focuses on Cho-Cho. It’s not all that great, to be honest. That screenshot of Boruto pretty much sums up my thoughts on the current arc.

Still on Whole Cake Island, though things are moving towards the end of this arc. Pedro got his moment to shine the most recent episode, and it was quite a spectacular event. It also means that the show is just one step closer to giving us the climactic battle of the arc.
We did have a fair few episodes in a row of characters just running, and Big Mom saying nothing but ‘wedding cake’ has already grown tiresome. Honestly, with the pace that the anime is going, One Piece fans might just be better of sticking with the manga.

Currently, Hugtto! PreCure is at a sort of lull. The most recent episodes have been decent enough, but I expect there will be quite a surge in quality when the plot kicks in proper again. Still, it has been giving us plenty more EmiRuru, so I’m happy with it.

Aikatsu Friends! is great. I’ve been enjoying this a lot – that comes down to the Friends units pairing up very neatly into yuri couples. Aine and Mio are the biggest example of that, but they are lead characters. Honey Cat and Love Me Tear certainly aren’t far behind, either.
Honey Cat were the stars of the most recent episode, and sure it enough it delivered some nice moments between Ema and Maika. 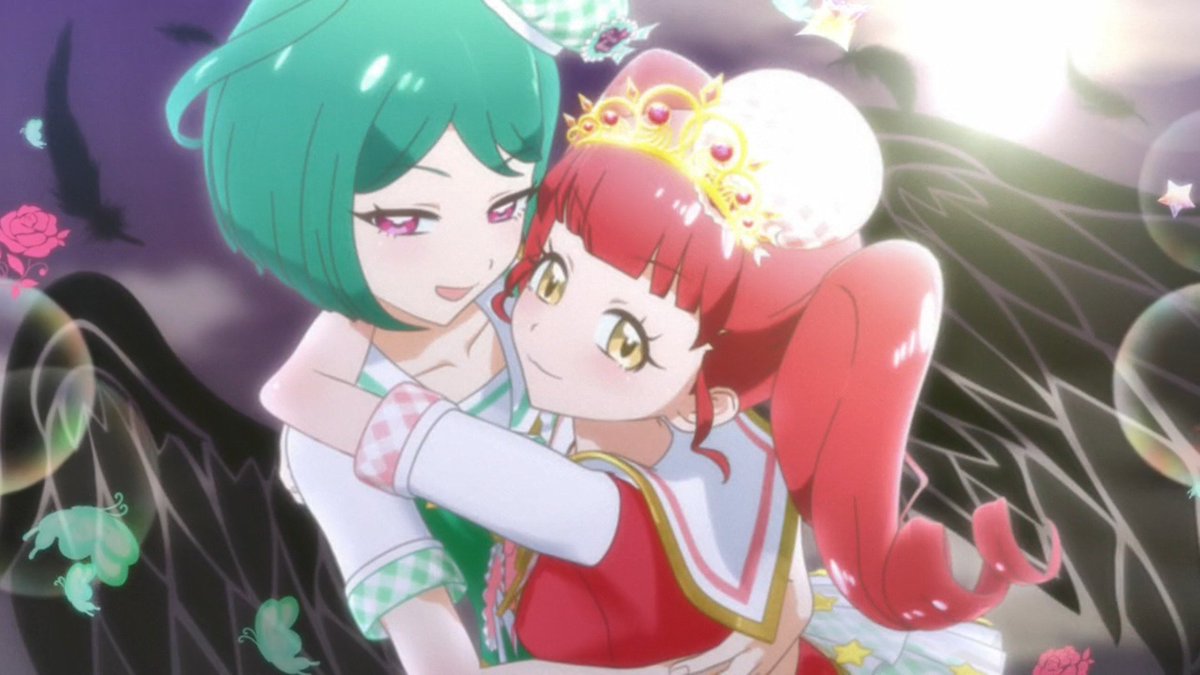 My viewing of Kiratto Pri☆Chan has been more sporadic than everything else on this list, due to having to wait for quality subs. I’m perfectly fine with waiting, though.
As for the show itself, I first thought of Anna Akagi’s rivalry with Emo Moegi as something that was mildly amusing. However, Anna has started growing on me more recently, particularly after Meltic StAr’s comeback. She is also close to fellow Meltic StAr member Sara, as you can see in the screenshot above.
I have enjoyed what I have watched of this so far, though not as much as Hugtto! PreCure and Aikatsu Friends!. Still, a fun little show.

That covers everything I am watching this season. My top picks at the halfway point of this season are Cells at Work!, Harukana Receive, Revue Starlight, Chio’s School Road and Asobi Asobase – workshop of fun –.
That’s just for the anime that started airing at the beginning of this season – include ones that premiered in previous seasons, and Hugtto! PreCure and Aikatsu Friends! make the list as well.

Whilst there has been some rather overly dramatic shows this season, summer has been mostly been a whole lot of fun. I eagerly anticipate what the second half has in store, and then we’ll be getting into autumn season of anime which has a lot be hyped for – but I’ll talk about that stuff closer to the time.