Remember Saaya? She hasn’t really had a lot to do in recent episodes of Hugtto! PreCure, but episode 26 shines the spotlight on her – and it is well deserved. Saaya’s mother also plays a prominent role in this episode.

Let’s all get fizzy with Saaya

An advert for Angel Fizzy Mineral Water starring Saaya airs in this episode, and she gains quite a following due to it.

Even Ruru wants to get fizzy with Saaya

With the popularity of the advert, Saaya finds herself mobbed by fans who want to shake her hand and get autographs.

Everyone gets together after that, and Hana realises that she is the only one that doesn’t really know what she wants to do. Saaya has acting, Homare has figure skating, Emiru has her guitar and Ruru has her… ‘android-ness’. I’m not sure that last one exactly counts, though.
However, Saaya is actually undecided on becoming an actress. She wants to hear what her mother thinks about it. When she says that, Ruru suggests that they go and ask her directly.

Saaya and the others go to a TV studio, where they are greeted by Saaya’s Dad. He has made lunch for Reira – Saaya’s mother – and he has some business at the studio as well. As such, he takes them into the studio to meet with Reira.

Inside the studio, Hana is pretty eager to get the autographs of any celebrities she may come across. Ranze appears when she hears the word celebrity, and gives Hana multiple copies of her autograph. Ranze then goes on to upset Hugtan. 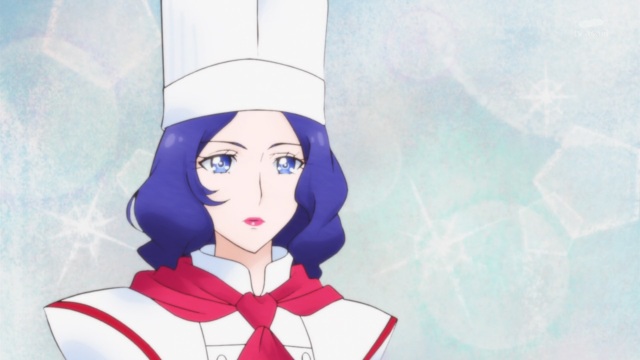 Reira arrives, and she is quickly able to calm Hugtan. Both Saaya and Ranze apologise for causing a disturbance, but Reira assures them that it’s fine. Harry decides to go for a walk with Hugtan so they don’t interrupt any more.

Hana, Saaya and Homare watch as Reira, Ranze and the other actors film a scene. Reira eats a raw leek and manages to maintain her composure – until the scene is finished at least. Eating the leek was an ad lib, simply because she felt that was what her character would do.

Saaya talks to Reira during her break

When the lunch break arrives, Saaya approaches Reira and asks if she has been causing any trouble for her. Reira responds with a question: are you prepared to face the people who accuse you of getting roles because you are the daughter of Reira Yakushiji?
Saaya doesn’t have an answer for that. 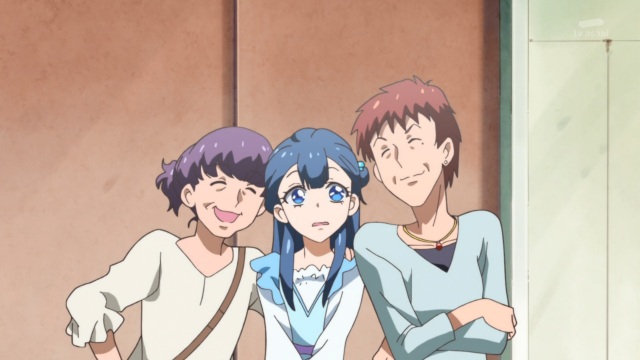 Saaya meets some people who knew her as a baby

Following that, Saaya ends up meeting some old folks who know her. She spent a lot of time at the studio as a baby, and they helped to look after her. 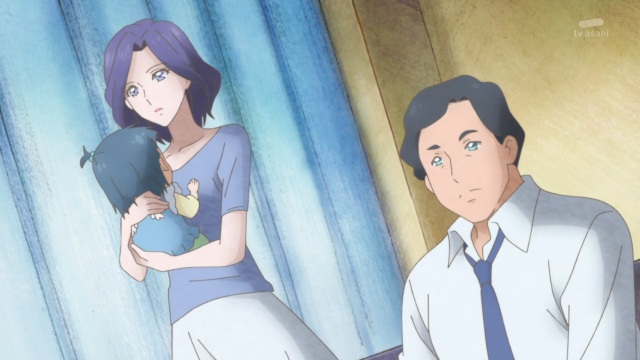 The old folk reminisce back to when Saaya was a baby, and how hard Reira worked. They helped out in order to support Reira’s family in any way they could. Back to the present, they suggest that Saaya’s Dad takes them to see just how hard Reira works.

Reira puts in a lot of effort behind the scenes

Despite playing a character who is renowned for her cooking skill, Reira isn’t actually able to cook very well. It is Saaya’s Dad who takes care of that, and the very reason he was at the TV studio.
Seeing Reira practicing her cookery behind the scenes reminds Saaya that her mother is awkward at times, but always worked hard. She would always cheer her on when she was on television. Saaya has always wanted to see the world behind her.

Ranze is still bitter about her previous experience with leeks, and that generates enough toge-power for Gelos to bring forth a Wild Oshimaidaa. The studio crew all fall unconscious, including Reira.

Cure Ange slams the Wild Oshimaidaa into the ground

Ange is able to attack the Wild Oshimaidaa, leaving it open for Cure Amour and Cure Ma Cherie to finish off.
With the enemy defeated and everyone regaining conscious, it is time to eat. Saaya has also reached a decision about something, which she tells her Mum.

Saaya wants to act alongside Reira

Though Saaya hasn’t made the decision to become an actress just yet, she does know that she wants to act alongside Reira at least once.

That brings this episode to an end, and I enjoyed it. It was a nice warm and fuzzy episode, which gave Saaya some much needed time in the spotlight. I think Cure Etoile said it best: ‘Ange is pretty cool too, isn’t she?’.
There isn’t much more for me to add here; Saaya has a good relationship with her parents, and this episode showed us that.

Hugtto! PreCure will be on a break next week, but it will be back the week after.