Katana Maidens ~ Toji No Miko is a Japanese media franchise. The focus of this review will be the 24-episode anime series, which was produced by Studio Gokumi. The director was Koudai Kakimoto, and it was written by Tatsuya Takahashi.
The anime aired during the winter and spring seasons of 2018, and is available to watch on Crunchyroll.Katana Maidens ~ Toji No Miko focuses on a group of girls known as ‘Toji’. Toji wield swords, and it is their duty to exorcise monsters known as aradama.

Of course, the Toji do fight against the aradama during the show, but they also clash with other Toji for a variety of reasons.

Katana Maidens doesn’t really waste any time towards the beginning – it pretty much jumps into the action straight away with a sword fighting tournament, and than a major event happens there. It goes on to have big reveals that you might expect to find towards the end of a season, and that’s pretty much just in the first quarter.
Oddly enough, it kind of relaxes its pacing for the second half of the show. After its mid-season climax, Katana Maidens makes the effort to establish the plot more properly before the Toji are thrust back into action.

With 24 episodes, Katana Maidens has ample opportunity to establish its characters. Fortunately, that it is exactly what it does, and it does it pretty effectively as well. Whether its interactions between the main cast, or shedding some light on the antagonists, Katana Maidens is full of interesting characters.
Most notable is Yume, pictured above. Her introduction gives the impression that she is the typical sort that absolutely loves battle (similar to Bleach‘s Kenpachi Zaraki in a sense), but she receives more development as the show goes on. In fact, Yume was very much elevated up to fan favourite status as the show revealed more about her.
There are a few characters in the first half who are only their to be obstacles to be overcome. Come the second half, though, and they get their turn in the spotlight to receive character development and become much more compelling characters.
Not all of the characters are likeable, though. Admittedly, there are a select few who are written purposefully to be despicable, though their actions don’t go unanswered.
In the second half, a character called Ayumu is introduced. She doesn’t really do much in the grand scheme of things, and probably won’t be remembered as fondly as most of the other characters.

A key part of Katana Maidens ~ Toji No Miko are the sword fights. The Toji carry swords around; you’re going to expect them to use them. Fortunately, they don’t disappoint in that regard.
Fights are more often than not one-on-one affairs, and the Toji employ various techniques during battle. The most commonly used is utsushi – this technique allows the Toji to stab and cut each other without any physical damage to their bodies. It functions as a protective measure, and manifests as a slight grow around the characters.
Some might say that the utsushi technique makes battle feel like they have less impact, as there is less at risk. However, that means fights where blood is actually drawn have more impact. 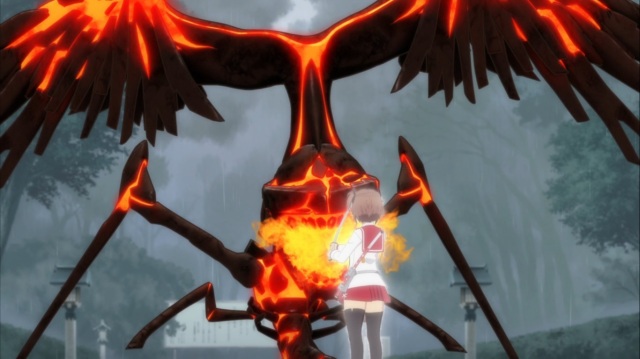 If the Toji are not fighting each other, than they are probably fighting aradama. These monstrous beings tend to be animated with CG. In fact, the sword fights themselves tend to be in CG – unless they aren’t.
Fights in the first half are animated with CG, but that changes during the second half. It becomes a little inconsistent later on, with one fight being traditionally animated before switching back to CG for the next one.
Still, the animation does a decent job at conveying the fights.
Another notable thing about the fights is that they are never dragged out. They are quick, sharp and to the point – much like a Toji’s okatana.

The blades that the Toji wield aren’t just any old swords. They are called okatana, and are pretty much the only weapons that are truly effective for fighting aradama. Each okatana has its own name, though that is only really important for the two lead characters, Kanami and Hiyori.

Kanami is very much a sword fighting nerd – or that’s how Kaoru puts it, anyway. She is obsessed with sword fighting, and also happens to be very good at it. During battle, she is able to analyse her opponents movements, and she is familiar with many different styles.
Whilst Kanami is the cheerful and energetic type, Hiyori is more stoic. She has a serious personality, as well as a strong sense of duty.
The central cast of characters all get their own turn in the spotlight, and a lot of that comes with their interactions with each other. They make up a very interesting group, and there are even some unexpected friendships formed within that group.

As tends to be the case with shows that feature a large cast of female characters, there is plenty of potential here for yuri shippers. After all, there are enough characters for the central cast to pair off very nicely. The supporting cast also get in on that as well, though that is more prevalent in the second half of the season.

The two leads, Kanami and Hiyori, develop a fairly close relationship over the course of the anime. Mai is instrumental in helping an otherwise emotionless girl actually feel emotions, and there are two members of Yukari Origami’s elite guard that are well worth keeping an eye on.

When it first aired, Katana Maidens ~ Toji No Miko gave the impression that it was just going to be yet another girls’ battle anime, similar to the likes of Battle Girl High School or Schoolgirl Strikers.
However, it proved itself to be so much more with strong character development, fast-paced action and surprising twists in its plot.

Score: 9/10
Katana Maidens ~ Toji No Miko has great action scenes, brilliant character development and memorable twists. That all comes together in a single package that is a lot of fun to watch.

I enjoy writing, manga, anime and video games, so naturally here on my blog, you will find anime reviews, Nintendo news and other such things that I deem interesting.
View all posts by Rory →
This entry was posted in Rory's Reviews and tagged Action, Fantasy, Katana Maidens ~ Toji No Miko, Rory's Reviews, Spring 2018 Anime, Studio Gokumi. Bookmark the permalink.