Figured I would sneak this one a couple of days before Nintendo’s E3 Direct, as I imagine that’s where the attention of most Nintendo fans will be directed once it airs. Actually, the game I want to feature here is one that was announced during last year’s E3. It was originally going to be a 3DS exclusive title, but it was released for both 3DS and Nintendo Switch in the end.
Before I focus on that, though, I’ll also mention a few other games that I have been playing.

Last month saw the release of Hyrule Warriors: Definitive Edition, and you can bet I am still playing it. I’m currently working my way through the Adventure Mode maps in order to unlock more weapons for the characters. I’ve got all the weapons from the Adventure and The Wind Waker maps. Currently I’m working my way through the Master Quest map, where the majority of the level 3 weapons are.
After collecting the weapons, I intend to go back to the story mode and pick up the Heart Containers and Gold Skulltulas I have yet to collect, and I guess it’ll be a case of getting 100% on each of the Adventure maps after that.
There’s also the Challenge mode to tackle, so there is plenty in this game to keep my occupied.

I have also been playing Bloodstained: Curse of the Moon, which is a very good classic Castlevania game.
All right, it’s not a Castlevania game, but it was created by Koji Igarashi – the man who gave us Castlevania. You can really feel his influence, as this game plays and looks just like the NES Castlevania games.
You control a character called Zangetsu, but unlock three others as you go through the game. My favourite to play as is Miriam, with her whip and sliding technique. Miriam is also the main character of the upcoming Bloodstained: Ritual of the Night, which is another game I am looking forward to. Whilst Curse of the Moon is Classicvania, I imagine that Ritual of the Night is more Metroidvania.

Of course, there has been one other game that I have been playing this month as well, and that is the one I want to focus on as my Game of the Month.

In the world of Sushi Striker: The Way of Sushido, the world was torn apart by war. The war happened because of a specific food: sushi. This war became known as the Sushi Struggles, and the Empire outlawed sushi.
The Republic fights to allow everyone to freely enjoy sushi. You play as a character called Musashi, who lost their parents during the Sushi Struggles.

You can choose to play as either male or female Musashi

In order to fight against the Empire, Musashi has to eat plenty of sushi. This is where the gameplay comes in: during sushi battles, you have to match plates of the same colour. Your opponent will be doing the same as well. As you eat sushi, the plates will pile up. However, you only have seven seconds to match as many plates as you can, so you have to think fast. 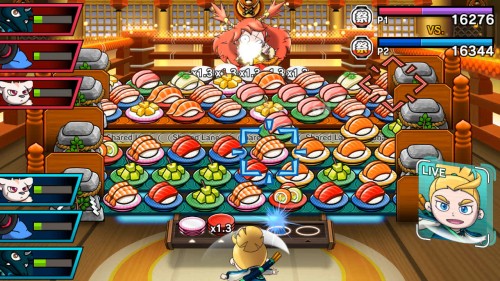 The plates can be used to attack your opponent by flinging them. The idea is to eat enough sushi to create large stacks of plates, and fling them at your opponent to wear down their HP.
Sushi Strikers don’t battle alone. During their journey, Musashi will happen upon Sushi Sprites. 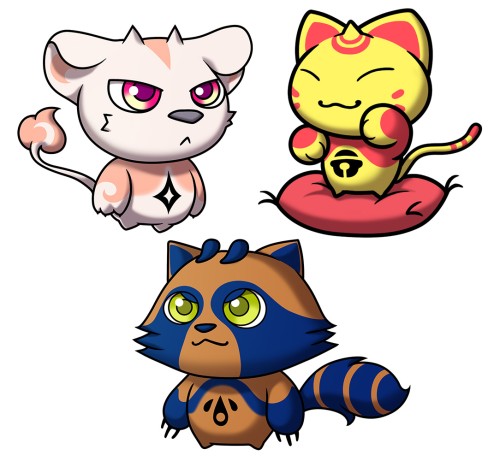 This adds an element of ‘gotta catch ’em all’ to the game, with each Sushi Sprite providing different abilities to use in battle. Jinrai, the first Sushi Sprite Musashi pledges with, can make all plates on the conveyor belt turn the same colour. There are also offensive and defensive abilities, and with the ability to take three different Sushi Sprites into battle you can mix and match abilities to suit the way you like to play.
It seems that Sushi Sprites also have the ability to change forms, or perhaps ‘evolve’ might be a more fitting term.
It’s not just Sushi Sprites that can help you during battles. You will pick up a variety items. Some change the speed at which the conveyor belts move, whilst others may end up earning you new Sushi Sprites.

There is a single player story to play through, but you are also able to take your Sushi Striker skills online as well. I haven’t really dabbled in that yet, so I don’t have much to say about it at the moment.

Sushi Striker: The Way of Sushido has some excellent production values. There are full-on anime cutscenes interspersed throughout the story, and they all look great.

I am having a lot of fun with Sushi Striker: The Way of Sushido, and it keeps pulling back for one more go. If you are unsure whether that this game is your thing, you can find a demo for it on the Switch’s eShop. It barely scratches the surface of the game itself, but it does give you a good idea of what the gameplay is like.

As an aside, I could totally see Musashi (both male and female versions) making it into the upcoming Super Smash Bros. game. Guess we’ll find out soon enough…maybe.

All right, I’ve said my piece now, but I do want to end this post with a couple of hints about what you can expect from me for this month. I’ve brought a couple of games that I will be unboxing. One of them is a crossover fighting game, whilst the other is the eighth title in a series I’ve never experienced before.
Both are due towards the end of the month, so expect to see those unboxing posts around then.

I enjoy writing, manga, anime and video games, so naturally here on my blog, you will find anime reviews, Nintendo news and other such things that I deem interesting.
View all posts by Rory →
This entry was posted in Games of the Month and tagged Action, Bloodstained: Curse of the Moon, eShop, Game of the Month, Hyrule Warriors: Definitive Edition, indieszero, June 2018, Nintendo, Nintendo 3DS, Nintendo EPD, Nintendo Switch, puzzle, Street Fighter: 30th Anniversary Collection, Sushi Striker: The Way of Sushido. Bookmark the permalink.