In episode 7 of Magical Girl Site, Aya asked for a favour from the other magical girls she had recently met. Episode 8 reveals just what that favour was, as well as the reason for it.

The magical girls go to the beach

So the favour that Aya asked for last time was a group trip to the beach. She just wanted to have some fun, especially as magical girls only have limited time. Also, Tsuyuno mentioned in the previous episode that she wanted to visit a beach. 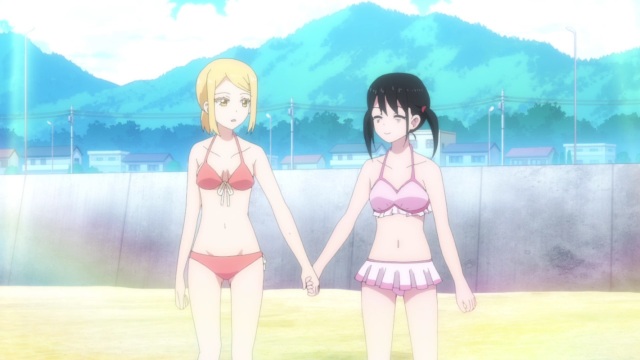 Aya wants to have fun with Tsuyuno

Here’s a shot of Sayuki, as you can’t really see her in the group shot

The girls manage to put aside their differences – this even includes Rina and Nijimi – in order to just spend the day having fun.

Aya and Tsuyuno being happy together is a very good thing

Kiyoharu talks with Kosame, and reveals that his telepathic connections to other magical girls have steadily been disappearing.
Whilst that happens, someone shady approaches the girls’ lockers…

This whole parasailing scene is very good, too

Aya decides that she and Tsuyuno should go parasailing together, because it will make for good memories. Tsuyuno doesn’t seem too keen on the idea at first, but when Aya encourages her to look up, he is treated to a spectacular view of the ocean.
It is soon revealed why Aya has arranged all of this; Tsuyuno has very little time left to live. That was what Kosame told her during their phone call at the end of the previous episode, hence the urge to make good memories.
Despite knowing this, Aya makes Tsuyuno promise that they will both come back to the beach together again.

The girls return to the lockers after that, and they discover that Nijimi’s wand has been stolen. Tsuyuno brought the panties along with her for their beach trip, but now they have vanished. Kiyoharu is able to determine that all the magical girls gathered are innocent, so it was the work of an outsider.
Nijimi has an inkling as to who was responsible, though.

Kaname took the wand, and he puts it to use when the ‘personification of AniTwitter’ confronts him about defiling ‘his Nijimin’. I’m not going to go into detail here, as this is a scene I would rather have scrubbed from my mind.
In summary: Kaname uses Nijimi’s wand to force Keisuke to kill himself, but only after giving him a lengthy speech about how he his scum.

Aya witnessed everything that Kaname did

Whilst out searching for Nijimi’s wand, Aya happens to witness Kaname using it for himself. She ducks out of sight, and then leaves when Tsuyuno and Rina find her. When she looks back, this is the sight she is met with:

Well, this is incredibly creepy

Aya decides to keep very quiet about what she just witnessed, as she is afraid that the other magical girls will end up killing Kaname if they find out.
Unfortunately for her, Kiyoharu is able to read minds. After learning that from Aya, Kiyoharu ponders what their next move should be. 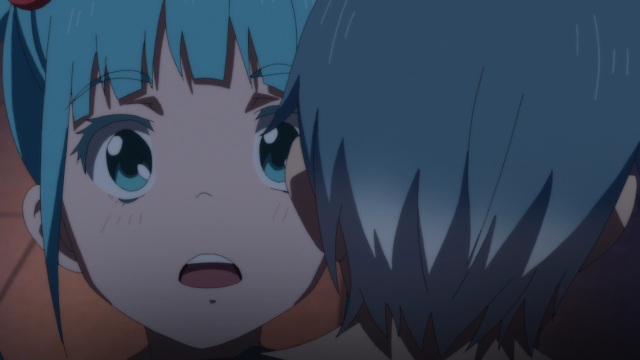 The girls return to their respective homes, and Nijimi finds Kaname waiting for her. She thinks that he will return her wand to her, but he has other plans…

Apparently Nana has been working hard – it sure looks like it…

Next, we see a meeting between the site administrators. Oh, before we go any further, here’s something I completely forgot to mention. 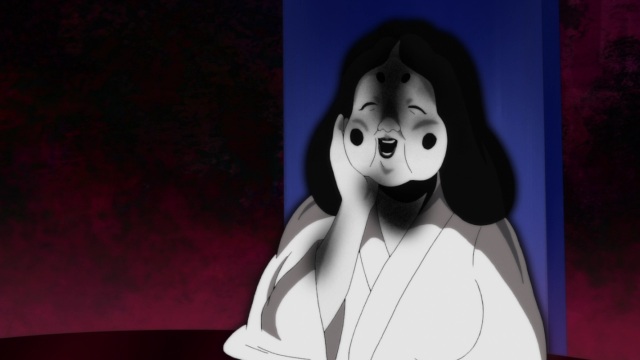 Yep, the Virtual YouTuber, Ai Kizuna (huh, it’s kind of weird seeing her name in Western order), is the voice the site administrator with the noh mask.

That brings this episode to an end, with the Tempest drawing ever closer. This episode adapted chapters 32, 33 and half of 34.
For those keeping up with these posts, you’ll probably realise that some chapters of the manga have been skipped. I won’t say what happened in them, since I reckon the anime is just shifting events around and I don’t want to spoil anything.

Instead, let’s focus solely on these chapters. Some of the beach fun from the manga has been cut out – there’s a scene where two guys try to hit on Asahi, and her response is to throw them into the ocean and tell the lifeguard that there are two guys drowning.
Other beach fun in the manga includes a banana boat, Kiyoharu and Kosame having a water fight, canoeing, and Aya and Tsuyuno diving together. These are relatively harmless events that only take up a single panel each, so I can see why they weren’t all adapted.
There isn’t much else that has been changed. The anime has cut a lot of stuff concerning Keisuke – in the manga, he ‘graduated’ from being a Nijimi fan and tried to give all his merchandise to Kaname. He then saw Kaname with Nijimi, and we all know how the rest went.

Well, I enjoyed this episode for the most part. There is one particular scene I want scrubbed from my memory, as nobody should have ever had to bear witness to that.
Moving swiftly on, we got more moments between Aya and Tsuyuno, and that is always a very good thing.

I enjoy writing, manga, anime and video games, so naturally here on my blog, you will find anime reviews, Nintendo news and other such things that I deem interesting.
View all posts by Rory →
This entry was posted in Episodic and tagged Aya Asagiri, Episode 8, Episodic, magical girl, Magical Girl Site, Spring 2018 Anime, Tsuyuno Yatsumura. Bookmark the permalink.