After setting things up in the previous episode, the action picks up in the 20th episode of Katana Maidens ~ Toji No Miko. A few familiar faces unsheathes their swords once more.

The episode begins with Yukari Origami fending off an attack from Princess Tagitsu’s imperial army in order to protect Princess Ichikishima.

News of the encounter with Yukari and Ichikishima soon reaches Yukina, and naturally she isn’t happy to learn that they got away. Yukina believes things would go easier if she was dealing with them herself, but Ichikishima says that people should just do what they can manage.

Kaoru jokes about the sword administration being a black company

Moving on, Akane and Sana brief Kanami and the others about their next mission. They’re told the general whereabouts of Yukari and Ichikishima, and that they need to secure them.
Before they set off, Maki and Suzuka take Kanami aside and let her know that something seems to be off with Hiyori. Kanami is already aware of this – Suzuka doesn’t seem the least bit surprised. 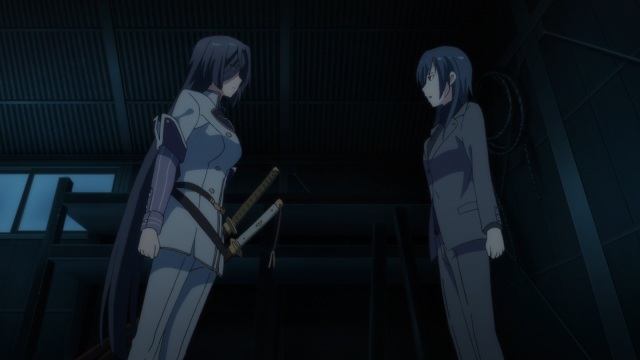 Yuzuki is able to track down Yukari

Moving on, Yukari and Ichikishima have managed to find a shed or something like that to hide out in for the time being. They talk a little, about how Ichikishima wants to prove her existence is not a useless one, and the way in which humans communicate.
They are soon joined by Yuzuki, who sought out Yukari in order to have her condemn her. Yuzuki feels guilty for what she put Yume and her current students through, but Yukari refuses to condemn her.
Soon enough, Yomi appears – she followed Yuzuki in order to find Yukari. Yukari and Ichikishima make a break for it. They soon end up encountering the imperial army again.

Whilst the Toji and Nene engage the enemy, Yukari and Ichikishima use the opportunity to escape once more. Also joining the fray are Maki and Suzuka, though their opponent is Yomi.
Yukari and Ichikishima arrive at Kashima Shrine, where they encounter Princess Tagitsu. Of course, this means it is now time for battles to break out.

First up, Ayumu is as eager as ever to fight Kanami again. She is happy with the strength she has acquired to let her fight equally with the very person she admires. Kanami was happy to meet someone who admires swordfighting as much as she did, and thought it would be fun to get stronger with Ayumu. Ayumu doesn’t understand that, so Kanami puts her all into a single strike.

Maki has someone much more reliable than aradama now

Yomi tells Maki and Suzuka to come at her with the intent to kill, because that is exactly what she will be doing. Maki believes that Yomi can come back from using the aradama – after all, she did. That’s because she has Suzuka.
However, as the battle continues, it seems less and less likely that Yomi will come back. This is something that Suzuka realises.

Finally, we come to Yukari confronting Princess Tagitsu. Tagitsu overwhelms Yukari, but Ichikishima steps up to protect her. She then pretty much tells Yukari to fend for herself for a little longer, whilst she takes off.
Ichikishima finds Hiyori, and says that she wants to save Yukari – by lending Hiyori her power. Hiyori is against the idea at first, but… 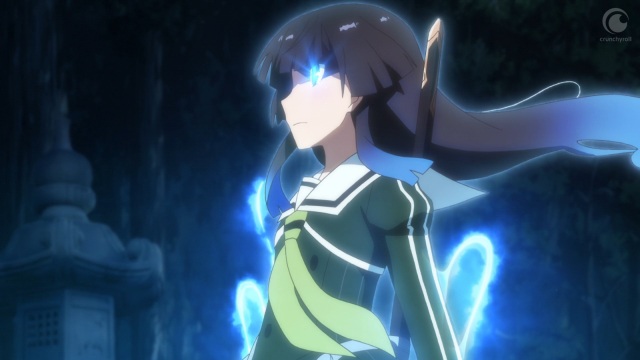 Hiyori becomes a vessel for Princess Ichikishima, though she doesn’t get much of a chance to display her new power as Kanami’s arrival causes Princess Tagitsu to retreat.

That brings this episode to an end, and it was a good one. I had a feeling the action would pick up for this episode, and I was not disappointed.
We got some great fights out of this episode, and seeing Yukari fight as herself was a particular treat. She seems pretty attached to Princess Ichikishima as well…

I suspect Ayumu will have now learnt just how much Kanami totally outclassed her, though perhaps that is for the best. The strength she wields now isn’t something she cultivated by herself, but was given to her. It’ll be interesting to see how she is once she recovers from the battle.
As for whether we’ll be seeing Yomi again or not… well, she isn’t exactly a normal human, but the things she said did have a sense of finality.

This episode ended on a very intriguing note. Hiyori is now the vessel for Princess Ichikishima, but whether that was something she done willingly or not remains to be seen.
Then there’s the small matter of whether Ichikishima’s motives are pure or not. She claimed she wanted to save Yukari, which I can totally see. After all, Yukari saying that she needs Ichikishima more than anyone else certainly sparked something within the aradama.
I guess I’m going to give Princess Ichikishima the benefit of the doubt for now, but if she does pull something I wouldn’t be surprised,