In the 18th episode of Katana Maidens ~ Toji No Miko, the Toji are called into battle once more. We also learn a little more about Nene. 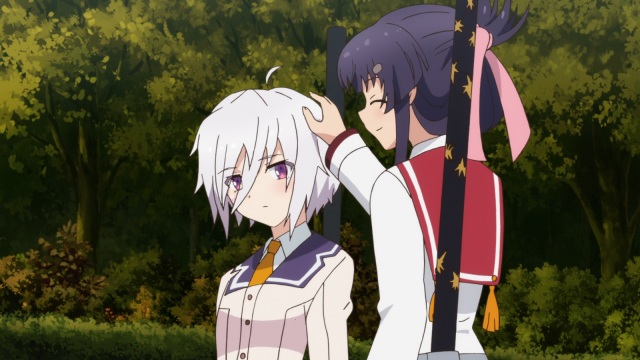 To begin with, we check in with pairs of toji, beginning with Sayaka and Mai. Sayaka has taken some advice she received from Kaoru on board, and was thinking about the situation. Mai can’t help but pat her upon hearing that.

Amusingly, whilst Sayaka was considering the possibility of joining hands with aradama, Kaoru was saying that they should just kill Princess Tagitsu – though perhaps she wasn’t being too serious about that. Also, Nene happens to be absent… 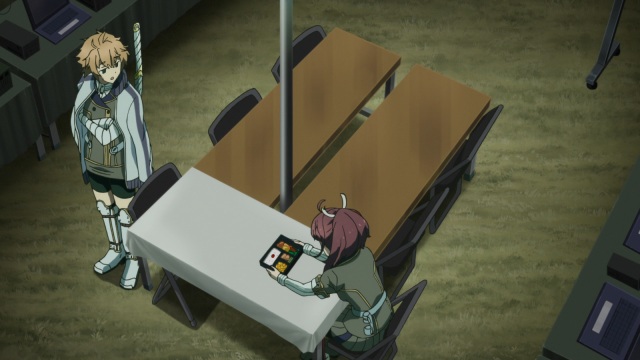 Maki and Suzuka talk how they are effectively bullets for the upcoming bullet – when the time comes, they’ll be the ones cutting through the vanguard. They chose to do so in order to regain trust.

Akane has taken Hiyori and Kanami to speak to Princess Takiri once again. They don’t make much progress, but Kanami does ask if Takiri is up for a sword fight. She gets told to leave.

Nene manages to get into Princess Takiri’s room, and the creature piques her interest. She is able to look into Nene’s memories, and we see the form that Nene originally took on as an aradama and how it ended up with the Mashiko family. This seems to spark a change in Princess Takiri’s attitude towards humans.

Nene finds Kanami, and brings her back to Princess Takiri. Takiri decided to accept Kanami’s offer of a sparring match after all. The two clash blades. After the session ends, Kanami says that she sees Princess Takiri as an ocean that is willing to accept all. Kanami wants to know how Takiri saw her, but the arrival of the enemy means she’ll have to wait for the answer.

The enemy attack begins, and Kanami ends up fighting against Ayumu. Ayumu is able to fight on Kanami’s level – Ayumu is ecstatic about that, but she probably has no idea what is actually happening.
When Princess Tagitsu arrives, Princess Takiri steps out to confront her.

Takiri’s battle doesn’t go well, and she is defeated. Tagitsu has her return to her body. Before Takiri disappears, she tells Kanami that she saw her flying freely. Her last words are to tell the humans to fly high.
Takiri then cuts down all six Toji with little effort. However, Nene presents her with one last obstacle.

Nene’s aradama form was shown earlier during the flashback, and it transforms here in order to fight Princess Tagitsu. Unfortunately, Nene’s power isn’t enough to stop her. With Princess Tagitsu having achieved her goal, she leaves and the episode ends.

I really liked this episode. It was nice to see the other Toji after having them absent from our screens for a couple of episodes.
I also like how Nene played a key part in this episode, persuading Princess Takiri that humans are full of possibilities. Admittedly things really didn’t work out for Princess Takiri in the end, but at least her intentions became good.
It was pretty interesting to see that Ayumu was easily able to keep up with Kanami, particularly with whatever happened to her. However, Kanami wasn’t wearing S Equipment or Storm Armour or whatever they’re calling it, so I wonder if that would have made a difference.

I look forward to seeing what the Toji plan to do next after this setback.