Squad Jam continues in episode 4 of Sword Art Online Alternative: Gun Gale Online. We previously saw part of the battle during the first episode, and now we get to see how LLEN and M fare as the number of remaining teams dwindle.

LLEN puts on an impressive display against her enemies

The episode starts with a reminder of the battle from the first episode, in which LLEN is able to eliminate an enemy team whilst following directions from M.

M has a keen sense of geography

After the battle, LLEN and M meet up once more. M reveals that he has a good sense of geography, and can memorise any map just by looking at it. LLEN guesses that the ‘M’ stands for ‘map’ or ‘mapper’.
After the next scan, LLEN and M make a move. However, they soon come under fire from another team. 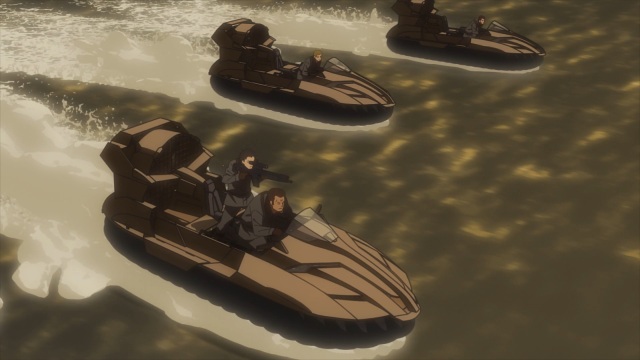 An enemy team got their hands on some hovercrafts

M tells LLEN to make a run for it, which she does. M, however, remains where he is, and reveals what he has been carrying in his giant backpack all this time.

M had been lugging around a barrier, which he sets up and uses. The enemy team’s bullets are unable to pierce it, and M is able to pick them off one by one. When there is one left, M uses a deca-nade. It detonates, launching the last foe onto the shore for LLEN to finish off.

LLEN makes sure to finish off her foe

Following that, we learn that M has shooting experience in the real world. We see a flashback of Pitohui explaining to LLEN about how shooting is simplified in Gun Gale Online. She invited a real life acquaintance with shooting experience to try it out – presumably M.
After that, LLEN and M have a surprise waiting for them with the next scan. 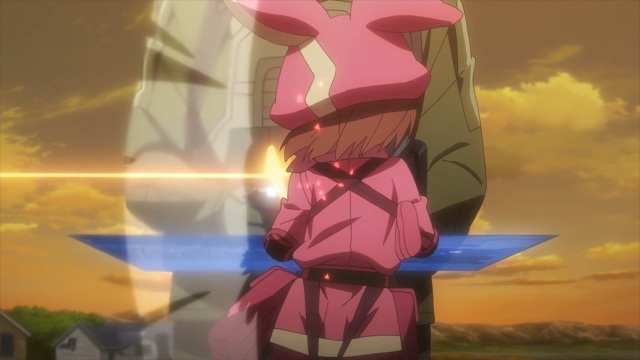 LLEN and M get shot at by a sniper. They take hits, but both survive. M grabs LLEN, and they use a hovercraft in order to escape. After making across the lake to the southwestern wasteland, they gear up for their next encounter with the enemy. Before that though, M has a letter to read.

M points his gun at LLEN

It isn’t made clear what the letter says, but M pulls out his gun and points it at LLEN. There is a gunshot, and the episode ends there – well, almost. There is a scene after the closing credits.

M’s reaction to LLEN turning the situation around is very unexpected. This is where the episode actually ends.

This was a pretty good episode – like I thought last week, the action did indeed pick up here. LLEN’s impressive agility gives us some really interesting encounters. We’ve also learned a little more about M – he has shooting experience in real life. We have yet to know how he gained that experience, and that is something I am interested in learning.
I’m also left wondering if M’s reaction in that final scene is genuine or not. Regardless, LLEN has proven that she is not an easy target to hit, even at close range.

I imagine Squad Jam will draw to a close soon – I have been enjoying it, but I would like to see Pitohui in action once again.

I enjoy writing, manga, anime and video games, so naturally here on my blog, you will find anime reviews, Nintendo news and other such things that I deem interesting.
View all posts by Rory →
This entry was posted in Episodic and tagged Episode 4, Episodic, Karen Kohiruimaki, LLEN, Pitohui, Spring 2018 Anime, Sword Art Online Alternative: Gun Gale Online. Bookmark the permalink.