Episode 16 of Katana Maidens has the central cast of characters reunited for a short while. Soon after that, however, Kanami and Hiyori are given a mission to carry out.

Kanami and Hiyori had been away from each other for a while, so it is only natural that the pair of them are going at it now – and by that, I clearly mean sparring with each other.
After they finish up, the pair are greeted by a group of familiar faces. Mai, Sayaka, Kaoru and Ellen are all there to greet them. With everyone back together, they take the time to celebrate.

More specifically, they celebrate Sayaka’s birthday. Kaoru arranged it, as she knew that they would be all together for it.
After Sayaka blows out the candles on her cake, the conversation soon turns to the hooded Toji. Maki Shidou is the prime suspect, but Mai and Ellen tell them about the hooded Toji they encountered during their mission. They decide they need some answers.

Akane and Sana reveal that there are two people running around wearing hoods. One of them is a toji; in fact, they confirm that it is Maki Shidou. The other one, however, never was a Toji. It is actually Princess Tagitsu, who has manifested as an aradama in human form.
After revealing that, Akane asks Kanami and Hiyori to accompany her to the Ministry of Defence in Ichigaya. It specifically has to be those two, as Akane intends to meet with someone. 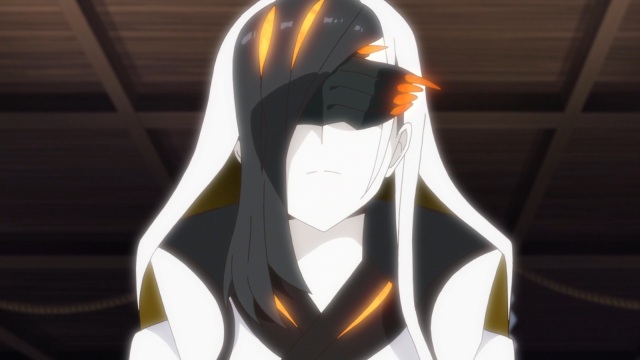 We briefly check in on Ayumu and Miyu, a couple of Toji who were introduced a few episodes back. It seems that something is in store for Ayumu, and it probably won’t be very pretty…

Kanami shares her doubts with Minato

Kanami returns to her dream world once more, and Minato picks up on her doubts pretty quickly. After learning about what happened with Princess Tagitsu, Kanami has become unsure of herself. Minato gives her some words of encouragement.
Kanami’s alarm wakes her up, and she rushes off for her next mission.

It seems that Princess Tagitsu has managed to located Princess Takiri. She easily cuts through several Toji that have been stationed as guards, making it into the building before Kanami and Hiyori attack. As they fight, Priness Tagitsu finds herself having a third opponent to deal with.

Maki appears out of nowhere

The combined efforts of Kanami, Hiyori and Maki are enough to make Princess Tagitsu retreat. However, she will almost certainly return, and it seems that she has a plan to deal with any interference as well.
Learning that Princess Tagitsu has learned of Princess Takiri’s whereabouts, Akane contacts someone; her sister, Yukari Origami.

The episode ends there, and I have to say it looks like things have picked up from last week. Not that I really had any grievances with the previous episode, but I feel that Katana Maidens ~ Toji No Miko is at its best with episodes like this one.
The plot has definitely advanced with this episode, and I am very intrigued to see how everything will fit together. There’s the three pieces of Princess Tagitsu, Yukari Origami will be returning, and there is almost certainly going to be something important in Ayumu’s future.
I guess some fans are still holding out for the return of Yume, as well. I don’t know how likely that is at this point, but all I’m saying is we know next to nothing about Princess Ichikishima at the moment.
…or perhaps she is well and truly dead, and never coming back. That sucks, but it doesn’t change the fact that she was the best member of Yukari’s elite guard.
Though saying that, I have started to appreciate Maki a little more lately.

A good episode, I would say. It had some nice action, it gave some answers for questions that we’ve had for a while now, and plans are being put into motion.