The girls decide to have a pyjama party in episode 12 of Hugtto PreCure!, and we also learn a little bit more about where Hugtan and Harry originally came from.

The girls wearing their pyjamas

The episode starts with Hana shopping with the others. They are getting food for their pyjama party, which will be held at Beauty Harry – whether Harry gives them permission or not.
Whilst the girls eat takoyaki, Hugtan starts calling each of them ‘mama’. Hana, Saaya and Homare all get called mama – it turns out that Hugtan is just calling everything mama.

Hugtan’s first teeth are coming through, so the girls decide to make some food for her. However, Hugtan doesn’t seem to be that keen on eating it.

Whilst Hana isn’t able to get Hugtan to eat, Harry has no problem doing so. After eating, Hugtan drifts off to sleep. Hana decides it is time to watch films whilst eating popcorn. Unfortunately, she forgot to buy popcorn.

Harry just had a flash – hmm, this seems familiar…

Fortunately, Harry happens to have a popcorn machine. With their popcorn ready, they all sit down to watch a film called The Dread Visitor – Hana insisted on watching a horror movie. There are some pretty interesting reactions to the horror film.

Since the horror film is a bit much, they decide to put something else on instead. However, they only have the Dread Visitor series with then.
Everyone ends up going outside.

Outside, Harry reveals to the girls that he and Hugtan came from a world in the future. He came into the past in order to flee from Criasu Corporation, and he is confident that PreCure can prevent that bad future from coming to pass.
He thought they would need four members of PreCure, but he has been proven wrong. The girls may play different music, but it makes a beautiful melody when they play together.
Hana and Saaya’s reactions to Harry’s words are very amusing. However, their conversation gets cut short. 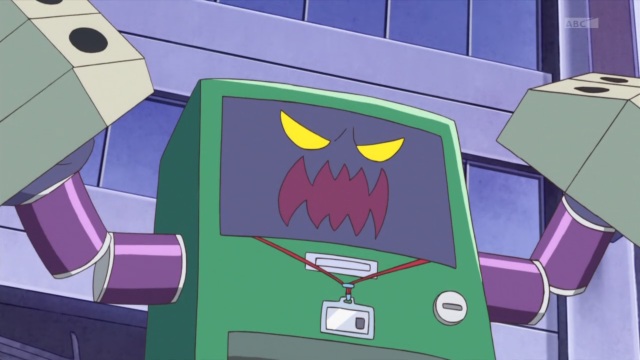 Throughout the episode, Pupple was struggling to gather toge-power. She eventually gathered enough, which meant it was time for PreCure to do their thing once more. This time, however, they have new techniques to go along with the power-up they received in the previous episode. 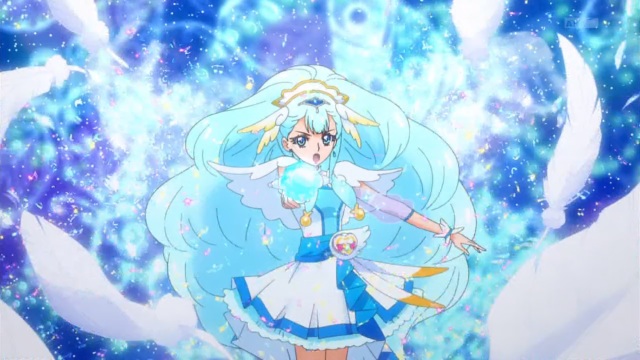 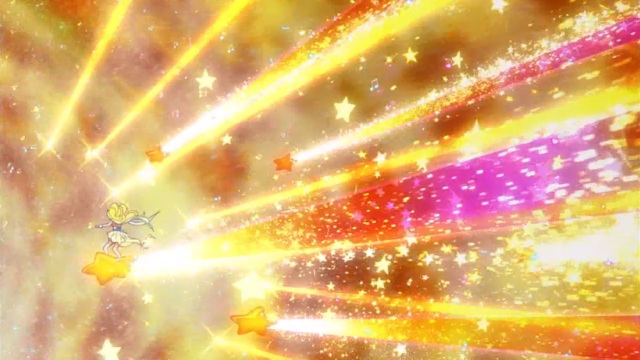 The Oshimaidaa soon falls to the PreCure’s finishing attack, and Pupple retreats. When the girls go back inside, they all struggle to get to sleep.

The girls decide to just talk through the night

Finally, we end the episode with a surprise for Hana.

Lulu will be staying at Hana’s house

Throughout the episode, we saw Lulu gradually deciding that she wanted to learn more about PreCure. Her plan for doing this is staying at the Nono residence – she seemingly played around with the memories of Hana’s Mum.

I thought this episode would be more light-hearted after what happened previously, and it was for the most part. What I didn’t expect was to learn that Harry and Hugtan came from the future.
The Oshimaidaa fight was pretty good as well – I really liked the music for that part, and the showcase of new attacks was neat too.
However, the most notable part of this episode almost certainly has to be that part at the end – when Lulu decides to stay at Hana’s place. I feel like this has some major implications about what Lulu’s role will become in the future. I also find her very reminiscent of Fresh Pretty Cure‘s Eas, which only adds to that.

This episode was better than I expected it to be. We’ve seen pyjama parties in PreCure before, but this one gave us some very interesting events along with some more silly moments.

Next time, Hana’s school gets a new transfer student.