Hugtto! PreCure Episode 8: No Such Thing as Wasted Time

In episode 8 of Hugtto! PreCure, it is Homare’s turn to shine again. A face from her past shows up, and is eager to have her go to Moscow to pursue a figure skating career. 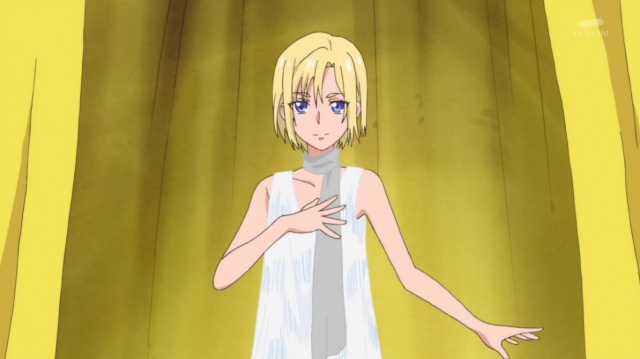 Henri, who also happens to be happy to wear ladies’ wear as long as it suits him

So the person who turned up at the end of previous episode was Henri, who used to train together with Homare for figure skating. Hearing that Homare has gone back to it, he wants her to go to Moscow to pursue the sport further.
He also says right to Hana and Saaya’s faces that they are holding Homare back. Not a good impression to be making there. 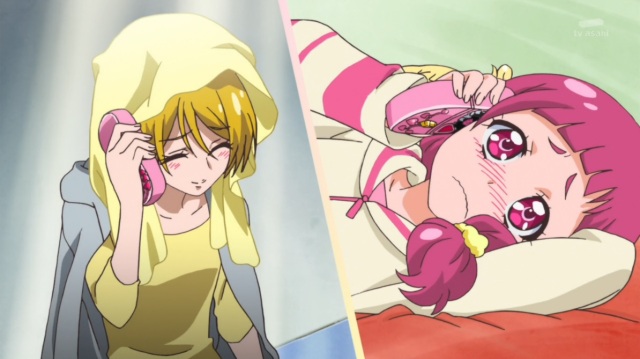 The transformation devices can function as phones

Later on, Hana decides to call Homare whilst she is training. Hana doesn’t exactly know what to say, but it seems that Homare finds some comfort in hearing her friend’s voice. Homare invites Hana and Saaya to go out with her the following day. 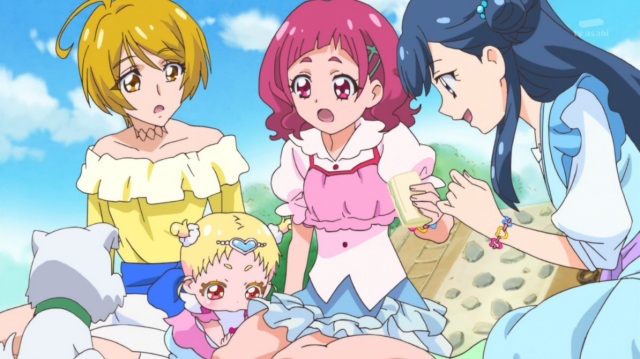 Hugtan stands up for the first time

Hana, Saaya and Homare go out as promised. Saaya talks a little with Homare, and says that her first memories of them sparkle more and more when she is together with them. Harry suggests that the girls may be a little too nice, and should be honest with their own hearts as well.
A little later on, Henri approaches Henri when she is alone and says that she can have a top level coach if she goes to Moscow with him. Hana happens to overhear, and says that she can cheer Homare on.
Henri retorts that she is just adding extra pressure to Homare by doing that, and that anybody can cheer someone else on. He insists that Homare goes with him. 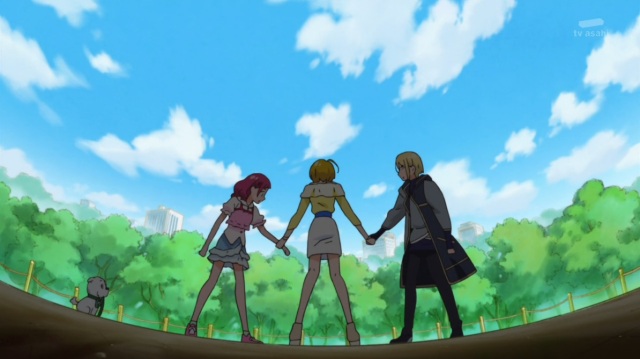 Homare comes to a decision 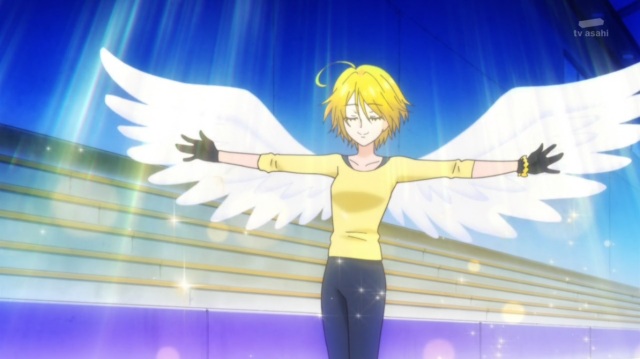 Homare astounds her observers with her ice skating. It doesn’t go perfectly, however; when she tries the same jump that injured her before, she ends up falling. 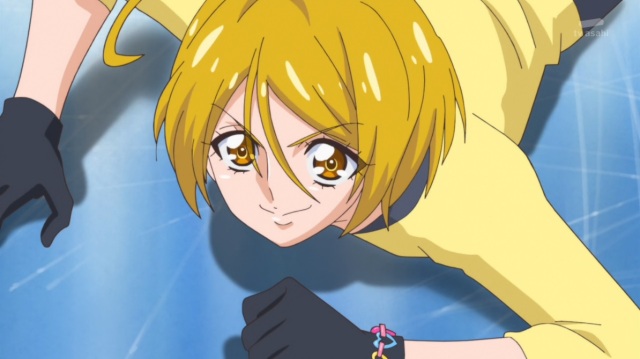 Homare refuses to give up

Homare may have fallen down, but she just gets back up again. She gives it her all, and shines just a like a shining star. After successfully landing that jump, Hana and Saaya rush onto the ice. 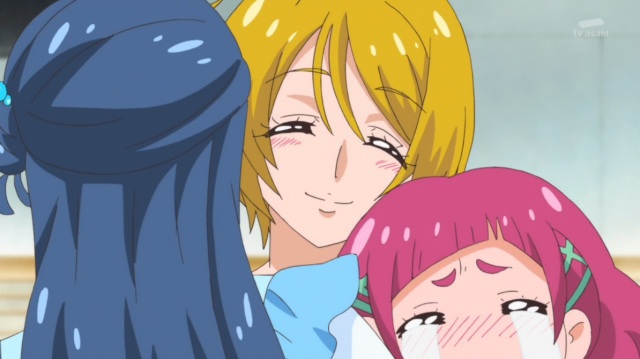 But that’s enough happiness for the moment, it’s about that time for the monster of the week to strike. This time it is summoned by Pupple, who uses the toge-power of the people stuck in a traffic jam. 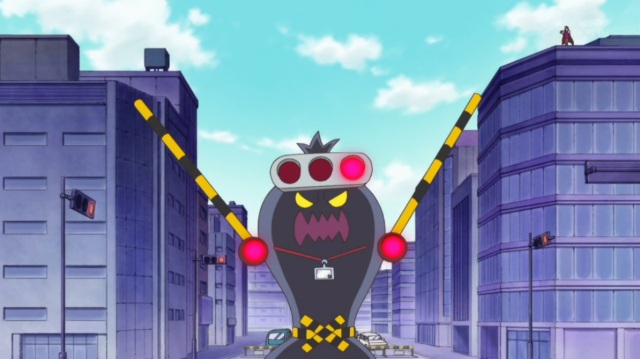 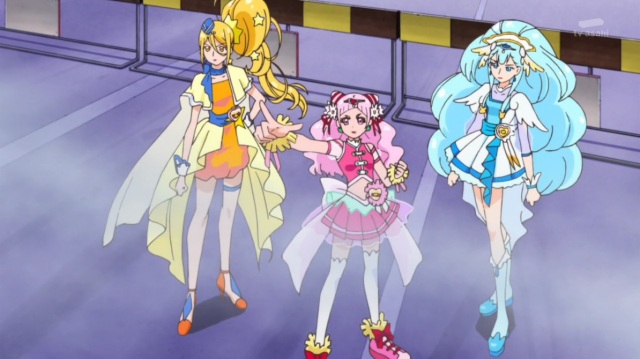 Time for PreCure to do their thing

Since this is a Homare episode, Cure Etoile ends up getting most of the action this time around. When Pupple mentions something about a waste of time, Etoile simply states that there is no thing as wasted time. 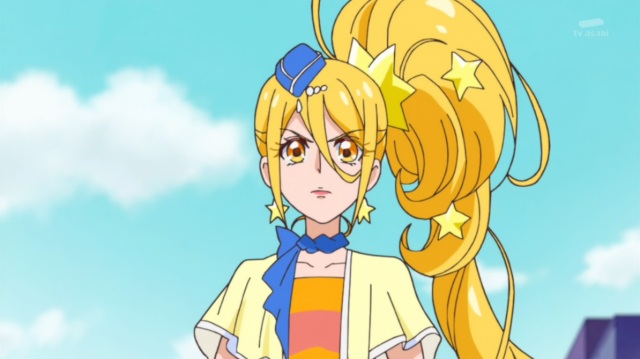 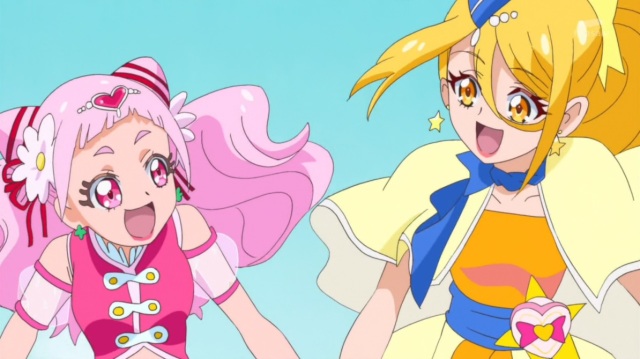 Etoile awakens her second Mirai Crystal, and the monster of the week is eliminated in due course after a display of teamwork between all three Cures.

With the enemy gone, the Cures return to normal. After having seen Homare’s skating, Henri gives up on trying to get her to go to Moscow. Hana also offers to continue supporting Homare however she can. She offers to walk Homare’s dog, Mogumogu, on walks when she is busy with training.

Hana ends up encountering a mysterious man, who has an interesting-looking book. He says something about a beautiful story where people looked forward to the future, full of hope. With those words, he departs.
Finally, there is one last surprise in store for this episode. 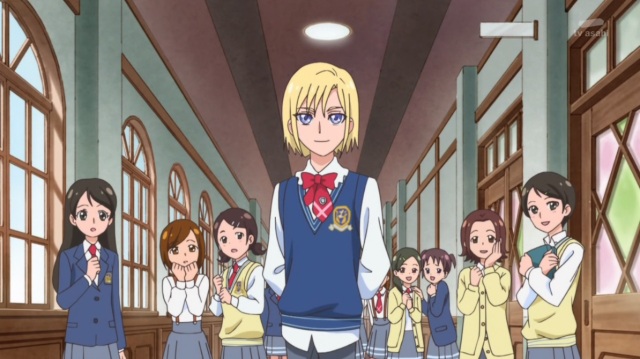 Henri showing up at the school is a surprise, but he also reveals that he knows Homare is PreCure. He keeps that to himself, though.
That brings this episode to an end.

A pretty good episode, I would say. Henri didn’t impress me much with him accusing Hana and Saaya of holding Homare back, but at least he ended up seeing the truth in the end. If he ends up only playing minor roles in future episodes, I won’t really have much problem with that.
Besides, the star here was Homare. She’s definitely gotten over all doubts she had about her figure skating before, and that has allowed her to shine brightly. Hana and Saaya are also there to support her with all they have, and that’s a very good thing.

As for Hana’s encounter with that mysterious man, I’m almost certain that he is involved with the Criasu Corporation in some way. Who knows, perhaps he is the big boss of the place…
Whatever his involvement, we will definitely be seeing him again some time in the future.

This episode also planted seeds of doubt in Hana’s mind about cheering her friends on. I’m going to guess that Hana’s character-focused episode will probably involve her not feeling adequate enough to support her friends. Getting over that will probably be the catalyst for Hana to awaken her second Mirai Crystal, though we’ll have to wait and see whether that will be the case or not.

Next time, Hana and her friends go hiking. They will meet a ‘super cute pretty girl’.

1 Response to Hugtto! PreCure Episode 8: No Such Thing as Wasted Time