After being absent for a couple of weeks, Maerchen Maedchen returns. In preparation for the next round of the Hexennacht, the Japanese team decide to hold a training camp.

Episode 9 kicks off with the last match of the first round of the Hexennacht; China vs. America. Unfortunately, Xuemei is the last remaining member of the Chinese team. We do learn about the Origins of the other American characters – we already knew about Lynne’s Little Matchstick Girl, whilst here sister’s Origin is Santa Claus. 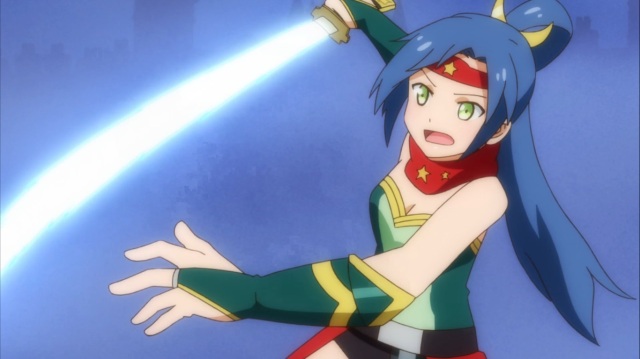 Li Xuemei’s Origin is Journey to the East

So Li Xuemei effectively gets drunk to use her Origin’s ability, as dulls the mind and removes the limits on human abilities. However, Lynne has just the thing to counter that, and the American school is able to claim victory.
For the next night of the Hexennacht, it will be the English school vs. the German school, and the Japanese school will take on the Americans.

Hazuki takes countless pictures of Shizuka in her casual attire

Moving on, Shizuka suggests a training camp at her family home. After all, the other schools have gathered together, so her home will provide them a little privacy. Turns out that the girls from the Coalition and Russian schools will also be accompanying them, at the suggestion of the headmaster.

Everyone wants to try Hazuki’s sandwiches

On the train to their destination, Hazuki realises that she hasn’t joined the conversation. She worries she’ll be left out of everything, but Shizuka notices and soon has everyone queueing up to try Hazuki’s sandwiches.

Ariko helps Hazuki to feel a sense of danger

When the training begins, Shizuka reveals that it is for Hazuki’s benefit. After all, the magic Hazuki used before is still something of an unknown. However, Hazuki’s Castle spell is a solid defensive technique, and something that will help to balance out the Japanese team.
Hazuki’s spell has a limit, and that is reduced even further when strong attacks are used against it. Still, the training helps her to get a better idea of the spell.

The Russians are up for a pillow fight

After being put through her paces, Hazuki is eager to get some sleep at night. However, the Russian and Coalition schools are eager for a pillow fight, so Hazuki slips away. She finds Shizuka on her own, looking rather melancholy.

Shizuka goes over how her mother died in an incident several years ago, and how she is expected to win the Hexennacht in order to restore the Tsuchimikado honour. Hazuki is determined to help Shizuka win.

So it turns out that not even the Americans like Lynne. They discovered the foul play she has been up to and confronted her about it. Angelina suggests they stop, but Lynne is keen to please her father. Besides, she has already played her trick on the Japanese school.

Shizuka is summoned by the Committee of 13, who tell her that they have intel that suggested her mother tried to flee during the incident where she lost her life. They tell her to hand over the Moon Princess Origin to analyse its memories, but that takes six months. It means she won’t be able to participate in the Hexennacht.
The headmaster tries to stop that, but Shizuka hands it over regardless. This means the Japanese team is without their offensive core. However, the Japanese team still has one more member… 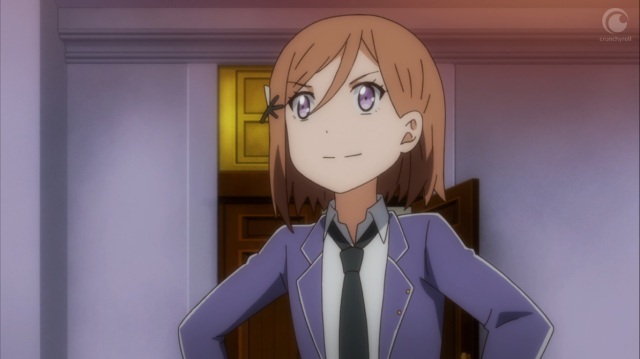 Sachi was hospitalised until now, but she has escaped from the hospital. We’ll have to wait until next time to see how she’ll contribute to the team.

Even after taking a two week break, this episode looked extremely rough in places. I dread to think what it would have looked like had it aired without a break. It may have not been the prettiest thing to look at at times, I did still enjoy the episode.
It’s nice we actually got to see Li Xuemei in action a little, unlike the Indian team. It was only brief, but she got to do more than Mahakali ever did…

As for the main focus of this episode, it was a fun time. Hazuki getting excited over Shizuka in casual clothes amused me a lot, and her happiness at taking a trip with friends was nice to see.
Hazuki is also starting to develop a greater understanding of her magic – well, her defensive magic at least.

I hope that the Japanese school crushes the American school next week, because Lynne is utterly despicable. I assume she was the one who fed the Committee of 13 the false information about Shizuka’s mother. Not even her fellow team members are OK with what she has been doing, though I guess its too late to put a halt of any of that now…
We’ve also got a better idea about the ‘mixed media’ Origins the Americans use. There’s definitely some interesting stuff there, hopefully we’ll get to see those expanded upon a bit when they take on Japan.

Yeah, this episode looked down right ugly at times, that I can’t deny. Regardless, Maerchen Maedchen remains a favourite of mine from this season. It’s nice to have it back – now if it could just improve the way it looks a little bit.

I enjoy writing, manga, anime and video games, so naturally here on my blog, you will find anime reviews, Nintendo news and other such things that I deem interesting.
View all posts by Rory →
This entry was posted in Episodic and tagged Ariko Kasumi, Episode 9, Episodic, Fantasy, Hazuki Kagimura, Maerchen Maedchen, magic, Shizuka Tsuchimikado, Winter 2018 Anime. Bookmark the permalink.