Hana and Saaya are seeking out fellow team members for PreCure in the fourth episode of Hugtto! PreCure. Hana is very keen on scouting Homare Kagayaki, but that just might prove to be a little difficult.
Let’s see how they fare.The episode begins with a brief recap of what happened last time, which also includes Hana swooning over Homare.
Harry also announces he has decided to open a shop called Beauty Harry – it will be a place for hair, make up, fashion and more.

Before class starts, Hana discusses with Saaya scouting Homare for PreCure. She just doesn’t know how to meet her. Fortunately, Homare is in their class, and she sits at the desk behind Hana.

It seems like Hana has something of a crush on Homare

Hana pretty much fawns over Homare, even taking notice of her long, gorgeous eyelashes. Hana also seems to be very happy to be called weird by Homare, too.
Later on, she and Saaya spot her ignoring a teacher. Turns out that they aren’t the only ones spying on her.

As far as these two are concerned, Homare is bad news

Seems like there are rumours about Homare being involved with bad crowds going around the school, but Hana doesn’t buy any of that.
She is still insisting on scouting her for PreCure whilst walking home with Saaya. Coincidentally, they end up bumping into her. She is exiting an animal clinic, accompanied by a dog.

Homare was almost run over trying to save the dog

The dog was a stray that Homare saved from getting run over. In fact, when she saved it, time stopped and she heard Hugtan’s voice.
Moving on, some kids are bullying others over the use of a nearby basketball court. Hana steps up to help the younger kids out.

Hana isn’t a fan of bullying, but being called a grade schooler is probably what irritate her most

Being on the basketball court, it naturally comes down to a game of basketball to see who gets to use it. Unfortunately, Hana and Saaya aren’t very good when it comes to ball games. Fortunately, Homare is willing to take them on.

It seems like Homare is going to score, but she ends up recalling nasty fall she had back when she was an figure skater. Still, Homare’s team are able to win after Homare passes the ball to Hana.
It seems that Homare can see something of her old self in Hana.
After the match, the bullies realise that Homare was a figure skating prodigy. They quickly leave after that.
With the day coming to an end, Homare departs. Hana tells her that she wants to be friends.

Moving on, Homare is out for a walk when she bumps into her coach. The coach is unable to convince her to go back to figure skating, and this causes negative feelings to well up within him.
He then becomes Charalit’s next target.

Charalit uses the coach’s toge-power to call forth an Oshimaidaa. The Oshimaidaa appears before Homare, but Hana and Saaya arrive to protect her. They transform right in front of her, too.

Ange and Yell ready for battle

It seems that Hana and Saaya’s weaknesses for ball sports even carries over into their PreCure forms, as they end up getting overwhelmed by the Oshimaidaa. However, they refuse to give up, and this ignites something within Homare. A new Mirai Crystal appears, and Homare runs towards it. 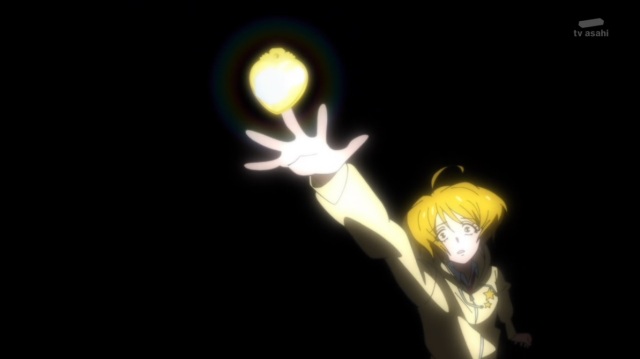 Homare reaches out for her Mirai Crystal

However, Homare’s fall still haunts her and she is unable to reach it. She takes a tumble, and the Mirai Crystal disappears for now.
Homare is left crying on the ground, and the coach’s feelings end up projected through the Oshimaidaa. However, Charalit gets the Oshimaidaa back on track, but Cure Yell is ready for it.

Cure Yell cheers for Homare and her coach

Cure Yell goes on to deliver an epic beat down to the Oshimaidaa, all whilst telling Homare that she shouldn’t give up. The Oshimaidaa is defeated in the usual manner, and everyone goes back to normal afterwards.
Hana cheers for Homare again, but it’s no use. As Homare departs, all that Hana can say is “see you tomorrow”.
This is where the episode ends.

More episodes like this one please. Sure, the previous one wasn’t terrible, but this episode has been the best one so far. There has only been four episodes, so make of that what you will.
I get the feeling I am going to quite enjoy the stuff that revolves around Homare, especially if the episodes that focus on her are this good.
As an aside, there are a few similarities between Homare and Go! Princess PreCure‘s Kirara Amanogawa – though I think I’ll wait until next week to talk a little more about them.

The Oshimaidaa fight in this episode was great. The background music that played when the fight started was great, and then there was Yell’s completely overwhelming the foe. This particular fight scene has made me realise just how much KiraKira PreCure a la Mode was lacking when it came to physical combat.

Amazing episode, and I’m not even disappointed that we only got a tease of the new member of the team. We’ll have to wait until the next episode to see what is in store for Homare’s future.