I am a sucker for Collector’s, Limited and Special Editions when it comes to video game.
Before, I would only buy them if I could afford it – I mean, that’s still the case now, it’s just that I have more money now. As such, I figured I would treat myself to the Bayonetta Special Edition for the Nintendo Switch.
As has been the case with past unboxing posts, this will be a series of photos showing the contents of the Special Edition. Photos taken from my phone, so definitely not the best quality available out there. Still, they get the job done.
Enough of all that, though. Let’s just take a look at the Bayonetta Special Edition.

The box that contains all the items

Upon opening the parcel that the Special Edition arrived in, this – and one other item – was what was inside. That’s good, because this was what I ordered. I wouldn’t have been best pleased if it had been something else.
The other item, by the way, is a poster. I received it because I ordered from the Nintendo UK store.

This is what you get after you remove the sleeve

After removing the sleeve, the next step is to simply open the box. I’ll go through each item as you would first encounter them.

The case for Bayonetta 2 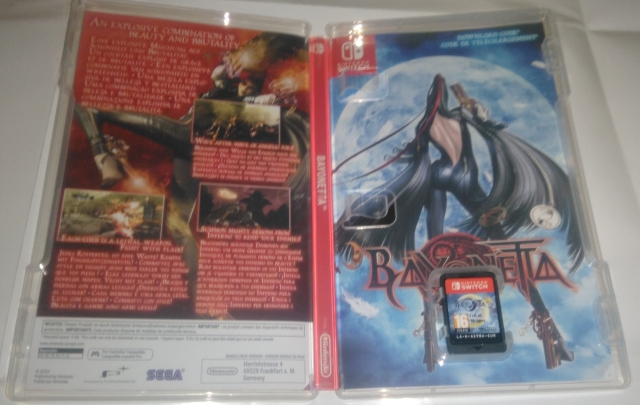 The game has a reversible cover

The first thing you’ll see upon opening the box is the case for Bayonetta 2. Sure enough, the Nintendo Switch cartridge can be found inside. You’ll also see that there is a reversible cover, so you can switch it around if you’d rather have it look like a case for the first Bayonetta.
Talking of the first Bayonetta, this came with a code to download that title from the Switch’s eShop. I have redeemed that code at the time of writing, and plan to play through the first game before starting on the second. 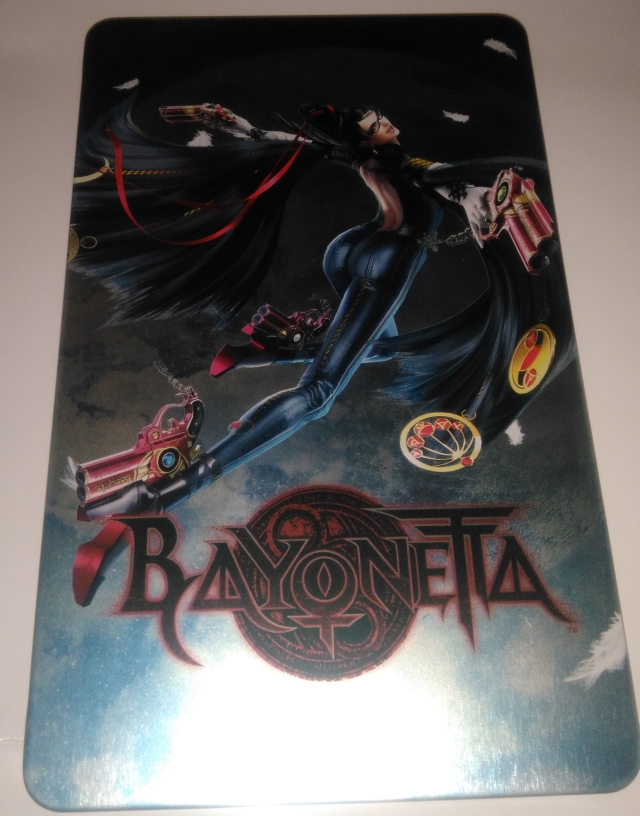 One side of the SteelBook

The other side of the SteelBook

Next is the steel book case. As you can see, one side features Bayonetta, and the other side has Bayonetta 2. It’s nice, though kind of difficult to take a photo of when you are using a flash. Shiny surfaces really enjoy reflecting light…

Next up, an item that I will almost certainly never use: stickers. They feature art from the games, and are all right I suppose. Not exactly the most thrilling item, though. Fortunately, I like the last item a lot more than the stickers.

Finally, we have the verse cards. If you want a closer look at them, you’ll have to go somewhere else. All I’m going to offer you here is a shot of all of the cards together. Aside from the game itself, these are probably my favourite items within this Special Edition.

Now with that all said and done, I’m off to play Bayonetta, as well as a bunch of other games that I am steadily working my way through.

I enjoy writing, manga, anime and video games, so naturally here on my blog, you will find anime reviews, Nintendo news and other such things that I deem interesting.
View all posts by Rory →
This entry was posted in Uncategorized and tagged Bayonetta, Bayonetta 2, Nintendo, Nintendo Switch, PlatinumGames, Sega, Unboxing. Bookmark the permalink.