It’s only taken six episodes, but Maerchen Maedchen now actually has something resembling a proper opening animation rather than scenes taken from the show and put together – it seems there was a reason we had to wait, and that is revealed in this episode. 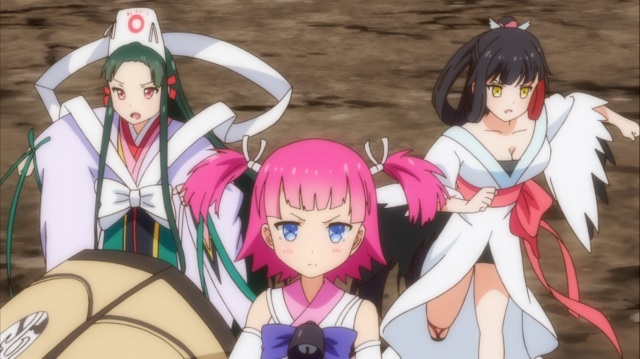 The begins by showing us the how the battle between the Japanese and Coalition schools went before Hazuki arrived on the scene. Through the battle, we get to see the various powers the girls wield thanks to their Origins.

Charles’s Origin is Puss in Boots

Shizuka and her allies are able to make it into the fort, but they end up being split up. Ariko is forced to confront Charles Giovanni, who is the Origin Master of Puss in Boots. As such, she is skilled with a sword, and her power involves telling little lies.

Molly’s Origin is The Pied Piper of Hamelin

Elsewhere, Shizuka finds Mai who has been defeated off screen. Also present are Molly and Yumilia. Molly tries to attack Shizuka, but Shizuka easily defends herself.
Yumilia eliminates Mai from the competition, and then starts saying how the Moon Princess’ Origin Master is cursed to be alone. Shizuka is unable to maintain her composure, and unleashes her strongest attack.

Shizuka aboard the moon ship

Shizuka unleashes an attack on Yumilia. This is where Yumilia uses the ultimate magic of her Origin, Shuten-Doji. She has magic that lets her steal other magic, and that’s exactly what she does with Shizuka’s attack.

Yumilia says that a Maedchen has to feed their Origin the greed and misery it wants in exchange for its magic. That is the reason why Yumilia steals.
Hazuki doesn’t believe that; after all, a book is just a book. She starts picking apart the story of Cinderella, and saying how she would rewrite.
Yumilia’s patience begins to wear thin, so she attacks Hazuki.

The Cinderella Origin appears, despite having been sealed away previously. Hazuki decides to make a new contract with it. When she does so, the story of Cinderella seems to disappear. Actually, a new story is being born – one that comes from Hazuki. Cinderella gives the new story the title of “Cinderella Doesn’t Look Back”, and then she is able to use Buchhülle.

It’s been a while, but Hazuki has finally transformed

Yumilia attacks Hazuki, but Hazuki is able to protect herself with her magic. Following that, Yumilia’s power begins to go out of control. Hazuki decides she should do something, and that is create new magic. 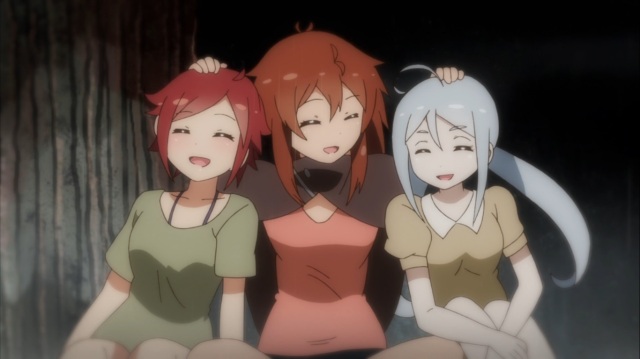 Yumilia is happy as long as she is with her friends

Hazuki’s magic helps Yumilia realise that it doesn’t matter where they call home; as long as she is with Charles and Molly, she can be happy.
The Coalition school admit defeat afterwards, meaning that the Japanese school is able to enter the Hexennacht – assuming the higher-ups don’t have any problems with what happened.

Hazuki was able to find her new story

After the battle, the magic of Hazuki, Shizuka and Ariko spreads out to Origin Libraries across the world. After that, Hazuki pretty much repeats her first meeting with Shizuka, with her saying she liked her since they first met and asking to be friends. Of course, they are already friends.

I really liked this episode of Maerchen Maedchen – Hazuki’s speech to Yumilia about finding her own story was great. The way she picked apart Cinderella was fairly amusing as well – I pretty much agree with her on the points she raised.
There was also some action before Hazuki’s arrival, which meant we got to see a couple more Origins. Not that Charles or Molly got to do a whole lot, but at least they actually got to do something.

Of course, the highlight of the episode is Hazuki’s first successful use of Buchülle. It just happened without much fanfare, but it was something I’ve been waiting six episodes to see. Now I want to know just how far her powers can go, particularly with her being able to create new magic

With the qualifying match over, I guess the next thing to look forward to is the Hexennacht itself. A whole host of Origin powers are waiting to be revealed, and I am looking forward to that.

I enjoy writing, manga, anime and video games, so naturally here on my blog, you will find anime reviews, Nintendo news and other such things that I deem interesting.
View all posts by Rory →
This entry was posted in Episodic and tagged Ariko Kasumi, episode 6, Episodic, Fantasy, Hazuki Kagimura, Maerchen Maedchen, magic, Shizuka Tsuchimikado, Winter 2018 Anime. Bookmark the permalink.