The date of the preliminary match between the Japanese and Coalition schools draws nearer in episode 5 of Maerchen Maedchen. Meanwhile, Hazuki comes to terms with the events of the previous episode.

Last time, Shizuka told Hazuki to return home. It was in order to protect her, but Shizuka didn’t say that part out loud.
As such, this episode begins with Hazuki talking to the headmistress, and revealing that she has ended her contract with the Cinderella Origin. The headmistress gives Hazuki some magic medicine that will make her forget all about the magic world, the people she met there and everything that happened.
So with that, Hazuki returns to her normal every day life in the non-magic world. However, she does start to get along better with her family – Saeko and Misa – so it’s not all bad. 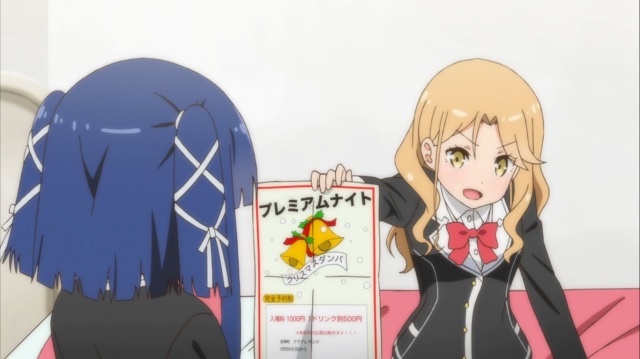 Misa is able to pick up that something has happened between Hazuki and the person she was seeing, so I guess she invites her along to a Christmas dance party to try and cheer her up. Hazuki claims to not have any suitable clothes for it, but Misa knows about a blue dress that Hazuki owns.

Back to the magic world, and the Cinderella Origin is sealed. Shizuka reports this to the headmistress, and then they discuss the upcoming qualifying match for the Hexennacht. With Hazuki gone, the conversation turns to the new third team member. 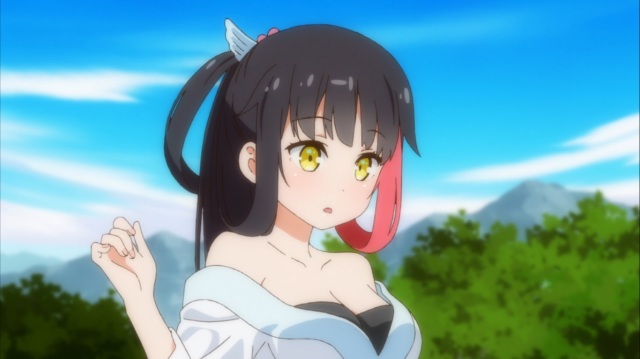 The newest addition to the Japanese team is Mai Sadohara, who is the Origin Master of the Grateful Crane.

Returning to the regular world once again, Hazuki ends up going to the library that leads to the magic world. There, she encounters the headmistress, who knows that she hasn’t taken the medicine.
The headmistress also has a story to tell her.

The headmistress’s story is about a powerful Maedchen

The headmistress tells Hazuki about a Maedchen who wanted to save everyone – even Stains and Flecks. Knowing that most people would laugh at her dream, she only let her closest friends know.
However, after fighting in the Hexennacht, the Maedchen gave up her contract with the Origin and disappeared.
This particular Maedchen is one that the headmistress can’t remember – it seems that she consumed the magic medicine once before in her life. Hazuki is able to figure out that the Maedchen the headmistress was talking about was the Cinderella Origin Master. Before the headmistress returns to the magic world, she tells Hazuki the time of Shizuka’s upcoming match.

The day of the match arrives, and Hazuki prepares to go out to the dance party with Misa. The blue dress she owns originally belonged to her mother, so it quite some sentimental value to it.

Hazuki looks good in her dress

Whilst Hazuki is doing that in the real world, the fighters are preparing for their match in the magic world.

The time for Shizuka’s match arrives, and it is decided it will be a castle siege. The two teams have to race to a castle, and the first one there has to defend it until time runs out. The attacking team has to make it to the throne room to win.

Hazuki’s family is there to support her

Focusing on Hazuki again, we get some family bonding time between her, her Mum and her sister. Saeko actually brought some high heels to match Hazuki’s dress, and we get a fairly sweet scene of the family getting along together.
After talking to them both, Hazuki is finally able to make a decision. She rushes out the house and straight to the library, where she is desperate to return to the magic world once more.
She even smashes the magic medicine and says that she will no longer run away. All she wants to do is see Shizuka.

The headmistress lets Hazuki into the magic world

Upon hearing those words, the headmistress opens the door for Hazuki, and tells her to hurry. She’s also arranged things so that Hazuki can go straight to the place where Shizuka is.
It also turns out the medicine that the headmistress gave Hazuki was actually just water. It seems she knew all along that Hazuki would be coming back.
We then see that Shizuka’s team have not been faring well against Yumilia’s team.

Hazuki falls from the sky

The episode ends with Hazuki descending from the sky.

I was hoping that the separation between Hazuki and Shizuka wouldn’t last long, and as such I am satisfied with this episode. I suppose technically they aren’t back together properly just yet, but Hazuki realising what it is she wants and rushing back the magic world certainly satisfies me.
Plus, we also got to see her bonding with Saeko and Misa – I doubt the Hazuki we saw at the beginning of the season would have ever done that. It’s nice to see her character progress as it has, even if those two are slightly off the mark when it comes to the gender of the person that Hazuki is seeing. Still, they’re happy to support her, and that’s all that really matters.

However, the real MVP of this episode has to be the headmistress – who proudly declares that she is almost 40 years old during the next episode preview. It also seems her Origin has some rather interesting powers, which is why I am very curious to learn what it is.

Hazuki may have returned to the magic world, but we’ll need to wait until the next episode to see how the reunion between her and Shizuka plays out. I’m guessing we’ll also probably see the result of the qualifying match as well.

I enjoy writing, manga, anime and video games, so naturally here on my blog, you will find anime reviews, Nintendo news and other such things that I deem interesting.
View all posts by Rory →
This entry was posted in Episodic and tagged Episode 5, Episodic, Fantasy, Hazuki Kagimura, Maerchen Maedchen, magic, Shizuka Tsuchimikado, Winter 2018 Anime. Bookmark the permalink.