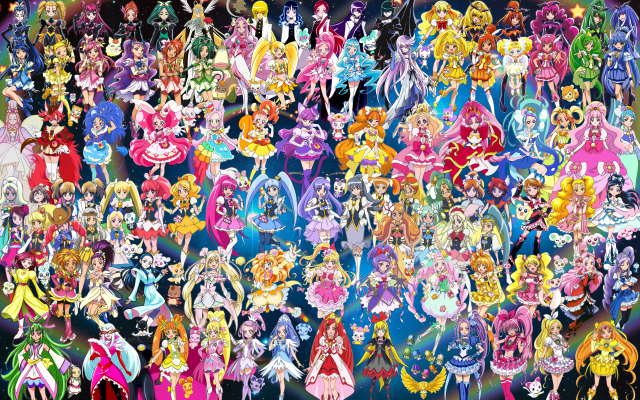 With KiraKira ☆ PreCure a la Mode concluding, it is now about that time of year that I update my ranking of each and every PreCure season.
As has been the case for previous years, this is a list that ranks all the seasons of PreCure from worst to best. As tends to be the case for these things, this is all my own opinion. My favourite season of PreCure may not necessarily be yours.
The seasons that are direct continuations will be grouped together, simply because that make things slightly easier for me.
KiraKira ☆ PreCure a la Mode is the newest entry to the list, but where did it place? Well, you’ll just have to read on to find out.
Yes! PreCure 5 and Yes! PreCure 5 GoGo!

There are only three seasons of PreCure that I dislike, and this iteration makes up two thirds of them. Back when I was working my way through every season of PreCure, this was a major sticking point for me.
I really dislike lead Cure, Cure Dream – I find her voice really grating. Also, the whole romance thing between her and Coco – one of the fairies – was not something I enjoyed at all. In fact, the fairies are all pretty terrible, too.
I did like the Yes! PreCure 5 film, and Cure Aqua was fairly decent too. Those were about the only positives to come out of these seasons for me. 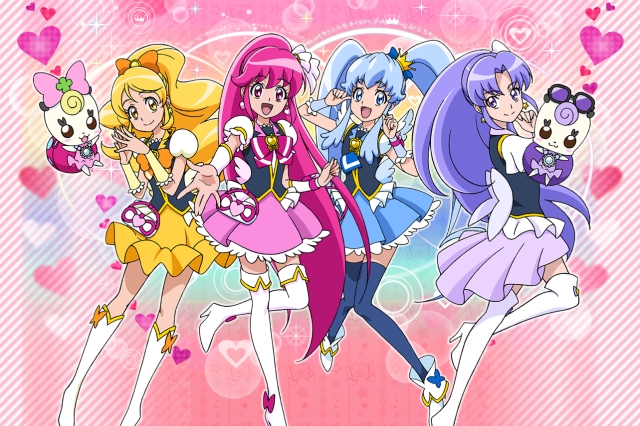 HappinessCharge! aired during PreCure‘s 10th anniversary, and I found it a pretty disappointing way to celebrate that milestone. There are some genuinely good ideas to be found in this instalment; I did like the international Cures, and PreCure Hunter Phantom is one of the better villains in the franchise.
However, this season also tried doing romance, and that was pretty much just a big old mess. I really didn’t enjoy sitting through all that. Considering that was a major part of the season, it really drags it down. 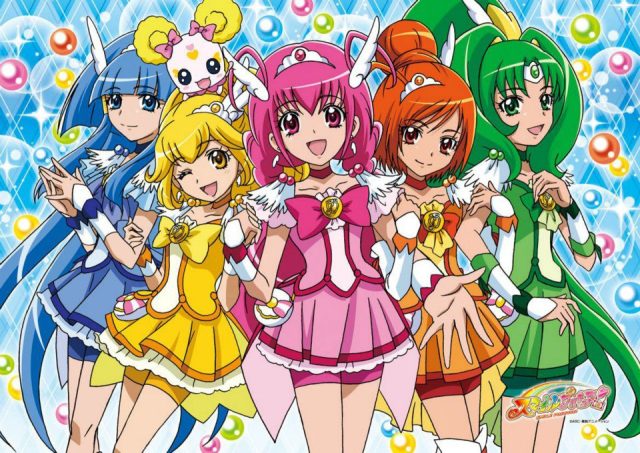 …or should I call it Glitter Force? No, no I won’t. Fair play for trying to get PreCure to a wider audience, but why change so much? Surely there’s no harm in exposing a younger audience to foreign cultures?
Whatever, Glitter Force has no bearing on what I think of Smile PreCure!. Unlike the previous entries on this list, I actually enjoyed this season. It was let down by having the second half of the season effectively be a repeat of the first, but there is a lot to like as well.
In particular, I still think that Joker is one of the best villains from the PreCure franchise. The Cures’ respective fights against the villains themselves are also amazing, with Cure Peace and Cure Beauty arguably getting the best ones.

This is where it all began for PreCure. I respect the first two seasons for giving the world PreCure, but later entries managed to appeal to me even more than this one.
These seasons are where the hard-hitting physical combat and yuri undertones that the franchise is known for were introduced.
It’s not all good, though – the fairies are particularly annoying. Not as bad as in Yes! PreCure 5, but they aren’t really characters I think back fondly on.

After suffering through two seasons of Yes! PreCure 5, Fresh Pretty Cure! was true to its name and a breath of fresh air. It was something of a reboot, and I would say it was the kick up the arse the franchise needed.
This is the point where the fairies started to become more tolerable, with Tarte being one of the better fairies from the franchise. Chiffon isn’t too bad, either, until a certain phrase starts getting repeated over and over later on the season…
For me, the best thing to come from Fresh Pretty Cure! was Cure Passion’s character arc. It’s worth watching this season just for that alone.
Also, bonus points for having the most unique antagonist in the franchise. 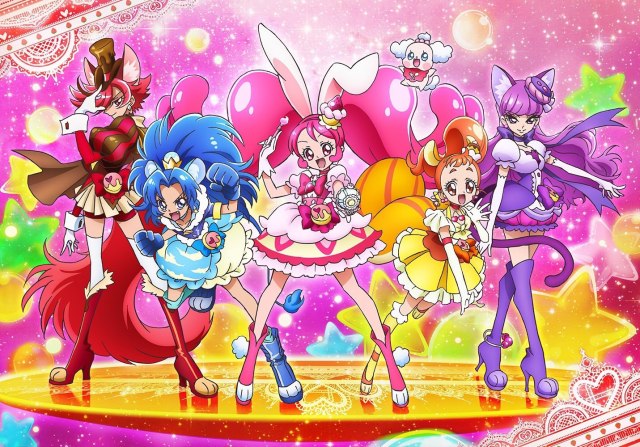 Here we have it; the newest entry on this list, KiraKira ☆ PreCure a la Mode. This season excels when it focuses on its characters, and fortunately there are a fair few character-focused episodes.
It may also be the season that goes the furthest with the yuri subtext that the franchise is known for – so much so that it might even go beyond subtext, depending on who you ask. This is with two characters in particular: Yukari (Cure Macaron) and Akira (Cure Chocolat). The 25th episode is my favourite of this season, because of this.
Whilst there are some amazing episodes in this season, it has its share of duds as well. I guess that’s to be expected; not every episode can be a winner when you have 49 of them.
It’s pretty much standard procedure for the cast to be expanded beyond the initial characters, and KiraKira ☆ PreCure a la Mode is no exception. However, I feel it goes a little too far with that, and certain characters don’t really add much. 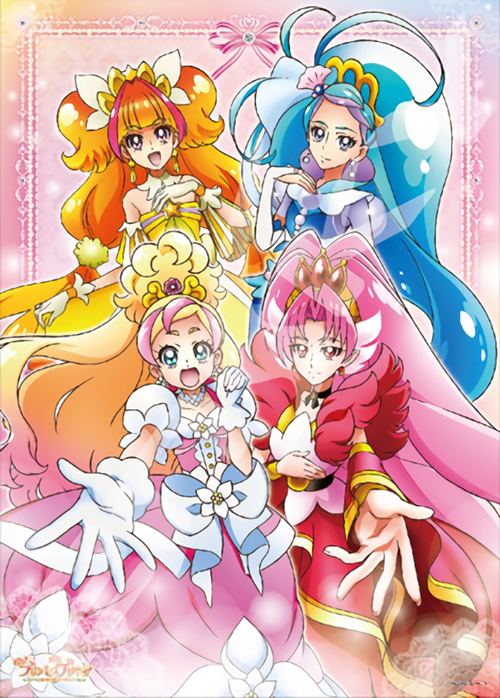 Go! Princess PreCure has a strong princess theme running through it – but what do you expect? It’s in the name.
There is a prince involved, but he’s actually a decent character. In fact, there were jokes about him being another Cure, since that’s how actively he got involved.
What makes Go! Princess PreCure particularly noteworthy is its themes of dreams. Each of the main characters has their own goals that they want to pursue, but they discover that achieving them won’t be easy and they may need to make sacrifices. Of course, it is only fitting that the villains target dreams.
Talking of villains, Go! Princess PreCure is another season with a particularly good one. He doesn’t seem to be much at first, but things change quite a bit as the plot progresses.
Also, Yui Nanase still remains one of the best non-Cure human characters in the franchise.
There’s still some yuri subtext in this season, but other season have more to offer.

Going into Splash Star from Max Heart may leave you with the impression that these new characters are just clones of Nagisa and Honoka. I’ll admit it is that way, at first. However, stick with it and Saki and Mai develop into their own characters.
Splash Star is also notable for giving the Cures different forms – something we won’t see again until Maho Girls PreCure!.
Stick with Splash Star for long enough, and you’ll get to the introduction of Michiru and Kaoru. This is where this season starts becoming its own thing.
I also still firmly believe that this season has the best final battle of any season of PreCure.
I’m actually considering rewatching this season at some point, as I’ve seen so much PreCure since I last watched it that I need to refresh myself on this season. 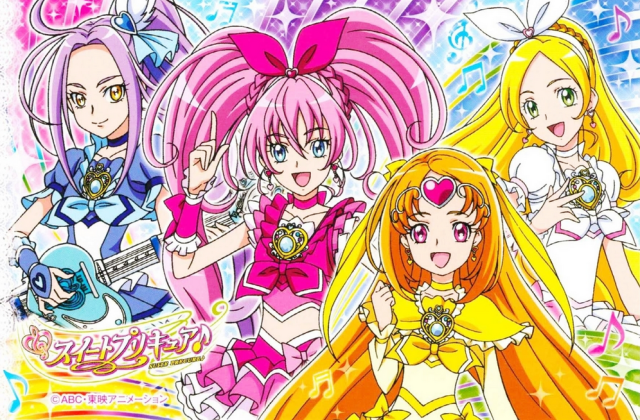 The Suite team: Cure Melody, Cure Rhythm, Cure Beat and Cure Muse. The fairies are Hummy and the Fairy Tones.

Being a cat lover, it should come as no surprise to learn that my favourite PreCure fairy mascot is Hummy, from this season. There have been some very good mascots since Suite PreCure♪, but it’s hard to beat a cat. Hummy being a cat isn’t the only reason I like her so much – she has an interesting relationship with a certain other character.
Talking of relationships, Hibiki and Kanade are up there as one of my favourite PreCure pairings. Not quite my favourite, but certainly very notable.
Cure Beat is also a very good addition to the cast when she arrives.

Many PreCure fans consider HeartCatch to be the best entry of the franchise, and that is for very good reason. It arguably has the strongest writing of any instalment, and I would say that this is due to Cure Moonlight’s story.
Cure Moonlight is still one of my favourite Cures, and part of the reason comes from her story in HeartCatch. She has a close connection to one of the villains, and that whole story plays out in spectacular fashion.
Whilst Cure Moonlight may be the star of the show for me, you can’t ignore the other Cures. Cure Blossom’s growth over the course of the series is a wonderful sight to behold, and Cure Marine and Cure Sunshine certainly have plenty to contribute as well. In fact, Cure Marine may very well still be the funniest character in the franchise. 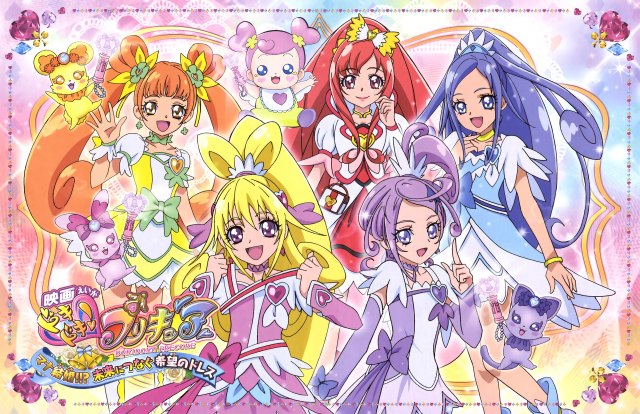 I pretty much bring this up every time I mention DokiDoki, but there is a myth arc that runs throughout. Something related to the overall plot happens in every episode. It might be a minor thing, but it is there. It would be a really bad idea to cut episodes considering it has a continuity that runs throughout the entire season…
A major factor of my enjoyment of PreCure comes from the potential yuri that any given season may have. It is said of DokiDoki! PreCure that it is actually a stealth yuri harem. I can’t really argue with that, and that’s why it gets placed so high on my list.
It pretty much centres around Mana Aida – Cure Heart – and there are plenty of girls who show some sort of affection towards her. I will always consider Regina to be the best match for her. The reason for this? The way Regina says Mana’s name – oh, and the two of them sleeping in the same bed, actually saying that they love each other… the list goes on and on.
I love DokiDoki! PreCure but I will hold my hands up and admit that Cure Heart does steal the spotlight. I don’t mind so much, but there are other characters who deserve to get some attention. 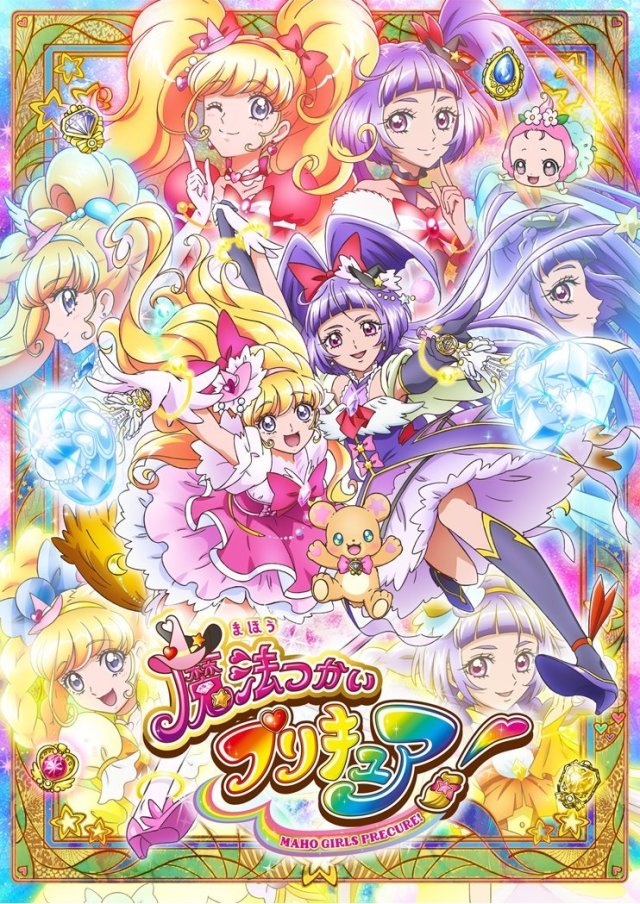 The Maho Girls team: Cure Miracle and Cure Magical. They are pictured here in their different Styles. Mofurun and Haa are the mascots for this season.

I honestly don’t think Maho Girls PreCure! will ever be knocked off top spot as my favourite PreCure season. There is just so much here that completely appeals to me – the Magic World, a magic school, the different Styles the Cures have… lots of boxes being ticked.
The relationship between Mirai and Riko (or is it Liko? Wikipedia, the PreCure wikia and TV Tropes all have her name as Riko. I’ll use that, because I think Riko sounds better) is just one more thing that appeals to me. They form a very close relationship, and even end up raising a baby together.
If you were to ask me my favourite PreCure couple, it would be between Mirai and Riko, and Yukari and Akira. I’d have to flip a coin or something…
I already mentioned the Styles – in this season, the Cures have four different ‘Styles’ that provide different abilities. My favourite is Sapphire, which is one of the instances of Cures actually naturally possessing the power of flight.
The supporting cast are all very good as well, whether they are from the Magic World or not.

That concludes my PreCure ranking for this year. Maho Girls PreCure! is going to maintain a very strong hold on that top spot, I reckon.
I feel like I may need to rewatch the earlier seasons of PreCure – it is entirely possible doing that could have an effect on the ranking. However, I’m not sure I’d be able to find the time to do it, so I’ve pretty much got to rely on my memory for them.

Regardless, let’s do this again in about one year from now, when Hugtto! PreCure has concluded. Let’s just hope PreCure‘s 15th anniversary goes better than it’s 10th…