Katana Maidens ~ Toji No Miko Episode 4: A Blade That Protects

Kaoru and Ellen don’t really get the opportunity to relax

Turning attention to Ellen and Kaoru, they are trying to relax and soak up the sun – despite it being too early in the year to do that. However, someone calls Ellen and informs her that the pair have a mission.
Kaoru tries to duck out of it by saying that she sent her okatana back home. However, her blade soon finds its way back to her…

Hiyori says that she and Kanami should go their separate ways

Hiyori has come to realise something; Kanami’s blade is meant to protect. However, Hiyori’s objective is to kill Yukari Origami, so she doesn’t need a blade that protects – she needs one that can kill.
Kanami and Hiyori do end up going their separate ways. Whilst that happens, Sayaka returns and is scolded for failing her mission. We see later on that Yukari Origami is preparing her elite bodyguards for a mission as well.
When Kanami is on her own, Ellen and Kaoru appear in front of her.

Kanami actually struggles a little fighting against both Ellen and Kaoru – they move as one. However, it turns out that Hiyori hadn’t gone very far and she joins the fight as well.

As the battle goes on, Kaoru and Ellen have a surprise in store. They just need to wait a few seconds for it to arrive… 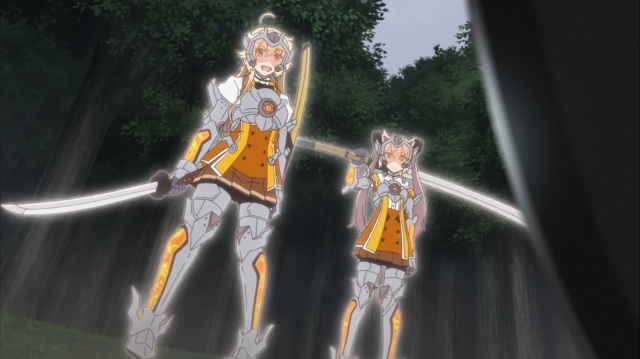 Ellen and Kaoru use S Equipment, which is generally used for completely annihilating aradama. However, Kanami and Hiyori have a plan: retreat.
The launch of the S Equipment also doesn’t go unnoticed…

Kanami says that Hiyori’s sword is heavy with her conviction

Finding a place to take shelter from the rain, Kanami tells Hiyori how her blade feels heavy. Kanami swears to protect Hiyori, and make sure that she only kills her target and nobody else.
Hiyori shares some more about herself with Kanami; in particular, why she is doing what she is doing.

The episode ends with Yukari’s elite guards preparing to do some hunting on a mountain.
Another fairly decent episode of Katana Maidens ~ Toji No Miko. We know now a little more about Hiyori, and we actually got to see how skilled Ellen and Kaoru are when they can fight in the way they are most comfortable.
I quite enjoyed the Kanami & Hiyori vs. Ellen and Kaoru fight. The music there was pretty good, and some new techniques were demonstrated. We have also seen that whilst Kanami is skilled with her okatana, she won’t easily be able to win every battle.

I enjoy writing, manga, anime and video games, so naturally here on my blog, you will find anime reviews, Nintendo news and other such things that I deem interesting.
View all posts by Rory →
This entry was posted in Episodic and tagged Action, Episode 4, Episodic, Fantasy, Hiyori Juujou, Kanami Etou, Katana Maidens ~ Toji No Miko, Winter 2018 Anime. Bookmark the permalink.